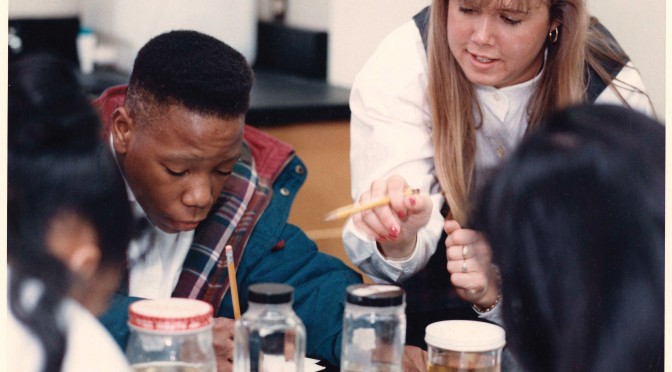 Towson community members and visitors from local public schools will address economic and educational disparities that students of color face in the Greater Baltimore region on Oct. 7.

Towson University and the College of Education  will host an event titled “Envisioning Equity in Greater Baltimore’s Classrooms,” in the West Village Commons from 8:30 a.m. to 4:30 p.m. to recognize these issues and promote students’ long-term success.

Jessica Shiller, an assistant professor of education in the department of instructional leadership and professional development, hopes the gathering will inspire attendees to think about how black and brown youth are treated within the public education system, and to consider ways of addressing those issues.

“We want people to come away with real ideas, real plans for action,” Shiller said. “And from the University perspective, we want to be at Towson … playing a role to take that further.”

Nicole Gruber, an education major, said that working to dismantle implicit biases in education is a continuous process and that those biases must be addressed system-wide.

“Unfortunately, inequity in education stems from greater systematic inequalities and racial biases that are impossible to uproot overnight,” Gruber said. “But, for now, we can set manageable expectations for our students, create more after school programs, create diverse curricula, supplement PTA programs with school based programs, and most importantly, give a platform to POC leaders and educators.”

Those experiences can adversely impact students’ ability to learn, and can actually manifest themselves in behavior that teachers then punish, Shiller said.

“A student who hasn’t had enough to eat can’t focus in the classroom, acts out or does something that the teacher sees as breaking the rules or not listening and that student gets punished,” she said. “They get sent out of the classroom or they get detention or that can even result in suspension.”

Instead of punishing students for misbehavior, Shiller hopes the gathering will educate teachers about the potential causes of that behavior, and encourage educators to use restorative practices instead of punitive actions to correct the issues.

Shiller said punishment is ultimately to the student’s detriment.

Chris Emdin, an associate professor at the Teachers College in Columbia University, will be the keynote speaker of the day-long event.

The event will also include a welcome from Dean of the College of Education, Laurie Mullen, and Towson University President Kim Schatzel.

Emdin will be speaking about his research on “hip-hop pedagogies” and how to engage young people of color in the classroom. His speech will be followed by a talk from project manager of Associated Black Charities Adar Ayira on implicit biases and institutional inculcation.

Despite federal funding cuts for art over the last couple decades, Shiller said she would like to see more “arts-infused education” to help students connect with classroom topics through artistic expression.

“Any teacher – a teacher of math, a teacher of science – could actually use the arts to teach and assess their students, and that’s really the idea in why we wanted to showcase art,” she said. “It’s just one of the most powerful ways you can see the beauty and the humanity in young people.”

“Doing that allows students to express what it is that they know using non-traditional formats,” Shiller said. “They’re doing science, they’re doing the work of the scientific method, they’re doing labs, they’re engaging in science in their communities.”

Whether in a science class or another course, Shiller encourages schools to look for ways to create more engaging learning environments.

“A relevant science curriculum would look like students out there in the world doing experiments to find out what the results are of pollution in their neighborhood, for instance,” she said. “Testing the air quality, water quality, that sort of thing. But the way they present their results could be using the arts.”

Local educators will lead breakout sessions regarding questions about how to promote equity in the education system.

The gathering will also include a networking lunch, and will allow time for participants to visit with gallery participants such as Wide Angle Youth Media, Young Audiences, Arts Every Day and DewMore.

Before a closing panel led by Shiller, members from the Step Team of The Baltimore Leadership School for Young Women will perform a dance routine.

Shiller hopes educators will come away from the event being committed to addressing their own implicit biases to better serve their students.

“It’s not something like ‘I read an article on implicit bias and now I’m okay,’” she said. “It really requires a lot of deep reflection and work and mistake-making and constant going back and reflecting and looking at how that plays out…. It’s a constant process and something that the whole school needs to engage in to improve.”