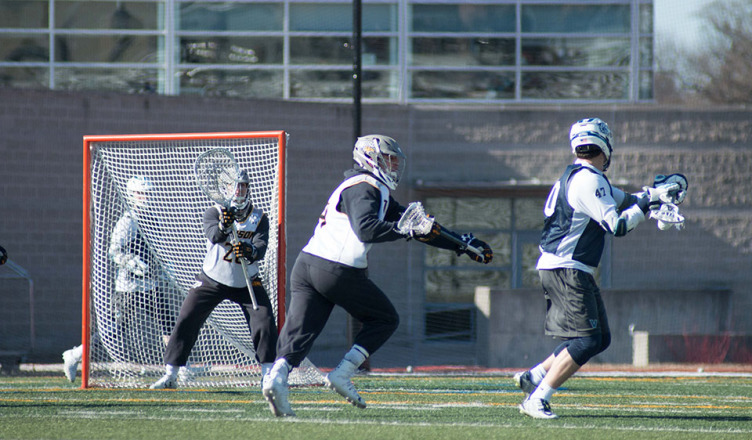 No. 17 Towson took down No. 6 Johns Hopkins with a 13-8 victory at Johnny Unitas Stadium Saturday afternoon.

Towson then missed several shots from the distance and failed to extend its lead. Johns Hopkins later tied the game 1-1 with a goal from midfielder John Crawley.

Later in the first quarter, Towson senior midfielder Tyler Young drove from outside the box down the middle before blasting a low shot into the net.

However, Johns Hopkins managed to tie the game in the final minute by capitalizing on a turnover in the midfield by Towson.

Crawley gave the Blue Jays their first lead of the game just under a minute into the second quarter, shooting into the upper 90 just under the crossbar.

Woodall then scored a goal of his own with an unassisted effort off the faceoff after Patrick Fraser had given Johns Hopkins the lead just six seconds before.

The Tigers attack began to find more space in the Blue Jays’ defense with quick passing and constant pressure in the box. Mike Lynch scored from the edge of the box before Brian Bolewicki hit the post after taking a narrow angle shot.

Towson continued to find space at the edge of the area, when midfielder Jon Mazza unleashed a shot from the area after senior attacker Ryan Drenner found him from behind the net.

Mazza’s goal was the last of the first half, and the Tigers took a 6-4 lead going into the break.

The Tigers kept their scoring streak going in the second half as Young scored his second of the game with an unassisted low drive just under a minute into the third quarter.

After a Hopkins goal from midfielder Cody Radziewicz, Towson extended its lead to three after Hopkins failed to capitalize on a long possession. Seider again wound up from the edge of the box and snuck one past Blue Jays goalie Brock Turnbaugh.

Marr then quickly retaliated for Hopkins, beating Towson stopper Miller at his near post to keep the team within two.

Miller then stepped up and made two saves on Crawley to maintain the lead for the Tigers.

Drenner then extended the lead for Towson by starting from behind the net, evading Hopkins defenders and ripping a low drive into the back of the net. Drenner’s effort was the final goal of the third as the Tiger’s took a 9-6 lead going into the final quarter.

Seider then added a crucial fourth goal for the Tigers with an unassisted shot that bounced between Turnbaugh’s legs and went into the back of the net.

Joel Tinney then pulled Hopkins within three, but Woodall quickly restored Towson’s four-goal lead after winning the faceoff and darting into the box before scoring high.

Drenner then effectively sealed the win with a hard angle shot that went past Turnbaugh’s mesh and into the upper 90. Crawley tried to spark a Hopkins comeback by completing his hat trick with a weaving unassisted goal that made it 12-8 with seven to play.

“One we get the ball we want to push it and be aggressive as much as we can but also be smart with the ball.” Head Coach Shawn Nadelen said. “We wanted to make them defense us and our guys did a good job of doing that.”

The Tigers continued to make quick passes on offense to frustrate the Blue Jays defense. Drenner concluded the scoring with his third of the day after the Blue Jays over-extended on their defensive pressure.