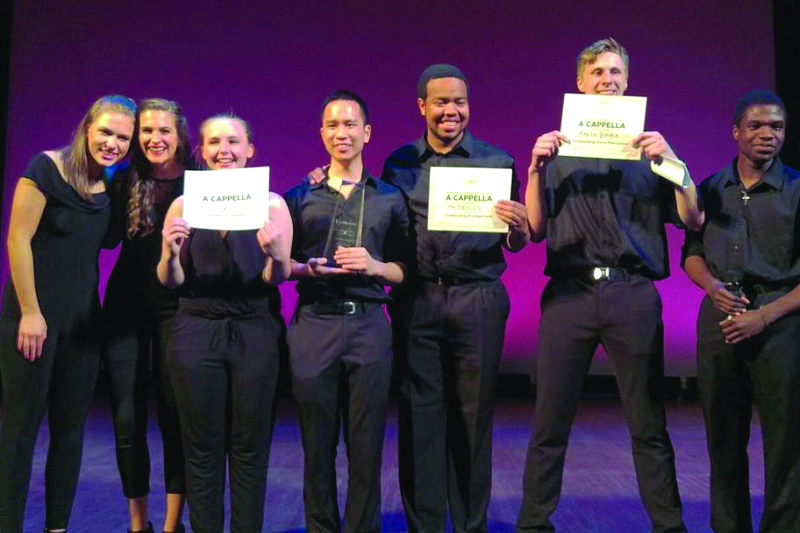 Imagine trying something for the very first time and being good enough at it to earn a top ranking in its field. Sound impossible? For one student-organized a cappella group, this scenario is a reality.

After scoring winning spots in the 2017 International Championship of Collegiate A Cappella (ICCA) quarter and semi-finals, the Towson Trills will be competing in the ICCA finals in New York City April 22. They are the first a capella group from Towson University, and the smallest a capella group in the history of the ICCA competition, to make it to the finals.

Despite the group’s quick road to success, the Towson Trills began as just a group of friends having fun while expressing themselves through music.

“The Trills is really a weird freak accident,” Towson Trills manager and vocal percussionist Aaron Bayne said. “The Trills sort of just came together the first week of freshman year. That Saturday, we moved in, and by Tuesday, we were having practice.

“I never even thought about joining an a cappella group coming to college,” Damanka said. “I’m a shower singer, I like music. But joining has been life changing. It’s helped me build my confidence and has helped me appreciate music a lot more.”

This year marks the first time the Trills have competed in the ICCA competition. Their smaller-than-average group size and lack of exposure in the a cappella community initially made them the underdogs, but their performances and YouTube channel have helped boost their reputation.

“People are now looking for us more,” Reichert said. “Our name is definitely being said a lot in the a cappella world.”

The Towson Trills have already won ICCA awards for Outstanding Vocal Percussion and Outstanding Arrangement, an award that was given to all three songs performed by the group during the most recent round of the competition. They described their process for creating their sets as “a unified agreement.” The members pick a song and agree on the soloists before Hyson begins to piece everything together.

“Our musical director, Leroy Hyson, he’s kind of a musical freak,” Bayne said.  “There’s no other way to put it. Once we pick our soloists, Leroy figures out the chord structure in his head and the ideas just flow. It builds on the spot.”

Hyson’s ability to put a new spin on the songs performed by the Trills has been one of the things that make the group so memorable.

“We try to make our covers different than the actual song,” Lim said.  “We try to add our own flair to it and that’s my favorite part. Leroy is really good at coming up with creative things like that.”

The ICCA competition has brought along some great memories for the group, their favorite being their encore performance at the semi-final round, in which their families and friends joined them as they sang in celebration.  The hardest parts of the competition have revolved around two things: scheduling and funding.

“Everybody is so involved in so many different aspects which is awesome, but it also is a little bit of a hindrance with scheduling,” Reichert said. “And we definitely have trouble with the funding aspect, because there’s so much to pay for. We have to find funds for the competition, while getting our set together and rehearsing, while making sure our grades stay afloat. It’s just a lot of stuff to do.”

“Towson should fund us,” Bayne said.  “If a sports team made it this far, they’d be shelling out thousands of dollars on the spot. Immediately, Towson’s now known for music, and not just education or sports. It’s known as a music school now, internationally, and that’s partially because of this competition.”

According to the Trills, they’ve met with University administration and were told that TU would try to make accommodations.

Despite the stress, the Trills are looking forward to the final step in the competition.

“I think just performing at the venue that we are, the Beacon Theatre, is amazing,” Lim said. “It’s a legendary theater, it’s on Broadway, and some of our favorite singers have performed there. Mariah Carey does her Christmas shows there, so I’m freaking out that we’re going to be singing in the same place Mariah Carey does.”

Winning in the ICCA finals would render the a capella group speechless, members agreed.

“I don’t think I’d be able to process it honestly,” Damanka said.  “It’s like a dream come true. I watched ‘Pitch Perfect’ freshman year and thought it was cool, but I never actually thought about it as reality, and it’s actually reality right now, which is crazy to me.”