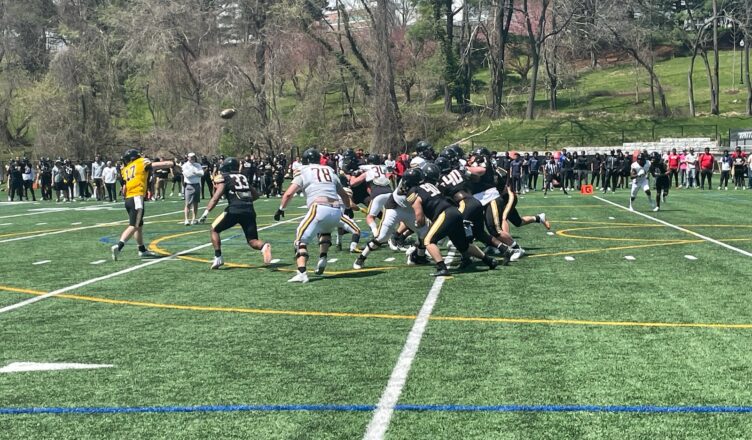 The Towson University football team held an open scrimmage in the Lower Fields Complex next to Johnny Unitas Stadium. Instead of a traditional scrimmage, the offense and defense competed against each other in several situations.

Head Coach Rob Ambrose said it was because the Tigers did not have enough healthy offensive linemen to field two separate teams.

“We got a greater understanding on a ton of guys,” Ambrose said. “We were so old for so long, so many guys got reps, all of them got reps. Great evaluation, I know we got better schematically defensively big time.”

With Chris Ferguson graduating last year, the starting quarterback has yet to be determined. There are six quarterbacks on Towson’s roster; however, two have caught Ambrose’s attention. He said that redshirt freshman Scott Smith III and graduate Tyler Johnston III have been impressive this spring.

“I saw great strides. What I didn’t see a year ago were strides,” Ambrose said. “… I thought everyone was just running around in mud, chewing the same dirt which is really, really frustrating. But watching these guys grow from the fall to the beginning of spring, from the beginning of spring to the middle of spring and to the end, I actually saw legitimate growth at that position.”

Of the ten wide receivers on the Tigers roster, half of them are underclassmen. One of the standouts according to Ambrose has been freshman Isaiah Perkins. Perkins was a three-star recruit from St. Vincent Pallotti High in Laurel. He chose Towson over several FBS offers including Maryland, Buffalo, and Liberty among others.

“It’s hard mentally and physically to do what we do and he stepped in,” Ambrose said. “I’m not gonna say he did it without missing a beat, but he did it better than any freshman wideout I’ve seen do it in a long time. He’s strong, smart, and he catches the ball with his hands consistently. Unless something crazy happens, I freely expect him to get on the field this summer.”

The Tigers open the 2022 season on the road in Lewisburg, Pennsylvania against the Bucknell University Bison on Saturday, Sept. 3.

Towson has 11 games scheduled for the 2022 season. Their home opener is Saturday, Sept. 10 against Morgan State University. The following week, the Tigers will head to Morgantown, West Virginia to face the West Virginia University Mountaineers for the first time since 2014. Towson will have four CAA home games with the regular-season finale against CAA newcomer Hampton University on Saturday, Nov. 19.

“I expect we’re gonna show up and we’re gonna beat people’s butts, that we’re gonna play Towson football, represent the university in the right way and have a heck of a time,” Ambrose said.