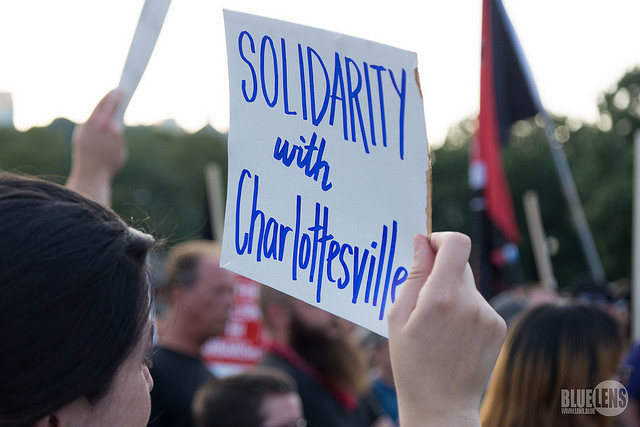 What began as a white nationalist protest against the removal of Confederate statues in Charlottesville quickly devolved into violent riots led by groups of white nationalists against hundreds of counter-protesters.

The violence culminated in the death of 32-year-old Heather Heyer, who was killed when a car plowed into a group of counter-protesters in what appears to be an act of domestic terrorism.

The accused driver, 20-year-old James Alex Fields Jr., has been charged with second-degree murder, three counts of malicious wounding and one count of hit and run attended failure to stop with injury, according to Charlottesville authorities.

Nineteen other people were injured in the crash. According to one of his former high school teachers, Fields was a Nazi sympathizer who held white supremacist views.

Mileo announced five actions he and the SGA will be taking to combat hate at Towson and the surrounding community:

Associate Vice President of Student Affairs and Diversity Santiago Solis said in an email that diversity and inclusion training is currently mandatory for orientation leaders, resident assistants, Greek diversity chairs, and many student staff. Solis said that he and Mileo “are currently discussing ways to continue collaborating on these important issues.”

“The CSD’s new Associate Director for Cultural Competency Education Brian Jara has been working with various departments to coordinate trainings and workshops on cultural competency as well as racism/anti-racism and their intersection with other forms of oppression,” Solis said.

Schatzel also condemned the weekend’s “acts of great violence and terror” in Charlottesville and on the University of Virginia campus in an email statement made Sunday.

Schatzel shared her condolences and prayers for “all those affected by this reprehensible violence” and reaffirmed the University’s commitment to the “relentless pursuit of a diverse, inclusive and welcoming campus for every member of the Towson University community.”

“As a university community, we remain resolute together and condemn any and all forms of hatred, racism, bigotry or supremacist ideology that seek to hurt, terrorize, bully or marginalize any members of our community,” she wrote. “As hallmarks of our democracy, the U.S. Constitution protects and guarantees our rights to free speech and assembly; however, no one should ever feel threatened for their safety or well-being as a result of such expression.”

Present in Charlottesville over the weekend was white nationalist Matthew Heimbach, a Towson alum who was responsible for founding the unaffiliated “White Student Union” organization at Towson in 2012. Heimbach is listed on the Southern Poverty Law Center’s “Extremist Files.”

Heimbach leads the Traditionalist Workers Party, a far-right group that is “intimately allied with neo-Nazi and other hardline racist organizations that espouse unvarnished white supremacist views,” according to SPLC. Speaking to reporters Monday, Heimbach claimed that the white nationalists were defending themselves over the weekend, and blamed the counter-protesters for the violence.

Two injured counter-protesters filed a civil suit against Heimbach and several other alt-right organizers of the Unite the Right rally. The Towerlight will update this with more details as they become available.

Mileo, who pledged to dedicate himself to equity and justice for marginalized communities, said in his statement that “acts of terror have no place on [Towson’s] campus.”

“No student, faculty, staff or administrator that supports this type of hate is welcome on our campus,” Mileo said. “We will refuse to represent the hate and bigotry.”

The weekend’s violence began Friday night, as a group of white nationalists– including neo-Nazis and Ku Klux Klan members — marched on the University of Virginia campus, brandishing torches, spouting hateful epithets and displaying signs like the Nazi salute.

Counter-protesters, many of whom were UVA students, stood against them as the situation escalated into violence. It took several minutes for the police to intervene, according to the Washington Post.

The violence continued on Saturday, prior to a scheduled “Unite The Right” rally. Members of both white nationalist groups and anti-fascist groups gathered, and tensions continued to rise until a group of white nationalists charged a line of counter-protesters.  Police dispersed the crowds before the rally even began, as it was declared an unlawful assembly, according to the Washington Post.

The groups made their way to the street, where white nationalists yelled anti-Semitic, racist and homophobic phrases, bore Nazi flags and held white supremacist images, and where various fights broke out, broken up from within the crowd, according to CNN.

The chaos and violence went on “with little apparent police interference,” according to the Washington Post, before the car plowed into the counter-protesters, killing Heyer and injuring 19 others.

Filipino Cultural Association Vice President Julie Jimenez, who attended the Charlottesville counter-protests, said she and her boyfriend were no more than 10 feet away from the car that plowed into the crowds that day.

“Initially, we heard a loud bang and everyone was screaming,” Jimenez said. “At first, I thought it might have been a gunshot, but then I saw those two cars moving forward and pushing people back. I immediately pulled my boyfriend back and we ran away from the scene to try and get away from the panic. I myself was panicking because I’ve never been more terrified in my life. After I calmed down, my boyfriend and I went back to the scene to and try to offer any help we could provide.”

Jimenez was pleased with Mileo’s statement, and was particularly happy about the relaunch of the #NotAtTU campaign, which she said “has done a great job of dealing with hate and bias incidents.”

“He has an actual plan to fight against hate and bigotry on this campus,” Jimenez said.

“I think that’s what was lacking in President Schatzel’s statement,” Jimenez said. “She doesn’t necessarily state a concrete plan to prevent racial injustice from being on campus.”

Joshua White, president of the Black Student Union, said in an email to The Towerlight that while he commends both Mileo and Schatzel for their direct approach in calling out the groups responsible in Charlottesville, he is “not moved, reassured or appeased by mere words.”

White said that the University community must prepare itself to make the distinction between freedom of speech and hate speech if “we truly hope to create a diverse, inclusive and welcoming campus that we all strive for.”

“‘Enough,’ in my opinion, can never be done,” White said. “Strides will always need to be made, stances taken, work to be done — that, unfortunately, is the reality we live in, and each step creates the campus environment and community that we all can be proud of.”

To White and members of the BSU executive board and general body, allies should be consistently committed to showing up and supporting marginalized people through concrete actions.

“We need allies who are willing to do more than wear a Black Lives Matter T-shirt thinking that is going to change things,” said Regina Cain, BSU VOICES Poetry Slam Team president. “We need allies in government who can help erase or rewrite laws that leave our communities at a disadvantage. We need allies in the form of prosecutors who will bring justice to police officers that murder while on duty.”

Ryan Kirby, president of the College Democrats of Towson, said that all Americans—Democrats and Republicans alike—need to recognize that racism and other forms of hate still exist today, and that everyone needs to “stand up for what is right, like Heather Heyer did, by protesting and actively fighting back against racism, hatred, and bigotry wherever it occurs.”

“Combating hatred is not something that is exclusively for any one political ideology,” Kirby said. “All Americans should be fighting for each individual to be treated equally in every facet of life.”

Matthew Schwartzman, president of the Towson College Republicans, said that as a Jewish man he was comforted by Schatzel and Mileo’s statements, and he particularly commended Mileo’s planned implementation of diversity and inclusion training.

“For Republicans and Democrats alike, I firmly believe that it is crucial for incidents like these to serve as a bridge that closes the gap in a difference in ideology, rather than act as an earthquake that shakes that very divide at its core,” Schwartzman said. “However, the fight to end racism mustn’t be secluded to only Republicans and Democrats. All Americans ought to stand up and fight to preserve this nation’s principle that all individuals are created equal.”

Although Towson Hillel Assistant Director Scott Black recognized the need to for vigilance in facing the type of anti-Semitic language and images used by the white supremacists in Charlottesville, he said TU continues to be safe for Jewish members of the Towson community.

“Towson University has long been known as a safe and welcoming campus for Jewish students, faculty and staff, and the response over the past week has reinforced that well-deserved reputation,” Black said in an email. “Tolerance and respect are core values here at Towson University. Though we join the rest of our campus family in remaining vigilant in the fight against racism, anti-Semitism, bigotry and hatred, we are confident that both our returning students and those joining Towson University for the first time will quickly come to understand what a special place this is.”

Editors note: This story has been edited for clarity and structure.
Featured image courtesy of Mark Dixon.

Previous post A statement from The Towerlight’s editorial board 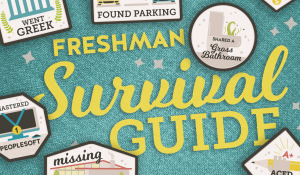