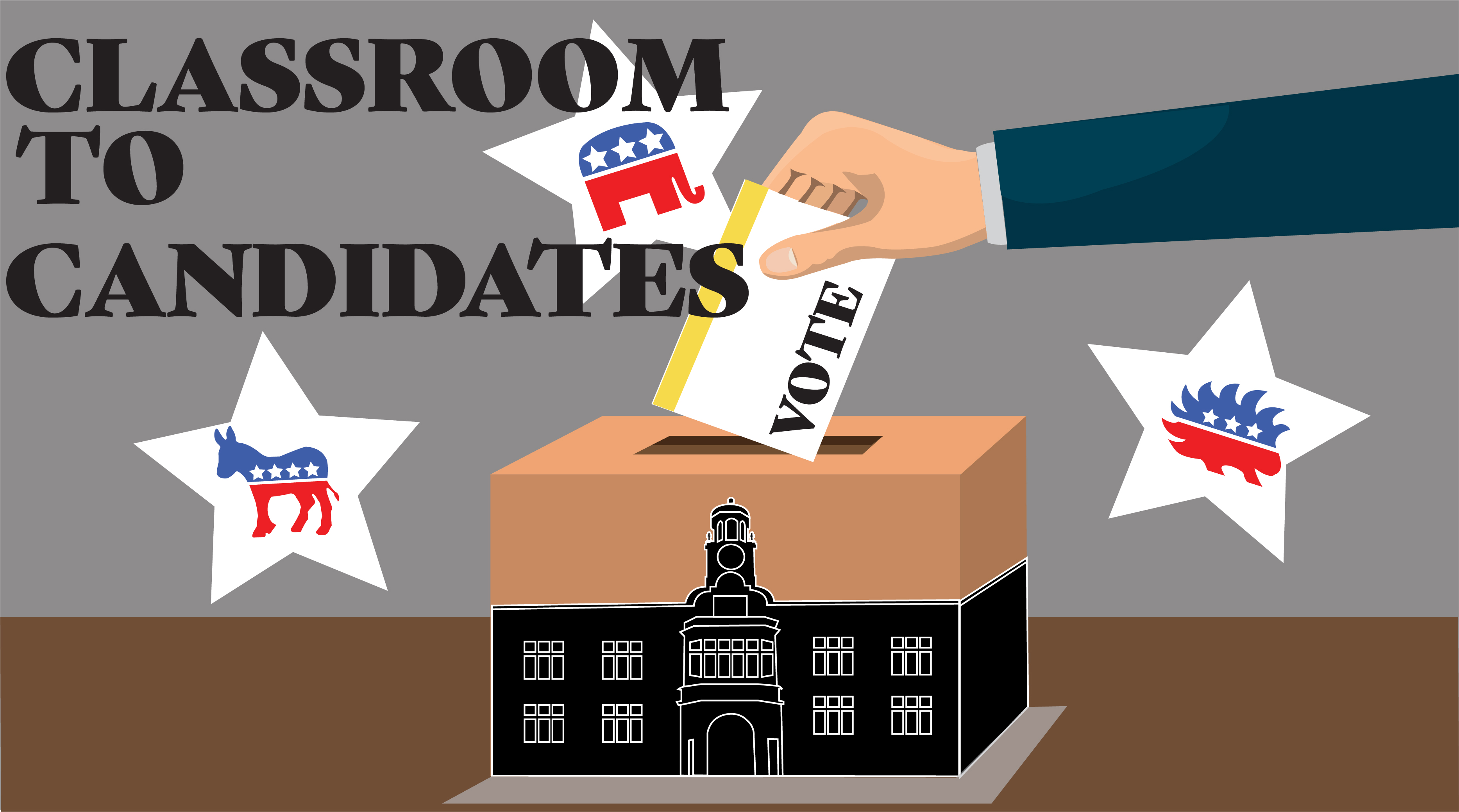 Several Towson University students and faculty members are running for Baltimore County Council, the House of Representatives, and the United States Senate. They look to lean on how their roles at Towson have impacted their decisions to pursue political careers.

Tenured foreign languages professor Democrat Colleen Ebacher thought it was crazy when people told her she should run for Baltimore County Council District 3, but she said her work as an educator should help her in her political pursuits.

“I work with students to express themselves, to think deeply, and to solve problems and be prepared for the future,” Ebacher said. “That’s my job. And that’s really what a politician needs to do as well…. That seems like a natural fit for the work I would do on the council.”

District 3 is currently held by Republican Wade Kach, who has held various political offices in Maryland for the past 43 years.

Ebacher said she had reservations about running initially, but made her choice to run after a conversation with one of her twin daughters.

Ebacher stressed the idea of being an engaged citizen and reflects that thinking in her classroom. Her students recently completed 15 hours of community service helping ESOL students at Dumbarton Middle School and recently hosted “Be a Towson Tiger Day,” in which 40 of those middle-schoolers visited Towson University for a day.

Ebacher has been engaged in the immigrant community as well. She said that community reached out to her to travel to Reading, Pennsylvania, in order to encourage Hispanics in low-income areas to vote.

After Ebacher helped Spanish-speaking citizens register to vote for several months, she decided to help the “get out the vote” effort. She looked to inform citizens who may have several jobs or may not speak English on how to vote in the election.

Ebacher then canvassed for Hillary Clinton in 2016 after the primary election in Reading. After Clinton lost the election, Ebacher became involved with the local “Indivisible” organizations.

“Indivisible is a really grassroots organization,” she said. “So, after the 2016 election, a number of people who had worked on the Hillary Clinton campaign said, ‘let’s write a manual to help people organize at the grassroots level.”

Ebacher went on to lobby against the 287(g) bill, a bill that aligns local law enforcement with U.S. Immigration and Customs Enforcement (ICE). She argued that the bill negatively affects local communities.

“Local law enforcement will hold undocumented immigrants who have an infraction such as driving drunk, or having a tail-light out, or jaywalking,” she said. “They come into the local jail system, it might be a fine, it might be three days in jail and then ICE asks the local law enforcement to hold them until ICE can get there and put them into deportation proceedings. And so, that is, for many reasons, completely illegal and harmful to the local community.”

After helping lobby against this bill to local council in small group meetings, Ebacher said she realized that “they were misinformed, uninformed, really did not know the potential impact of this bill.”

Ebacher said she is comfortable stepping into the role of being a politician.

“I would say that my activity as a professor prepares me to be a politician who works with people and for people.”

Another person at Towson running for office is 32-year-old Michael Carney. Carney, a junior at Towson University studying history, said he sees himself as “a man of many interests” and is running for the House of Representatives to represent Maryland Congressional District 2.

Carney, a Libertarian, originally considered running for Senate, but opted to pursue a position where he could work closer with locals.

“I’m going to work to make sure the people in the community have more opportunity to live a life that’s better for them – less reliant on entities, even the government itself that doesn’t always have their best interest in heart,” Carney said.

He was previously in the military, where he learned many leadership skills and took charge in standing up for the people around him.

“There’d be a few times where we had classes and none of the leadership would be there, so I’d take the initiative,” Carney said. “And of course, I’d get in trouble for it, because I’m not, at the rank I was in, not supposed to be doing that, but at the same time they’d say, ‘alright, you have to be in trouble, but you still did the right thing.’”

Carney has been involved in his community, from customer service work to his involvement in the military and living in different states. He said he looks to use those experiences to properly represent the concerns of the community.

“It has given me a lot of experience in dealing with politicians and the political process,” Carney said. “They’ve also been very helpful in sharing advice on how to run and campaign, not to mention a behind-the-scenes look at how they deal with people.”

He also works with State Senator Will Smith and Delegate Pat Young, who was the former director of veterans services at Towson University.

Carney said he feels like he has a wealth of knowledge just from being at Towson and going through the process of running for office.

“I’ve been making connections,” he said. “I’ve learned so much here – my major, the other classes outside my major [economics, policy, geography, politics], the programs – I’ve been a member of Toastmasters, the political debates on campus. They’ve been invaluable.”

If he is not elected for District 2 House of Representatives, Carney hopes to go into analysis work, but as he runs he said he hopes to make a positive impact.

Political science professor Tony Campbell is also running for office this election season, looking to land a spot in the U.S. Senate as a Republican candidate.

Campbell’s campaign focuses on equal citizenship which for him means equality of opportunity rather than equality of outcome.

“I think one of the things we have not done well in the last 30 years or so is the growth of identity politics,” Campbell said. “It’s kind of a win-lose equation where if your group happens to be more active and more motivated and better funded, then your group wins and better people lose. So one of the things I think we’ve lost is the idea of an American community.”

Campbell decided he wanted to run for office about 20 years ago, and it isn’t his first time running for a government position. Four years ago, he ran for Baltimore County Executive, but lost the primary by 18 votes.

He also found his initial inspiration from his mother, who he said did a lot of advocacy work when he was a kid.

“Both my parents were preachers, so she was definitely kind of right of center as far as stuff is concerned,” Campbell said. “She was advocating and lobbying and stuff like that probably when I was in fifth or sixth grade, so anytime she basically yells at me for doing this again I can say ‘well, I got it from you.’”

Campbell also stressed the importance of voting. He hopes that in the upcoming election, students will exercise their right to vote because, he admitted, sometimes “adults make decisions that are poor.”

He argued that the DNC stacked the deck in favor of Hillary Clinton, but that dissuaded a lot of young people from voting because they primarily supported Bernie Sanders.

“When the dust settles I expect to be the Republican nominee, and there’s ten other people in my primary so you never know, but I am working hard to be the nominee,” he said. “There’s some things we’re not going to agree on, but I come at things with an understanding of individual liberty but balanced with the fact that your choices doesn’t mean I have to pay for them.”