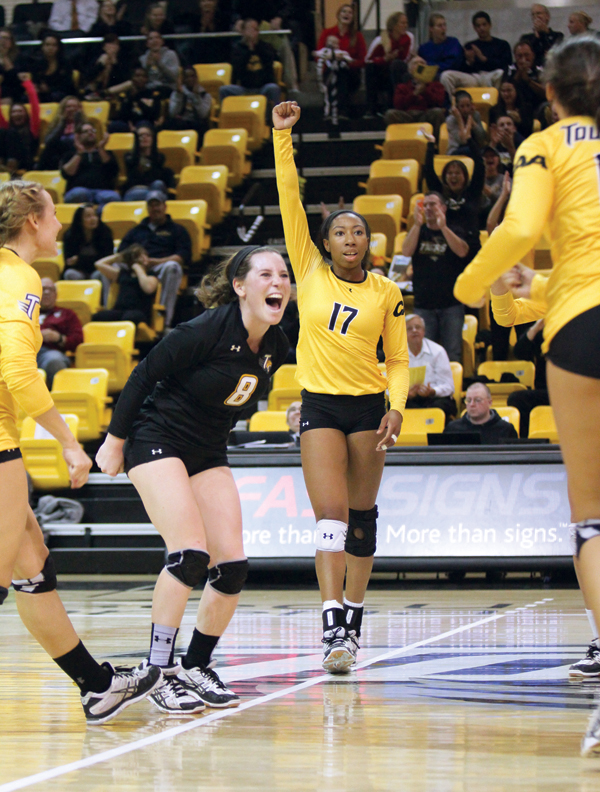 In the first set, there were 13 ties and four lead changes resulting in a 31-29 score in favor of the Blue Hens. This was the longest the Tigers have had to battle in a set this season.

“We knew we were going to be in for a battle for most of the night,” Head Coach Don Metil said. “All the games prior to this one were on the road in order to help us adapt to the environment [of away games].”

Three straight kills from redshirt senior middle blocker Candace Steadman helped the Tigers lead the second set 18-12. Later in the set, freshman outside hitter Annie Ertz extended the lead to 22-17. Despite a 5-2 run by the Blue Hens, Steadman delivered a kill to win the set 25-22 and tie the match 1-1.

A 7-0 start in the third set gave the Tigers a strong lead, but the Blue Hens continued to fight and came back to draw within one point.

Senior middle blocker Lindsay Flaherty contributed two kills to a 4-0 run for the Tigers making it 16-11. The Tigers went on to win the set 25-23.

In the final set of the match, the Tigers started off strong by going on an early 6-0 run. Back-to-back kills by sophomore rightside hitter Jocelyn Kuilan extended the Tigers’ lead to 10-2.

The game ended on a service error by the Blue Hens that gave the Tigers a 25-17 win.

Senior outside hitter Jessica Lewis finished the match with 25 kills. This is her single game season-high in kills.

“Jess played really well,” Metil said. “We’re going to keep on counting on her to have big nights like these for the conference games.”

The Tigers earned another 3-1 victory in their home opener against the Virginia Commonwealth Tuesday at SECU Arena.

“This team is very young right now,” Metil said. “There are some leaders out there, but we never know how things are going to go. We were responding to a little bit of adversity as well. For us to survive against VCU in an offensive system that we don’t normally use was nice to see.”

The Rams found themselves in a rut, producing four straight attack errors which resulted in a score of 22-14 in favor of the Tigers in the first set. A kill by Carola Biver ended the set 25-17.

In the third set, 15 ties and seven lead changes occurred, which resulted in a 28-26 loss for the Tigers.

However, a 12-6 run by the Tigers led to a 19-14 lead against the Rams in the final set of the night. A block from Kulian and Flaherty ended the set with a 25-17 win for the Tigers.

Towson will return home to take on the College of Charleston in its next match Friday at SECU Arena. The match is scheduled for 7 p.m.

“The CAA is a league where you need to show up and play every day,” Metil said. “It’ll be a challenge playing Charleston but we’ll just have to improve as a unit, take care of the ball and let the rest play out.”