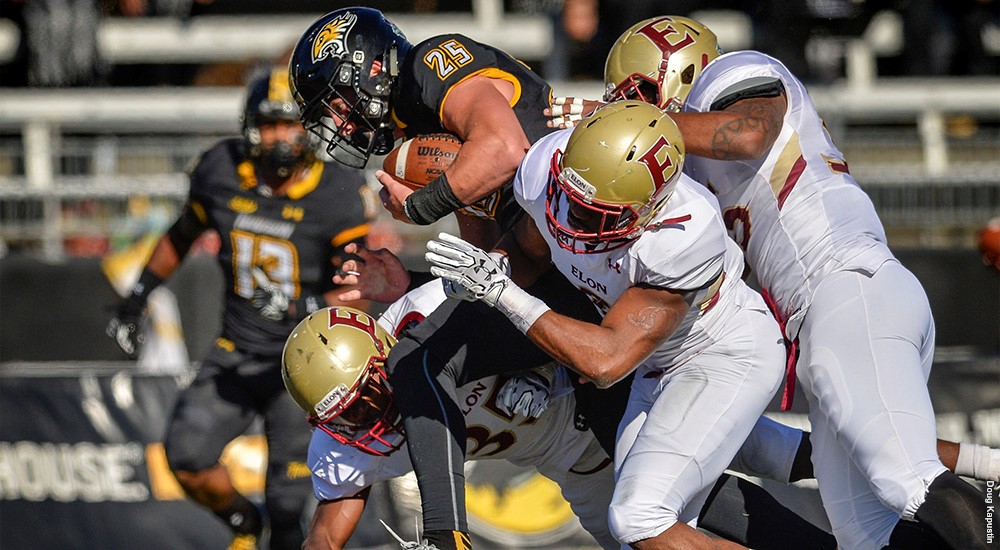 After dropping their last two games, the No. 20 Tigers take their final road trip of the season to face No. 5 Elon. The Tigers are coming off a 35-28 loss to Maine at Johnny Unitas Stadium. Meanwhile, Elon beat Rhode Island 24-21, including a 21-0 scoring run in the second quarter. The 6-2 Phoenix look for a third straight victory while the Tigers look to bounce back. Elon is a run first offense, and their running backs look to be key factors on Saturday. They also have some key defenders who will attempt to prevent redshirt junior running back Shane Simpson from reaching the end zone, which he has done in each game this season. If Towson can scheme against these four players, the Tigers have a strong chance of upsetting the Phoenix.

In five games this season, freshman running back Jaylen Thomas has rushed for 585 yards and four touchdowns. He was a major contributor in Elon’s last two games, rushing for 150 and 222 yards respectively. The Carrollton, Georgia native has rushed for 75 yards in four of his five games and has scored in each of the last four. Towson has an elite rush defense in the Colonial Athletic Association (CAA), giving up just 3.4 yards a rush. The Tigers denied Stony Brook’s running backs in their matchup earlier this season, and will have to do the same against Thomas in order to earn their seventh win.

Every backfield needs a second back to take some of the carries, and Elon has that back in junior running back De’Sean McNair. Last week against Rhode Island, McNair had 12 rushes for 61 yards and a touchdown including his season long 30 yard gain. In eight games, he has scored six touchdowns, posting one in three of the last four games. His yardage is inconsistent, however has rushed ten or more times in five games and the three where he did not got the ball at least seven times. He does not have great receiving numbers, and Elon has struggled in the passing game all season. Sophomore quarterback Jalen Greene has just 377 yards and two touchdowns this season. He had 35 yards last week, completing only 37 percent of his passes. The lack of a passing game allows the Tigers to pin their ears back to stuff runs.

This team is built on defense, and senior linebacker Warren Messer is an impactful player on that side of the ball. In eight games for Elon he has 69 tackles, 9.5 of which went for a loss. Last week against Rhode Island, he recorded 14 tackles and 2.5 for a loss. He also contributed two sacks and caught his first interception of the season, which he returned 86 yards for a touchdown. He has three games with double digit tackles and two with at least nine tackles. He has recorded a tackle for loss in three of his last four games, including four in against James Madison. Redshirt junior quarterback Tom Flacco is mobile, however Messer’s ability to spy allows him to keep Flacco in the pocket.

The Phoenix also have a potential game changing playmaker in the secondary. Junior defensive back Daniel Reid-Bennett has 47 tackles in eight games. Last week, he recorded seven tackles in the win against Rhode Island. This season, he has forced two fumbles and recovered one. He also has an interception and six pass breakups. He was third on the team in tackles against Rhode Island and is second on the team overall this year. He has been a bright spot for a secondary, which has struggled in defending the pass. Elon is currently tenth in the CAA in pass defense, allowing 247 yards per game. They allowed 349 yards through the air against Rhode Island and gave up 190 yards to one receiver. Last week, no Towson receivers eclipsed 100 yards receiving, and this week will be difficult to do so against one of the top defensive backs in the conference.