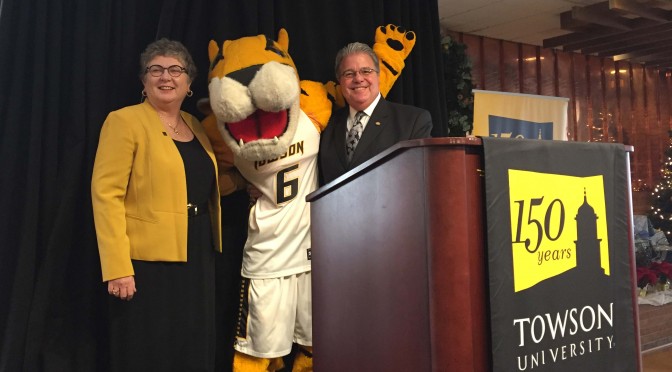 Incoming Towson University President Kim Schatzel praised the University’s past and expressed her excitement for its future, during an on-campus welcome reception in the University Union’s Potomac Lounge Dec. 10.

“There’s a lot to be proud of at Towson University, and there are great things ahead,” Schatzel said.

The University System of Maryland announced Schatzel’s appointment Dec. 4. She is scheduled to assume the role effective Jan. 25. According to USM Chancellor Bob Caret, Schatzel was selected for the position due to her experience in both the academic and business spheres.

According to the USM announcement, Schatzel has 20 years of business experience from working for a multinational and industrial firm as the founding president, chief operating officer and chief executive officer.

Schatzel is currently the interim president, provost and executive vice president of academic and student affairs at Eastern Michigan University.

“She’s capable of multitasking,” Caret said. “And we like that. Anybody who can do the job, or two or three at once, is somebody worth looking at.”

During the reception, Schatzel asked the audience to consider what they can do to get Towson to its next stage and talked about creating a place for local and community businesses to access Towson and form partnerships.

In a meeting with the press following the reception, Schatzel responded to questions about the document of 13 demands from concerned black students that Interim President Timothy Chandler signed in November.

She said she has a great deal of respect for the discussion held between the student activists and the University administration on Nov. 18 and described it as “thoughtful and comprehensive.”

Schatzel said she is confident in the decision that Chandler made and looks forward to supporting the agreement. She plans to meet with the students involved in the #BlackOutTowson movement early on in her presidency.

Chandler will return to his previous position as University Provost. During the reception, Caret said that Chandler was one of the finalists for the position, and did a outstanding job keeping the momentum on campus going during the 15 month transition period between Presidents.

Chandler received a standing ovation from the crowd for his work as interim president.

Schatzel said that upon her appointment she hopes to meet as many people on campus and in the Towson community as possible. Because she feels the location of the Administration Building is not central enough to campus, she plans to dine in the campus dining halls once a week, a practice she already implements at EMU.

Schatzel said that she and husband Trevor “mystery shopped” the Towson campus during the interview process. They had coffee at Paws, attended a football game, talked to students and faculty, and explored the campus and its facilities.

“What we really felt as we talked to all the people as we walked around campus, was the absolute clarity that this was a special place,” Schatzel said.