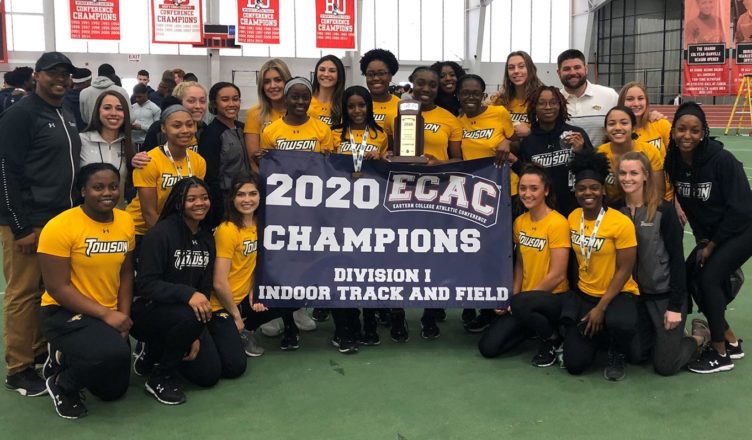 UConn placed second with 59.75 points while UAlbany finished third with 58 points out of 41 teams. Towson ranked fifth after the first day of competition.

“I would say hysteria,” head coach Mike Jackson said. “It wasn’t a meet where we put a lot of points up early and then there were other events that we did not compete in so we had to wait and see how the other teams did so it was certainly a dramatic finish and we’re just glad that we were able to come out on top.”

“We were very excited for Crystal and all the 60-meter runners,” Jackson said. “Last year, Crystal was third and I felt like she wasn’t going to lose ever again, but her teammates Christina Riggins and Shamika Burton did a great job. We were really hoping to go one, two, three, but it’s pretty tough at that level to do so, but they definitely stood out and left their mark on the meet.”

Johnson, Riggins and sophomore Shamika Burton qualified for the 60-meter dash finals on Saturday. Riggins finished the semi-finals with a personal-record time of 7.56 while Johnson timed 7.58. Burton timed 7.61.

Senior Helnsarah Penda finished fifth in the 60-meter hurdles finals timing 8.70 on Sunday. She qualified in the semi-finals on Saturday after taking third and timing 8.58.

Senior Michella Obijiaku set a new meet and school record while also breaking the Italian national record in the weight throw with a toss of 20.66m on Saturday. Obijiaku was named the Women’s Performer of the Meet.

“It was great because she’s a senior and it’s her last indoor meet so being able to end on a high note like that at a meet of that level was very special,” Jackson said. “She had a meet record and school record in the weight throw and then to be honored by the ECAC to be the Performer of the Meet was special.”

Junior Elisia Lancaster finished second in the weight throw with a toss of 19.67m while sophomore Georgia Coleman placed sixth with a throw of 18.20m.

Sophomore Hayley Horvath finished second in the pole vault with a clearance of 4.10m on Saturday.

Sophomore Ani Boghossian-James finished fifth in the pentathlon on Friday scoring 3,349 which is fourth all-time. Freshman Christina Marion placed 11th with a score of 3,036 which is seventh all time.

“Their best performances to date,” Jackson said. “Both personal bests which is what we plan on doing when we go to championship meets… so it was a great start and definitely helped us to win the championship.”

“She’s a milestone for our program and extremely historic, but the hardest part was getting in,” Jackson said. “Now we want to go win a championship, so the goal is for Lauren to go out there and shock the world and I’m confident that she can do that.”