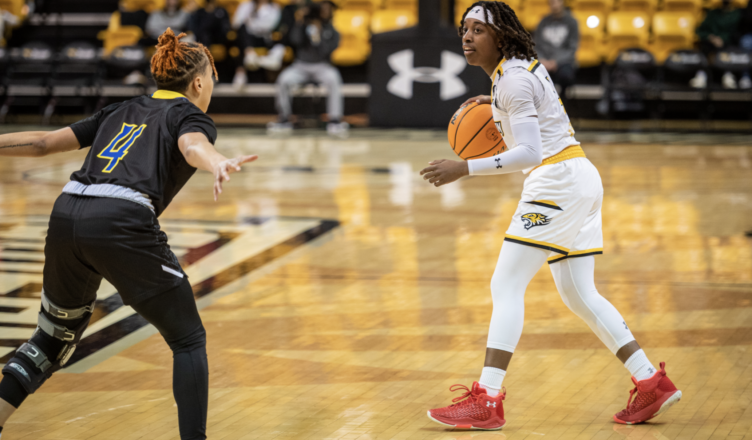 The Towson University (TU) Women’s Basketball team lost to the University of Delaware 85-71 at SECU Arena on Mar. 3.

Sophomore guard Tarriyonna Gary led the way for Towson, setting a career high in points with a total of 22. Gary went 7-10 from the field, including 5-7 from three-point range. Junior guard Aleah Nelson was Towson’s second leading scorer, with 19 points, as well as five rebounds and five assists.

For Delaware, sophomore guard Tyi Skinner had a career high 25 points, senior Jasmine Dickey had 23 points, and redshirt-senior forward Ty Battle had 18 points, along with a career high 24 rebounds.

In the first quarter, Delaware shot 55% from the field, including 43% from three-point range. Skinner and Dickey combined for 21 of Delaware’s 27 first quarter points, while Towson scored nine points as a team.

“It was a disappointing loss,” Head coach Diane Richardson said. “I thought we’d dug a very deep hole. We came out of it a little bit, but because the hole was so, so deep, it was hard to bounce back.”

The Tigers, down by 25 at one point in the second quarter, erased the deficit to six points in the quarter, and were down by 13 at halftime, led by Gary’s 11 points. Nelson and sophomore Allie Kubek, Towson’s top two scorers this season, combined for seven points on 2-11 shooting at halftime.

Kubek injured her eye after getting hit by a Delaware player, and ended the game logging 14 minutes.

“She’s seeing a doctor in the morning,” Richardson said. “I thought it was a dirty foul, and she’s got some damage.”

In the fourth quarter, Gary put up 10 points for Towson, with Battle scoring eight for Delaware. The Blue Hens won the quarter 21-20, and won the game 85-71.

With the loss, Towson’s record at home falls to 11-2, with both losses coming against Delaware. The Tigers still hold third place in the Colonial Athletic Association, with one more game coming in the regular season.

“We’ll have a great practice tomorrow, and then we’ll be ready for Drexel,” Richardson said.

The Tigers play their final regular season game on Saturday, Mar. 5 against Drexel at 2 p.m.