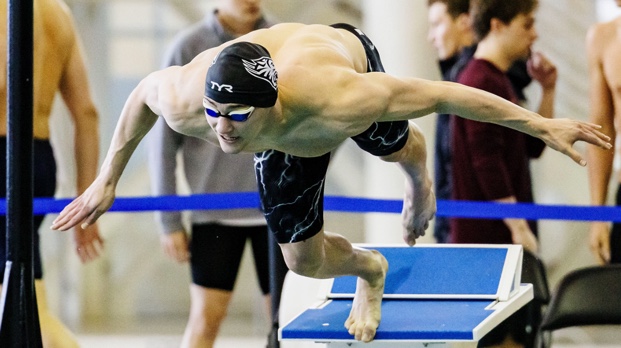 For the second year in a row, Towson University’s (TU) Brian Benzing was named CAA Swimmer of the Year, as announced on April 13.

In his second year with the Tigers, Benzing was named CAA swimmer of the week three times, defended his 100-yard breaststroke title, which set a new Towson, CAA, and CAA championship record, was selected to the NCAA Swimming and Diving Championships where he went on to earn a spot in the B final, and he picked up an Honorable Mention All-American Honor along the way.

“Something I see in Brian is that he doesn’t put a ceiling on what he can accomplish,” said Jake Shrum, former Head Coach of the Men’s and Women’s Swimming and Diving teams.  “He just comes in and works really really hard, which I think helps him come in and train at a different level.”

In the 100-yard breaststroke, Benzing set a new record in the CAA championships with a time of 52.34 seconds, causing his unbeaten streak in the event to be a dozen. Benzing’s time allowed him a spot in the last chance meet hosted by Princeton University, where he was able to improve his time once again, this time to 51.95 seconds, the 22nd fastest time in the NCAA.

With another new record and an even faster time, Benzing was selected to the NCAA Swimming and Diving Championships for an NCAA B Cut Time.

Going into the meet, Benzing was seeded 22nd but was able to set yet another record, finishing ninth with a new time of 51.47 seconds.  Benzing went on to finish 13th overall and fifth in the B Finals, setting another Towson program record as well as improving his CAA record.

“Leading up to NCAA’s, I just wanted to swim,” Benzing said.  “I felt more pressure at the CAA’s, which you wouldn’t think would happen, but heading into the NCAA’s I felt like I had nothing to lose.  I knew I could swim as fast as I did, but even after all the training you still are shocked.  I still can’t get over it.”

Teammate Nick McClure compared Benzing to Towson Swimming alumni Jack Saunderson.  McClure spoke on what it was like to watch the success of Benzing and be there alongside him.

“Benzing is one of the most selfless guys I’ve ever met,” said McClure.  “He’s one of the best to come through the program.  For him to go in seeded 22nd and come out ninth, that just shows what kind of person and what kind of athlete he is.  It was mesmerizing to watch.”

Benzing finished the meet earning Honorable Mention All-American honors, the first Towson swimmer to do so since Saunderson in 2018-2019.

Over the last two seasons, Coach Shrum has mentored Benzing, two-time CAA Swimmer of the Year, he has led the men’s swimming and diving teams to capture their first-ever CAA championship in 2021, as he was also named CAA Men’s Swimming and Diving Coach of the Year for that same year as well.

After six seasons as head coach of the Tiger’s men’s and women’s swimming and diving teams, Coach Shrum has stepped down from his position to take an assistant coaching role at the University of Virginia, his alma mater.

Assistant Coach Matt Lowe will serve as Interim Head Coach for the Tigers, as the search for a new head coach begins.