In the third inning, senior infielder Billy Lennox scored on a sacrifice fly from Grunberg.

The Tribe scored their lone run of the game on a bases-loaded walk in the fourth inning.

The Tigers added another run in the fifth inning with a RBI single from junior infielder Richie Palacios.

In the ninth inning, the Tigers pushed across three more runs courtesy of Grunberg and Gimblet.

Senior pitcher Michael Adams (3-2) secured the win as he allowed one run on three hits, while striking out eight through seven plus innings.

Junior pitcher Dean Stramara recorded his first save of the season.

“We played well enough to win a couple of games,” Head Coach Matt Tyner said. “The hitting or the lack of hitting is contagious. It’s reminiscent of the good baseball we can play.”

Due to predicted rain in the Williamsburg area, the teams played a doubleheader on Friday.

In game one of Friday’s doubleheader, the Tigers fell short of a comeback after scoring five runs in the ninth inning.

The Tribe got on the board in the second inning from a solo home run. They added four runs in the third inning to take a 5-0 lead.

In the bottom of the fifth inning, William & Mary plated two more runs to extend its lead to 7-2. The team added another run in the eighth inning with a bases-loaded walk.

In the ninth inning, Gimblet singled to score senior infielder Logan Burke. Grunberg followed with a double to score a run. Junior outfielder Craig Alleyne produced a pinch-hit double to plate two more runs. Masters then singled to drive in the fifth run of the inning. However, the Tigers were unable to complete the comeback and fell 8-7.

In game two, the Tigers dropped their second one-run game of the doubleheader.

The Tribe took an early lead after scoring a run in each of the first two innings. They added three more runs in the fourth inning to take a 5-0 lead.

The Tigers got on the board in the fifth inning off a two-run home run from Palacios.

Towson added two more runs in the sixth inning with RBI singles from Masters and Palacios to make it a one run game.

The Tigers failed to add any more runs, falling 5-4.

“We had a couple missed opportunities,” Tyner said. “Every run that we can get, we have to. If not, we’ll never get caught up and never get ahead. It puts us in a hole.”

On Tuesday, the Towson could not overcome a five-run first inning by Virginia Commonwealth, falling 7-2 in a rain-shortened game.

The Rams (19-10) scored five runs in the first inning after two walks and three singles to open the game.

In the bottom half of the first inning, Palacios’ solo home run got the Tigers on the board to cut the lead to 5-1.

The Rams plated two more runs in the sixth running to extend their lead 7-1.

The Tigers answered back as Gimblet scored on a wild pitch, but the Tigers could not overcome the early deficit.

Plagge (1-2) took the loss as he allowed five runs on four hits.

“We want to keep playing consistent baseball,” Tyner said. “We came to play and do our job.”

Towson travels to face Bucknell Tuesday and will return home to host Coppin State on Wednesday at 3 p.m.

The team will then travel to Charleston, South Carolina, to face non-conference opponent The Citadel for a three-game series. First pitch of the series is slated for 6 p.m. 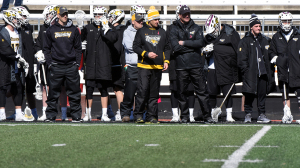 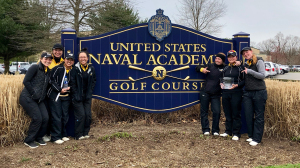 Next post Tigers take second at Navy
Editor in Chief