My father, Matthew Pipkin Sr., passed away on March 17, 2018, by my side as the sun kissed over the horizon in Annapolis, Maryland. Let me be clear: I have been nothing short of devastated by his sudden passing, and continue today to struggle to get back in an academic mindset for the remainder of the semester. With that said, I was approached by my psychology professor about material coming up later in the semester that related to the topic of death and grieving. While I did not need to make accommodations for the material, I deeply appreciated the kind gesture from the professor. Thinking of others in similar circumstances as myself, I can see the desire to have professors give a trigger warning before presenting material that could detract the student from the learning process. However, it is important to take into account all potential consequences from our actions, and the reasons stated below have me issuing a word of caution against making this into a strict mandate for all professors.

One of the signature initiatives brought by SGA President James Mileo and his administration is a motion to require all Towson University professors to provide trigger warnings before classes that contain material that could be viewed as “sensitive” to students. The rationale behind this is to protect students from potentially being negatively inhibited by material during class time, as a proper warning would serve to give students a chance to take appropriate action to prepare themselves before it is to be presented. While I sympathize with the rationale of protecting our students in the classroom, I stand by Provost and Executive Vice President for Academic Affairs Timothy Chandler and many others in believing that we could be setting a dangerous precedent by turning the Trigger Warning Initiative into a mandate, rather than a recommendation.

As both a student of political science and a conservative, I find myself often critical on the language and verbiage used in laws as I worry of their unintended consequences. To issue a blanket “mandate” for trigger warnings during class implies that there will be disciplinary actions as a result of professors being found in opposition to this. Due to the vagueness of what could be considered harmful or triggering to students, it leaves it up for individual interpretation. What I would consider triggering is going to be different from what another student will find triggering, which will both be different from what a professor views as triggering for his/her students.  This leaves students the opportunity to exploit the mandate and makes it a liability, as they could deem any class material they do not agree with as potentially triggering material. For the professors, this could lead to disciplinary actions against them, as they did not issue out a warning on the specified material. The idea of students retaliating against professors in this capacity concerns me, as it then forces professors to worry as they walk on eggshells in the classrooms. I support professors on using their discretion use trigger warnings when they deem fit, and hope my perspective will add to this necessary conversation. 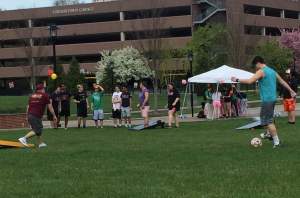