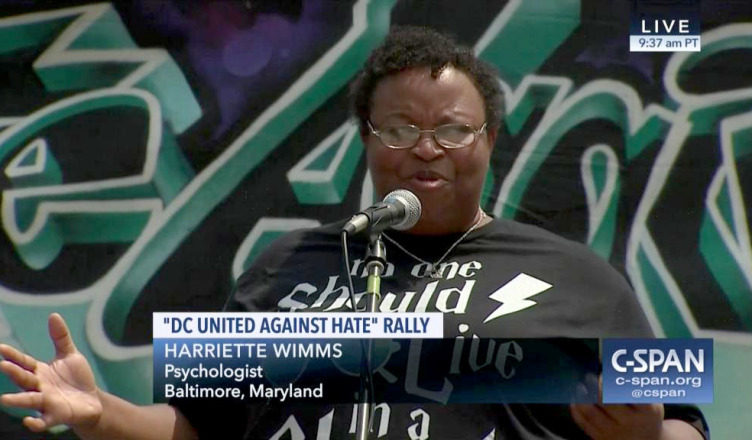 Wimms, a clinical psychologist and social advocate in Towson, is assisting individuals each day in expressing themselves and accepting their true identities.

She emphasizes the importance of “honoring the multiple identities that all of us have, and the beauty of all of us coming together.”

Wimms describes herself as a “black, queer, Jewish hebrew priestess,” all identities she has learned to love and accept.

Discovering these identities were in no way easy, but she knew she had to, “undo all of the layers that had been internalized and understand that all of my identities were not bad and not forbidden.”

She had always been told and believed that “black people can’t be Jewish.”

Once she had learned about the religion, she realized that her values lined up with those of a conservative Jewish person. Wimms then explored the feminine in Judaism and attended adult Bat Mitzvah classes at Chizuk Amuno Congregation Synagogue.

With the assistance of her Rabbi, Deborah Wechsler, she converted her religion to Judaism. Wimms worked to “push through marginalization,” and is now working on a benefit for Jewish people in Uganda who are hungry and without food.

Wimms said she has, “folded into my true self as I’ve gotten older and older.”

Wimms began work in Baltimore three decades ago, as an advocate for peace and love. She has taught children to use creative writing as a means of self- expression, and others art to promote less violence. Wimms also recently partook in the DC United Against Hate Rally, where she led a chant of “Love Wins.”

Towson Program Director of the Autism Studies program and colleague Connie Anderson said that Wimms is inspirational to work with.

“She is a dynamic, tireless, and committed individual, working towards justice on multiple levels,” Anderson said. “I know her as a fierce advocate for those with disabilities, including autism, for example, but as you can see through her efforts in support of African Jews, her passion to create a more just world extends beyond any one group or identity.”

In all areas, Wimms has made it part of her day to day life to promote love and acceptance throughout her community.

Throughout her journey, Wimms has formed countless bonds and relationships, including one with Dottie Poole. The two womens’ children attended the same middle school and have been friends ever since.

Poole said that “Harriette has taught me that true strength comes from being authentic to myself and to others.”

“She embodies all the qualities I value in a friendship- compassion, empathy, a great sense of humor, and a passion for justice,” Poole said. “Those just happen to be the very same qualities that make her such a natural and effective social activist. What I admire about Dr. Wimms is that she, as a woman, as a mother, and as a professional, lives her life in a way that her social activism is just an extension of her everyday life.”

The weekend of Oct.12-14, Wimms has extended an offer various artists, visionary scholars,activists for a weekend of healing, faith, dancing, singing and exploration of hope.

The weekend is taking place in support of the Ugandan Jews in Africa and Advocates for Children and Youth in Maryland. Those interested in learning more can reach out to Wimms at drharriette@gmail.com.