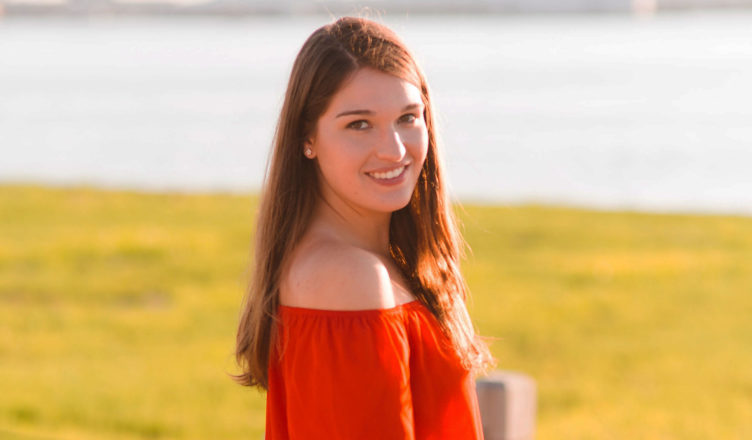 Born and raised in Kent Island, Maryland, Jennifer Crim, a TU alum, had quite the whirlwind experience trying to navigate both major and career. Today, she runs an award-winning music blog, heirwaves, with one of her best friends.

After graduating high school in 2012, Crim shared that she had no clue what she wanted to do. She ended up enrolling at Anne Arundel Community College, where she pursued film.

“I kind of had this period of time where I loved movies and TV and thought that that was going to be the industry I was going to work in,” said Crim. “I’m lucky enough that I’ve had opportunities to work on several big movies and TV shows.”

While she was able to get the inside scoop on how the film industry worked, Crim began to realize why the industry wouldn’t be realistic for her.

“Their lifestyle, it was so grueling,” she said. “I mean I was traveling all up and down the east coast to be in movies and TV shows, I was just like, this long-term is not where I see myself, as great as that experience was.”

In high school, Crim happened to have taken a graphic design course, and was on a marketing street team in New York City, both which circled back into her life as she searched for a new college, and a new career path.

“I really didn’t want to go to Towson,” said Crim. “My whole family had gone there, my mom, both my aunts, and it was so close I thought I didn’t want to go there. It ended up being the best decision I ever made, so I’m glad some part of my brain had that figured out.”

With her high school experiences in mind, Crim enrolled at Towson University with a major in graphic design and a minor in marketing.

“It was my first time away from home, living up at Towson,” said Crim. “It was a huge culture shock for me especially since I’m from Kent Island and that’s such a small town, and I was living with three other random girls that I’d never met.”

Despite the initial shock moving to Towson, Crim shared that she quickly became best friends with her new roommates, and dived headfirst into her program.

“I did all of these internships,” she said. “I finished college with seven internships. I managed to get a ton of experience.”

Through the mentorship of her professors, and the thought-provoking nature of her courses, Crim was able to realize, “I can be a designer in a different realm that I maybe had never thought about before.”

“After graduation I took a small solo road trip and came to Nashville and thought, this is it for me,” she said.

However, after moving back home from college, Crim shared that it took a while for her to get settled from the whirlwind of college.

“It took me about a year, and then I was like alright its time to make the move,” said Crim. “That was downright terrifying. I didn’t know anyone here. I was applying for jobs and getting rejected like seven times a day, and I was like, but I did all these internships! Why am I getting rejected? But it ended up just working out.”

Remember that aforementioned high school street marketing job Crim mentioned having? As it turns out, she became really good friends with another girl from the gig. That girl, Abigail Courtland, ended up starting a music blog called heirwaves, for which she wanted Crim to be a part of.

“We are putting all of our energy into doing that, which is such a full circle moment for me because its taken every aspect of everything I’ve learned and everything I’ve done,” said Crim.

Heirwaves is a New York City based music blog. The blog was founded in 2013 by Courtland.

“The basis of the blog is kind of journalism with integrity, and thought provoking pieces,” said Crim. “We focus on the music industry as a whole. With her being in New York City she focuses on a lot of pop and indie artists, and since I’m here in Nashville I focus obviously on the country artists. My main focus has been women and independent artists. We want to push the envelope and dig deeper.”

Crim shared that heirwaves is seeing much progression, and the pair is looking to further expand the company, including adding a Los Angeles-based correspondent.

“Being in college you’re kind of in this bubble,” said Crim. “I’m definitely someone that has a lot of anxiety, so I never thought that I would be able to leave everything I’ve ever known and move. I would say to anyone in that position, trust your gut.”

Crim encourages college students to be fearless about their dreams.

“If you know that that’s really what you wanna do and that’s what’s gonna be best for you, leave room for magic to happen,” she said. “Sometimes we try to force things and have our own timeline, but go into it head on and be really fearless about it. You’ll figure it out and learn and grow, but don’t be scared and don’t let your fear stop you from really pursuing that.”

She also advises for current students to take any opportunities you’re really drawn to, even if you don’t know how they fit in with your plan.

“Be open to opportunities, and be open to meeting new people and building new relationships and learning as much as you can as a student because when you get out of college and really see what the real world is all about, as much as you can bring experience wise and knowledge wise is really important, and I wish someone had told me that,” she said.