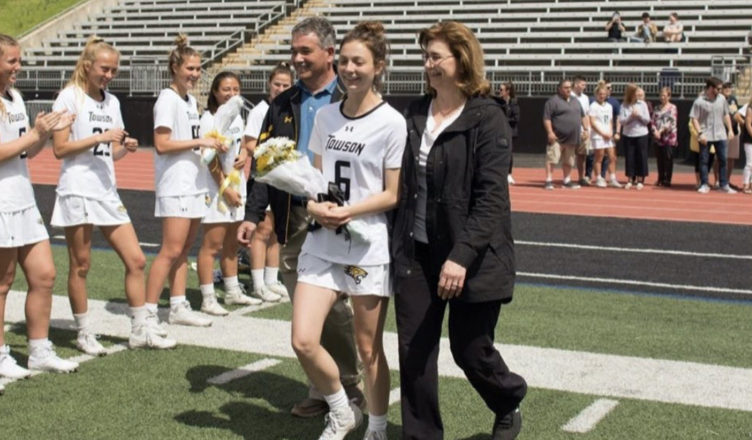 In mid-February, weeks before any stay at home orders were implemented in the U.S., John Chalk Sr. and his wife, Laurie Chalk, entered an early quarantine out of an abundance of caution for the safety of their family.

“We were so far ahead of everybody else,” said their daughter Alyssa Chalk, a recent TU graduate, and former attacker on the Women’s Lacrosse team. “We had to wear gloves and masks in our house, and we bleached every single room every two days. We even bleached the walls. We opened all of the windows and bleached everywhere because my parents were so terrified of us getting it, and it got us.”

Within the Chalk family, COVID-19 has taken the lives of three members, and infected two more.

Grandfather, Francis “Buzz” Chalk, nicknamed “Pop,” died from possible exposure to coronavirus while in the hospital battling cancer, on April 14. Grandmother, Pat Chalk, died on April 29 with a confirmed case of COVID-19. Most recently, Alyssa Chalk’s father, Chalk Sr., died only a week ago, also having tested positive.

According to Alyssa Chalk, her father had passed out when he first started experiencing symptoms, but told no one. After going to get tested, doctors immediately admitted Chalk Sr. into the hospital, where he tested positive for COVID-19.

After Chalk Sr. began demonstrating heavy breathing and gasping for air, emergency services directed the family to begin administering CPR while they sent first responders to the Chalk family’s Ellicott City home. He died in the arms of his family members, in his home office.

“My dad wanted to do everything on his own,” said Alyssa Chalk. “He didn’t even let the four of us when we were younger get a job. He’s even a self-employed architect working from our house.”

She recalls her father always insisting on providing, he wasn’t the kind of person to ask for help.

“John [Chalk Jr.] works for T. Rowe Price,” said Alyssa Chalk. “I feel so bad for him. He is so exhausted and looks so tired. Not a single one of us has been able to mourn because we are scared of losing our house, my dad built and designed our house 19 years ago completely on his own.”

Since her father’s passing, the Towson Women’s Lacrosse team has stepped up to gather a community of support for the Chalk family.

They have set up both a Meal Train, and GoFundMe to support the Chalk family.

“Tiger Nation,” tweeted TU Women’s Lacrosse. “We need your help to rally and support recent @TowsonU graduate and women’s lacrosse player Alyssa Chalk and her family through these tragic circumstances. Please share and donate through the link.”

Michael Molster, a former Assistant Coach for the Towson Women’s lacrosse team, has been working with Alyssa Chalk’s uncle to sort out the family’s financial bills, according to Alyssa Chalk. She also shared that Sonia LaMonica, head coach of the Women’s Lacrosse team, and Michael LaMonica, her husband and Assistant Coach to the Women’s Lacrosse team, met with all of Towson Athletics, and are calling coaches across the country, to spread the Chalk family’s story.

“‘They were very devoted parents, very involved in every aspect of the program,’” said Molster in an interview with the Baltimore Sun. “‘Everything John Sr. did was for the kids — the schools he sent them to, their education, and staying involved in their lives through college.’”

“There were three lacrosse sticks on the wall. A red one, a white one and a blue one,” said Alyssa Chalk. “He said ‘let’s get the red one.’ I took my lacrosse stick to practice and the coach goes ‘Alyssa, that’s a men’s lacrosse stick.’”

20 years later, she’s developed a network of support out of former coaches and teammates, who have served as catalysts in raising money to support her family.

“We would have nothing if it wasn’t for them,” said Alyssa Chalk. “Absolutely nothing. I love every single one of those girls and all of my coaches, I just had no idea that they loved me this much, and loved my dad.”

According to Alyssa Chalk, her siblings received the brains, while she became the athlete.

“My siblings didn’t play sports,” said Alyssa Chalk. “This is our network and we have to use it to the fullest of our ability. I am so grateful my dad bought me that lacrosse stick when I was three years old at LAX World”

Laurie Chalk, a 1985 TU alumna, and Alyssa Chalk’s Aunt, Marcy Chalk Geppi, are still fighting COVID-19 and quarantined in their own homes.

For other families being affected by this pandemic, Alyssa Chalk offers a message of hope.