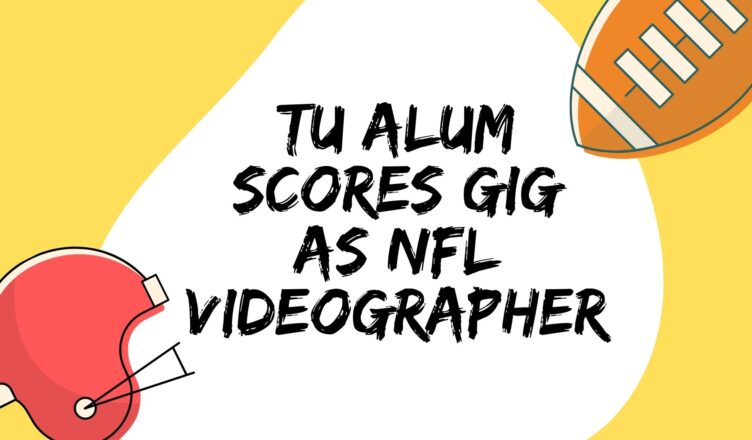 Former Towson Sports Network intern and TU alum, Brittney Everett, a freelance videographer,  had the opportunity to work alongside the FOX broadcasters during the Washington Football Team’s season opener against the Philadelphia Eagles on Sept. 13.

Everett graduated from Towson in 2018 and joined the Maroon PR team as a Multimedia Coordinator, in 2019. At the same time, Everett came upon the opportunity to freelance for NFL games.

“I was super excited, I actually joined a local union late last winter, they primarily do NFL games throughout the east coast so I had chances to do Washington and Baltimore football games,” Everett said. “I was really excited to work on a professional production and get hands on experience that I’ve always dreamed about.”

According to Towson Director of Digital Media Ben Rosenbaum, TSN relies on students like Everett and isn’t surprised that she received this opportunity.

“I didn’t know ahead of time that Brittney was working an NFL game, I knew she had done some stuff in the past in previous years but my reaction to it is I’m not surprised,” Rosenbaum said. “Brittney was an unbelievably hard worker here and getting to work an NFL game like that it’s not a surprise. Her work speaks for itself, she’s an unbelievable talent and she deserves these opportunities.”

Rosenbaum emphasized Everrett’s hard work and how she was someone who made everyone’s job a bit easier.

“She never had a day where she was dreading to be back at work and it didn’t matter the sport, it could be football, basketball, field hockey, volleyball, she was excited to be back at work,” Rosenbaum said. “It was another day to work on her craft, another day to be with her coworkers, she always had a positive attitude and everybody, myself included fed off of that.”

Rosenbaum used a volleyball game as an example of how important the student interns are. Each game requires three cameras, a broadcaster, and a person responsible for highlights. Rosenbaum said he relies on the interns, and hearing about alums like Everett makes it worth it.

“Students are huge for us and when you have people like Brittney and we’ve been fortunate to have a lot of really good student interns it makes work go so much easier and we’re able to turn out really good productions,” Rosenbaum said. “We love students, we want to make sure we give them every opportunity that they can have to grow and it pays off when you see someone like Brittney Everett work the sidelines of an NFL game.”

Everett joined TSN her junior year since she was interested in sports and had switched to major in Mass Communications. She heard from Towson professor Jennifer Atwater about the TSN internship and decided to apply.

While at TSN Everett filled many roles, she helped produce studio content and game broadcasts as well as feature stories about players and teams. Everett helped in areas such as lighting, directing, and editing among other roles.

“It gave me hands on experience, I feel you can only learn so much in a classroom,” Everett said. “TSN allows you to make mistakes within reason but then learn from those mistakes, build your career, and make long lasting relationships.”

On Aug. 29 Towson Athletics tweeted a video that highlights TSN interns and their experiences. With many responses and retweets, senior Rashad Christian responded with how grateful he is for his experience with TSN.

“I don’t say this lightly: TSN is quite literally the BEST thing I’ve done in college. Hands down,”  Christian tweeted. “From the types of jobs I did, to the opportunities, to the people I met and hang with to this day. There are other internships; none of them are *the* Towson Sports Network.”

For more information on TSN and their scheduled broadcasts, students can visit this portal and check out their Twitter and Facebook.