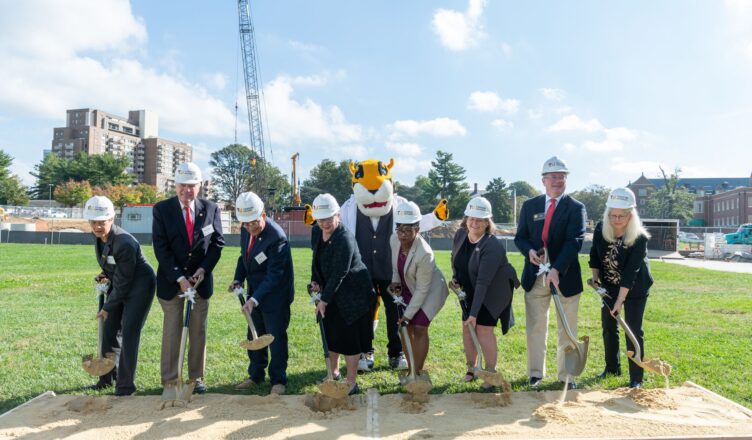 Towson University hosted an official groundbreaking ceremony for a new building to house the College of Health Professions (CHP, On Oct. 7. The CHP building is expected to open in summer 2024.

The groundbreaking ceremony was held on the Liberal Arts Building lawn. The event consisted of speeches by several different speakers followed by a ceremonial sod turning.

The closing speaker at the ceremony was Adrienne Jones, speaker of the Maryland House of Delegates. She presented a citation from the Maryland General Assembly in recognition of the groundbreaking ceremony to TU President Kim Schatzel.

Schatzel also spoke at the ceremony of the growing need for the building.

“Frankly, this building couldn’t come soon enough,” Schatzel said. “TU’s College of Health Professions has experienced tripling of its enrollment in the past 20 years.”

Jay Perman, Chancellor of the University System of Maryland, discussed the importance of the new building in broader terms.

“We have acute workforce shortages across the health professions and paradoxically but happily, a surplus of students who want to get into healthcare,” Perman said.

Kathy Ogle, associate professor of nursing, attended the ceremony. She talked about some of the opportunities that the CHP building will bring such as the expansion of undergraduate and graduate programs which are currently at capacity in Linthicum Hall.

“It’s a great symbol for the community that Towson is really invested in the College of Health Professions and in the Department of Nursing,” Ogle said.

Hayley Mark, nursing department chair, was also in attendance and discussed other opportunities that the building will offer.

“There’s going to be a very large simulation center with a mock hospital and many extra opportunities for simulation,” Mark said.

Ogle expressed her excitement of the headway that the ceremony symbolizes.

Attendees and speakers alike discussed their excitement for the new building and the opportunities and impact the building is expected to bring.

“The students that are going to come out of this building, they are truly the future of health care,” Perman said.