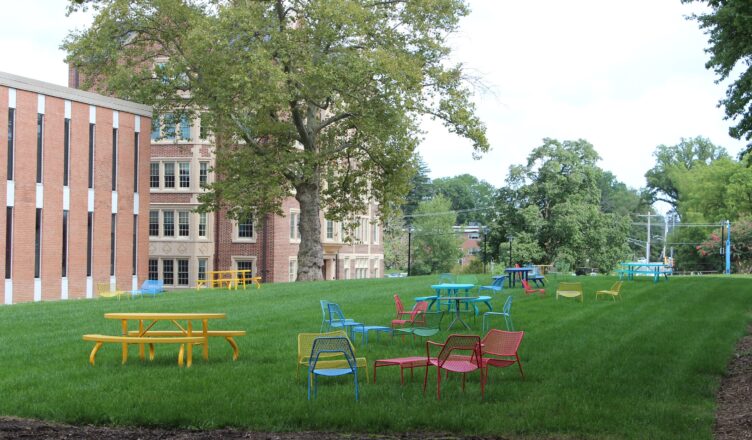 Several on-campus clubs and organizations have struggled with trying to figure out their next steps in terms of activity for the semester.

This is a result of the decision by Towson University President Kim Schatzel to move the majority of on-campus instruction and activity to a distance learning modality for the remainder of the Fall 2020 semester.

Jacob Engel, President of the Alpha Epsilon Pi fraternity, explained that the shift has substantially impacted his fraternity, specifically in terms of recruitment for this year’s cycle, known as “rushing.” The previously in-person rushing events are now virtual.

In order to make up for the lack of in-person word-of-mouth recruitment, the organization has turned to Facebook in order to gain attention to their fraternity.

“I think the biggest challenge is, I would say, getting people together safely,” Engel said. “You know, obviously, right now it’s tough due to things spreading so fast and easily, and it’s definitely been challenging to get safe events happening.”

Another challenge has been fraternity member dues. Being online, the fraternity decided to reduce member dues, which resulted in a 70% to 80% percent revenue loss.

The fraternity was planning on hosting some in-person events, outdoors, where social distancing measures could be implemented, but have since needed to cancel these events per University regulations.

“You can’t really make a community through a virtual space,” President of the Black Student Union Brooklyn Todd, said.

Todd explained that the BSU has reached out to prospective and returning members to get a feel for what they’d be interested in doing for the semester.

In terms of virtual participation, Todd explained that the organization hosted a live question and answer session on Instagram and was planning on doing another. Despite the limited number of students on campus, she explained that the organization’s recruitment numbers haven’t staggered because people are still reaching out to join. The Black Student Union has decided not to charge its members the typical $5 membership dues this semester.

As for the Model United Nations, President Zoe Wollenschlaeger explained that, like many others, this semester has been challenging due to the structure of the club.

“It changed a lot,” Wollemschlaeger said. “I mean, the main part of our club is like in-person conferences where we have like, the Model United Nations, and that has all had to go virtual. And it’s a really hard event to hold virtually because there’s so many different people that need to talk. There’s so much that goes into it. So that’s been really, really difficult to try to organize virtually.”

The group is planning on holding bi-weekly Zoom meetings to accommodate. Additionally. the Towson Model UN chapter plans on holding a virtual conference.

A virtual involvement fair was hosted by Involved@TU on Sept. 9. Approximately 138 clubs and organizations hosted individual video meetings where people interested could join the meetings to see what the organizations had to offer.

Thomas Potter, who’s organization is the Student Environmental Organization says he, as well as the other student leaders within the group, have struggled to find ways for students to get involved virtually.

“I feel like moving online, by itself, severely limited any student engagement even within officers and organizers over the summer,” Potter said. “Everything felt so chaotic that I only got in touch with a small handful of people. So getting anything close to the normal engagement that we had, even last semester. I don’t see that happening this semester.”

Potter blames the actions of the University for the organization’s struggles in terms of engagement. He explained that leadership within the organization were under the impression that there would be some level of on-campus activity this semester, thus they didn’t plan for virtual participation.

Mikenna Rogowsky, President of Cru, explained that while Schatzel’s decision did hinder their original plans of hosting socially distanced activities, the organization is continuing to have virtual events and meetings.

“We’re pretty much fully virtual,” Rogowsky said. “So we have large group meetings on Thursdays, and those have already started being virtual. And then we have Bible studies, which are also meeting we’re doing a lot of zoom Hangouts, zoom, Netflix parties and virtual game night, and we’re just getting creative online and abiding by the university’s decision.”

While Cru has implemented a plan for virtual activity, it’s still been challenging.

“I think that there’s a lot of people feeling disconnected from their college experience and from their friends and their community, whatever that is,” Rogowsky said.