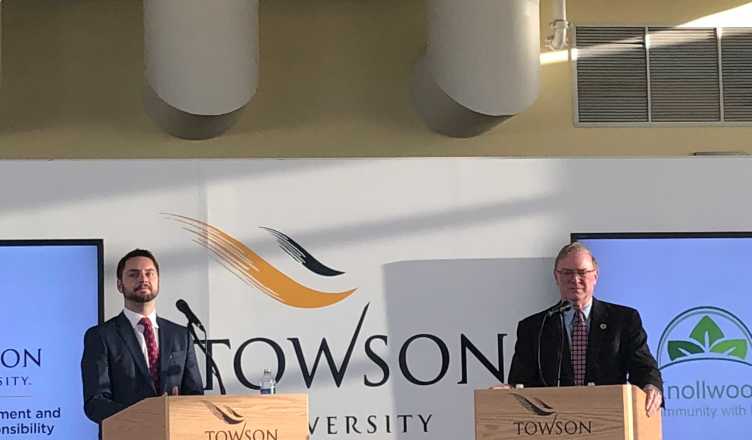 The Towson University Office of Civic Engagement and Social Responsibility co-hosted the “Future of 42” debate with the Knollwood Association in the Minnegan Room of Unitas Stadium Friday night.

Legalization of marijuana, the environment, revitalization of the Towson area, and working against partisanship were the hot-button issues under debate as candidates for Maryland’s District 42 state senate seat, and District 42A’s house of delegates seat, faced off.

The candidates were asked questions from a panel made up of Matt Pipkin, president of the Towson University College Republicans, Joshua Lash, president of the College Democrats of Towson, Luis Sierra, Assistant Director for Civic Engagement, and Neil Dubovsky, from the Knollwood Association. Pamela Wood, a reporter for the Baltimore Sun, moderated the debate.

The debates began with the Senate race between Leonard and West and the issue of legalizing marijuana.

Leonard said he was for the legalization of marijuana.

“Legalizing marijuana will provide massive tax revenues,” Leonard said. “Maryland needs to be a leader, we need to be the 10th state.”

West said marijuana negatively affects the brains of people under the age of 26. He also called recent negative statistics regarding marijuana use out in Colorado “horrifying.”

“I do not support the legalization of marijuana,” West said. “There is no way to test whether or not someone is under the influence of marijuana in the field. Until we come up with a method to test people on the highway, then I am against it.”

The two candidates attacked the Fair Housing Act in the Baltimore area, specifically regarding Section 8 housing. The Fair Housing Act prohibits housing discrimination based on race, color, religion, sex, disability, familiar status, and national origin. Section 8 Housing refers to a federal program in the United States which provides subsidized housing to families and individuals whose income is less than 50 percent of the area’s median income.

“You have to do the right thing, even if it is not the easy thing,” Leonard said. “Opposition against providing housing for low-income families disgusts me.”

West said he attended all the local high school graduations and was “shocked” by how diverse the schools were compared to when he was in high school.

Leonard jumped on this immediately saying, “Diversity should not be shocking.” The crowd erupted in applause.

Both candidates said the revitalization of Towson’s high schools would be their number-one priority.

“My number one priority is to build new Towson and Dulaney High Schools,” West said. “I received $150,000 to fix Dulaney’s athletic fields because their football field carried an electrical charge… you could see sparks jumping between the links in the chain link fence.”

Leonard also said he wants to give back to the area.

“I graduated from Dulaney High School,” Leonard said. “I was there when the new addition went up in the 90s… it’s shocking how run down it is now. I grew up here, I want to give back to this community and see it succeed.”

Both candidates also agreed that the current government systems in D.C. and the U.S. are failing due to the lack of bipartisanship.

“We need to restore faith in our democracy,” Leonard said. “I believe in democratic values, but I will stand for what’s best no matter where the idea or value aligns.”

“Our democracy is being destroyed by partisanship,” West said.

West said he decided to run for delegate to “bring common sense to government and make sure what happened in D.C. does not happen to Annapolis.”

After a short recess, the audience was introduced to the second debate between Lafferty and McIntire.

The panel asked the same questions to the second set of debaters, and the hot-button issues were virtually the same. Both candidates did, however, agree on the legalization of marijuana.

“I have questions about how police will determine if someone is under the influence or not, but I don’t think that should stop legalization,” Lafferty said.

“Prohibition isn’t going to be effective – it wasn’t effective with alcohol,” McIntire said. “Prohibiting marijuana will only encourage criminal activity. I do believe it should be regulated and I fully expect Maryland to have strict regulations.”

The second set of debaters did focus on the environment more so than the previous duo.

Lafferty said he wants District 42 and the state to decrease their reliance on fossil fuels.

“We need to focus and increase resilience to prevent further building projects so close to the coast lines,” Lafferty said.

McIntire said we need to focus on global warming.

“We need to introduce neighborhood electric vehicles,” McIntire said. “I am currently beta testing one now. These are like golf-carts, but can go up to 35 mph. Teslas are great, sure, but do you have $80,000 laying around? These carts are something that can take a lot of miles off the road.”

Lafferty and McIntire both agreed with West and Leonard about renovating the Towson area high schools.

“A new Towson high school should be a priority,” McIntire said. “It is the cornerstone of the neighborhood. We need to make Towson development work for the residents.”

All four candidates made it a point to use the revitalization of the Towson area as focal points for their debates, a note that resonated with the audience.

“I think the debate went really well,” Sierra said. “I really appreciated the candidate’s passion and care. They brought arguments up with care and respect. I appreciated their intentional and thoughtful answers.”

Matthew Schwartzman, a member of the Towson University College Republicans said he thought the debate went great and was very civil.

“They talked about many key issues,” Schwartzman said. “There were no hostilities and they combated the partisanship in DC.”

These four candidates can be found on ballots during the midterm election Nov. 6.