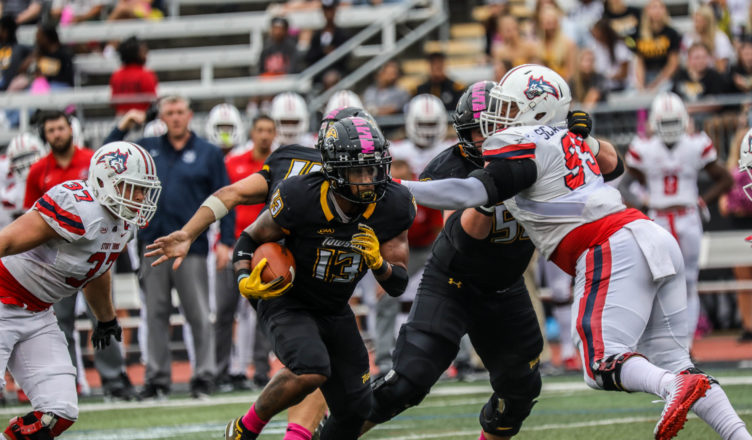 The Tigers found their rhythm offensively late in the first half and never looked back. As the offense gained momentum, so did the defense as Towson (6-4, 3-3 CAA) defeated Stony Brook 31-14.

The Tigers forced three turnovers, including two interceptions by redshirt senior linebacker Keon Paye. His second came in the end zone late in the game to seal the win.

“Bend don’t break, we gave up some really big plays but we stifled their run game hard which was what we had to do,” head coach Rob Ambrose said. “And while we did give up big plays, we played great red zone defense and that’s been getting better every week and you can see it.”

Despite giving up four completions over 20 yards, the Tigers defense remained focus and knew they had to make some stops.

Our guys are resilient, find a way, and it means a ton to them,” Ambrose said. “Not gonna let down, give it everything they have. We talk about never having an empty tank, that’s not from the head, that’s from the heart.”

Stony Brook used a blocked punt to cut the Towson lead to 24-14 with a two-yard touchdown.

Both teams played physical and there were multiple instances of pushing and shoving after the play. There were no penalties from these confrontations, but it was clear it was a playoff atmosphere for both teams.

“It is playoff football, its win or go home, it was last week and it was this week against two incredibly impressive opponents with great history of success, great players and coaches,” Ambrose said.

In the Tigers first possession of the second half, Feliz-Platt ran for 48 yards on two plays to set up a Flacco touchdown pass to redshirt senior wide receiver Shane Leatherbury

Towson took advantage of three offsides penalties and senior running back Yeedee Thaenrat scored a touchdown to increase the Tigers lead to 17-7 at halftime.

Towson capped off a 60-yard drive as Leatherbury scored a touchdown on a reverse.

Freshman defensive back Jeremiah Wynn made his first career start, and the Seawolves attacked him deep early. Despite his interception earlier in the quarter,  Stony Brook targeted him and scored a 44-yard touchdown.

Despite some early struggles offensively, the defense never quit and eventually found their rhythm.

“Didn’t make any adjustments just did our job,” Ambrose said. “For a football play to go well, usually 11 guys gotta be perfect. In those cases we had nine, we had 10, but we didn’t have 11 and we buckled down, tightened up a little bit and all of sudden we look like the offense we’re supposed to be.”

To end the first quarter the Seawolves completed a 71-yard pass to the Tigers 15, however, Wynn recorded his first interception to end their drive.

Midway through the first quarter, Flacco connected with redshirt junior wide receiver Caleb Smith for 41 yards. The Tigers failed to score a touchdown inside the five and Towson settled for a senior kicker Aiden O’Neill field goal. O’Neill’s 60th field goal set the CAA record for most field goals made.

“Somehow, he keeps putting it together game after game, year after year he’s been a tremendous weapon,” Ambrose said. “We’ve been very fortunate to have really, really good kickers. There’s been some great kickers in the history of this program and Aiden’s gonna be one of them.”

With the victory, the Tigers remain in the playoff hunt. Ambrose wants his team to finish strong and realizes the importance of the final two games.

“We love football, it’s gonna end one day, you keep playing your heart out until they tell you you can’t play football anymore,” Ambrose said. “That’s all there is to it, play your heart out for your teammates, for your school, until they tell you you can’t play anymore. There’s a finite level to this and our guys have seen it takes some maturity and wisdom to see that, but they’re playing like there is no tomorrow.”

Towson travels to Williamsburg, Virginia for their final road game against William and Mary. Kickoff from Zable Stadium is scheduled for 1 p.m. on Saturday, Nov. 16.