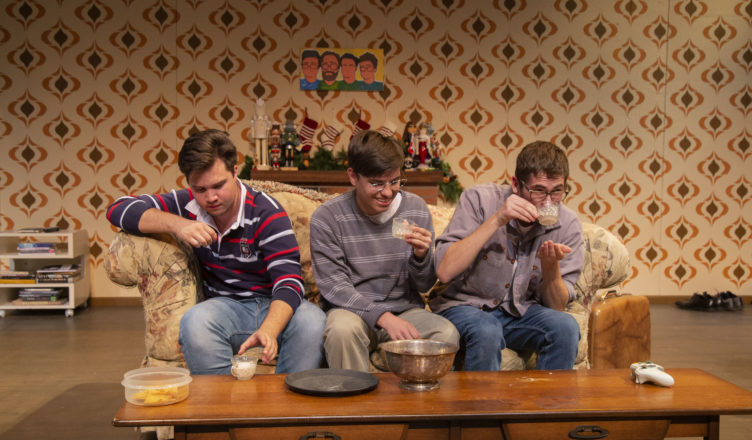 With more and more people demanding change, privilege and personal identity are two topics which are often on the forefront of discussion these days. Not only are these timely topics, but they are also the issues Keché Arrington, a junior Theatre Studies major, and the director of Towson University’s production of  “Straight White Men,” wanted to bring to light for audiences to learn from and discuss, especially after seeing the show.

“Straight White Men” by Young Jean Lee was presented onstage on Oct. 2 through Oct. 5. in the Ruth Marder Studio Theatre. The play is about three adult sons gathering at their father’s home to spend Christmas together. While their silly, childish antics are entertaining, it soon becomes clear that the three brothers, Matt, Jake, and Drew, are at very different points in their lives. Holiday plans are soon interrupted when they begin to question their identities and roles in a society that typically tends to mainly cater to people like themselves.

“I think the message is that if you have no opinion on something, then you’re just siding with the wrong side,” Arrington said. “If you’re not trying to create change, change isn’t going to happen.”

As the play goes on, the brothers find themselves divided, as each has his own idea of how to handle the privilege that they were born with. Matt slowly draws himself away from the others, and, although Drew is mainly concerned for Matt’s mental health, Jake is convinced that Matt is underperforming to allow someone else to step into his privilege.

Zach Ruchkin, a transfer student and EMF major, played Matt in this production. He gave his personal view on Matt’s choices and how they come to affect Matt’s family in bigger ways than expected.

“Matt’s character specifically chooses not to use the privilege he was born with, and that’s a struggle for, I think, the entire rest of the cast,” Ruchkin said. “In terms of general things that I see, it definitely seems to critique masculinity a little bit. In terms of Matt’s choice to be a kind of feminine character, to take the place of [the boy’s] mom who passed away.”

The other characters struggle with Matt not living up to the potential they believe he possesses.  Ruchkin, however, believes Matt found happiness while living this simple life, and the difficulty with his family mainly stems from the fact that they refuse to listen to him.

“I personally think he’s happy, I think he finally feels fulfilled, he finally feels useful in what he’s doing, and the irony of it is that nobody else in his family thinks that’s true, and they don’t want to listen to what he has to say,” Ruchkin said. “Not one time is Matt given the opportunity to really explain everything.”

Holly Adelhardt, a junior Theatre Design and Productions major, was the scenic designer of this production. She offered her own insight as to what the overall message of “Straight White Men” is.

“There was a major presence in the show, with [the characters] constantly saying that there was an issue with Matt, but nobody actually took the time to listen to what he had to say,” Adelhardt said. “I think that’s something that’s very prevalent in society; with people arguing with some of the minority groups that are trying to speak up, but no one’s actually listening.”

Adelhardt also shared what she hopes audiences will gain from watching the show.

“I kind of hope that people take away that they need to sit back and listen, instead of always placing ideas in other people’s mouths,” Adelhardt said.

Arrington shared their purpose in choosing “Straight White Men” as the project they wanted to take on, and bring to Towson’s stage.

“I’m not really afraid to offend people with the show, but I’m also not trying to alienate anyone,” they said. “I don’t want people to think that they are the villains in their own lives, I don’t want people to feel like the show was a personal attack on straight white men, I think it was just more so an evaluation of how people like this are created and what happens when you have all this power and aren’t doing anything with it.”