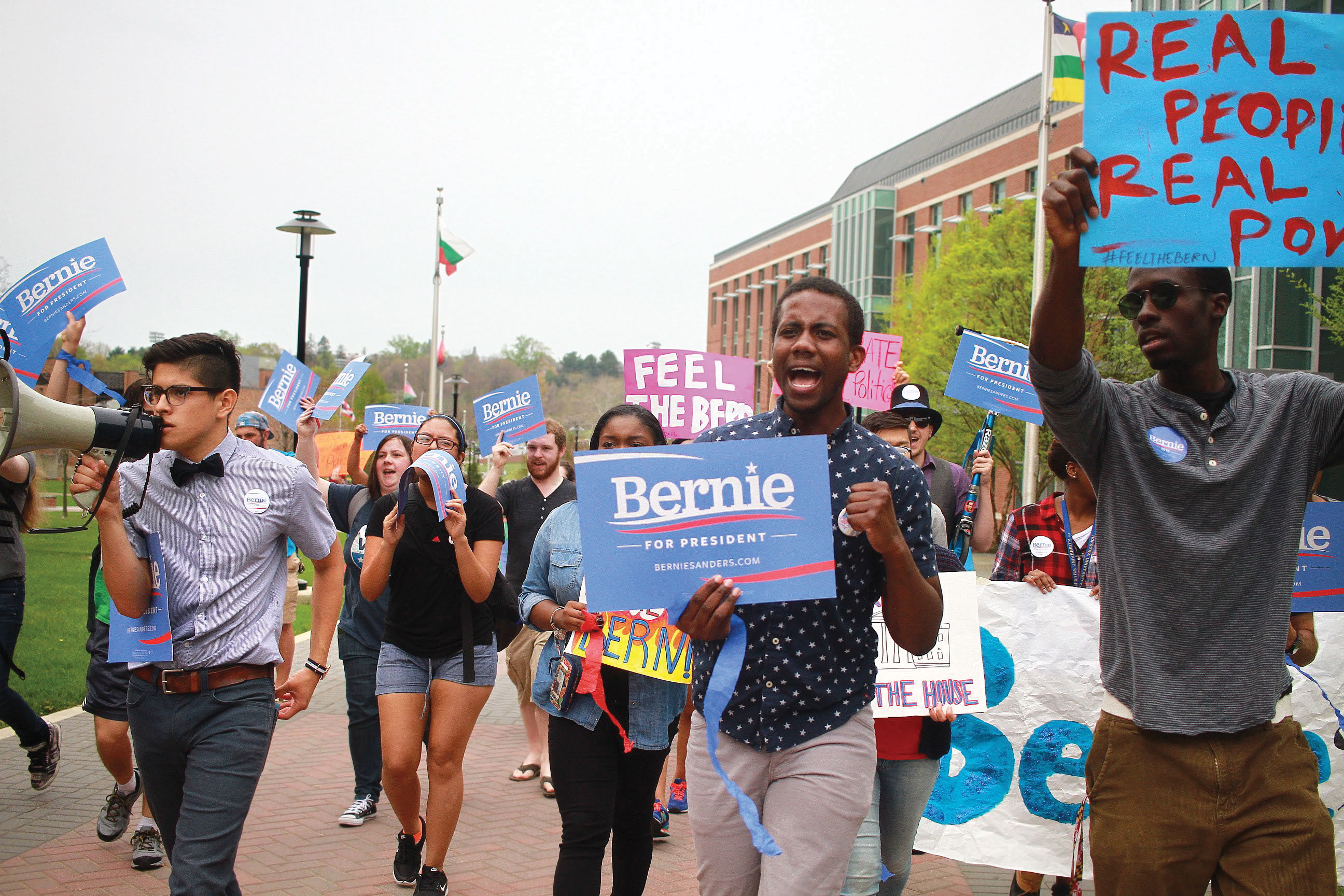 The march was organized by the Towson for Bernie Focus Group with help from Sanders’ national campaign and Maryland Students for Bernie Sanders, to get students interested in voting before Maryland’s primary election on Tuesday, April 26.

“It’s a march, so it’s kind of a hard thing to organize, especially on a college campus,” senior Filippo Bustamante, who helped organize the march, said. “We wanted to set up a whole bunch of events that would show pretty much Towson students that there is a huge support for Bernie Sanders here.”

Bustamante, carrying a megaphone, led the crowd behind him in a series of chants as they marched including, “feel the Bern,” “black lives matter,” “banks got bailed out, we got sold out” and “love trumps hate.”

“It’s all in support of a social cause, the political atmosphere that we want to progress as a nation,” Bustamante said.

The crowd carried banners and signs, and waved streamers as they made their way around the entire campus.

They walked up the International Walkway to York Road, and then to the corner of York Road and Cross Campus Drive. They traveled down Cross Campus Drive, onto Osler Drive, crossed the West Village Bridge and circled West Village. Finally, they returned to main campus and walked by Burdick Field and the University Union before they returned to Speakers Circle where they had initially congregated. 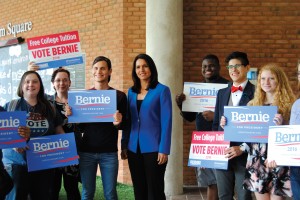 As they walked they received both support and resistance from observers. Some responded with “Feel the Bern” while others yelled “Trump,” and one made a rude hand gesture at the marchers.

When they returned they took a group photo before moving to Freedom Square where they joined the rally for unity that was taking place at the same time.

“The whole [Bernie] campaign essentially is ‘not me, it’s about us’ and just directly speaking on #TheTowsonIKnow the hashtag that is spreading … I think the students have to essentially stand up,” Bustamante said. “When you look at the general scheme of things this is a smaller incident but it can transcend itself over the whole United States.”

Bustamante said that one of the reasons he supports Sanders is because of the equality he promotes between all people regardless of race, religion, gender and sexual orientation.

“First and foremost we are humans and we should be supporting each other,” Bustamante said. “When I hear Bernie speak, it’s a genuine message in politics that I have never heard before.”

The march brought out not only Towson University students, but also high school students eager to get politically involved.

Atholton High School senior Samantha Lloyd attended the march with her friends. In the spirit of the march, Lloyd wore a Bernie Sanders T-shirt and earrings with Sander’s face on them.

“I think it’s important for us to exercise our right to vote and I think a lot of people our age don’t realize how important it is to vote,” Lloyd said.

The Towson for Bernie Focus Group also invited Hawaii Congresswoman Tulsi Gabbard to campus Thursday, and Bustamante said that her visit was “phenomenal.”

The students also canvassed the community over the weekend to raise awareness for Sanders’ campaign.

“A lot of people don’t feel like they can make a change and that is a huge issue,” Bustamante said. “That’s one of the reasons I got involved because when Bernie spoke he spoke about that, but then he took it a step further to say we as a people need to step up and take political action.”