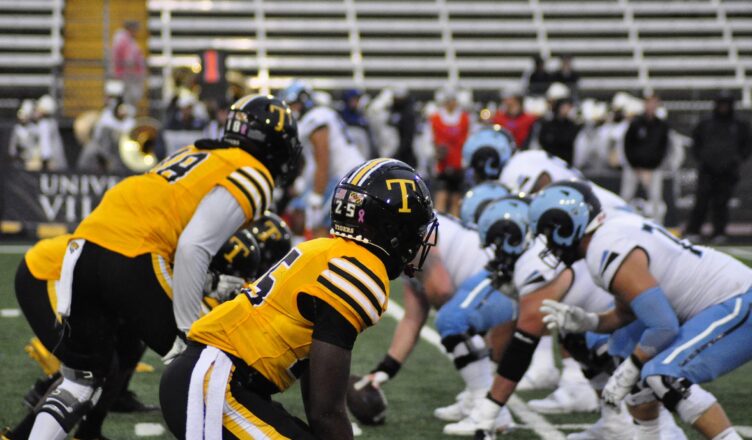 “I love my guys, the character of this team is something that’s contagious to be around,” Head coach Rob Ambrose said. “They keep working to get better every week. …Very, very proud of them and I’m a very lucky man I get to coach them. …Everybody in the world picked us to lose and it’s our own homecoming. It was a very good day.”

Midway through quarter one, redshirt senior linebacker Christian Dixon forced a fumble that redshirt senior defensive lineman Sam Gyeni recovered at the 19 yardline. The Tigers capitalized off the turnover when Matthews took the direct snap for his second touchdown of the game.

“We just got tired of losing, we know what we’re capable of,” Dixon said. “We just wanted to show everybody that’s us. That defense we showed the past two weeks, that’s us.”

Midway through the second quarter, Towson converted a fourth down on a pass from Ferguson to Epps. However, it resulted in a missed field goal by sophomore kicker Keegan Vaughan.

On the Rams’ next drive, they drove inside the Towson 10. A sack by fifth year defensive lineman Marcus Bowman led to a missed field goal in the final seconds of the first half.

“There’s gonna be a chance to win games with defense here now,” Ambrose said. “Especially if we can put ourselves in position where we’re up and we’re forcing the issue and making them throw.”

Midway through the third quarter, Caleb Smith made a contested catch for 29 yards. The Tigers ran a double reverse that resulted in a completion by Ferguson to graduate running back Jerry Howard Jr. Ferguson who finished off the drive with a touchdown to Jabari Allen.

The third quarter ended with a sack by redshirt senior defensive lineman Vinnie Shaffer, the fourth of the game for Towson. On the first play of the fourth quarter, redshirt senior safety S.J. Brown II delivered a big hit on a Rams receiver that prevented the first down.

“The whole entire sideline, maybe even the stadium was excited, turned up and that gave us the juice to go down and punch it in.” Howard said.

Late in the fourth quarter, junior wide receiver Daniel Thompson IV caught a 25-yard pass to enter the red zone. Two plays later, Howard dived in for a touchdown. The Tigers capped off the win with an interception by graduate cornerback Brandon Shuman on the final play.

Ferguson finished 16-25 for 191 yards and a touchdown with no interceptions. Howard had 27 rushes for 106 yards and a touchdown. Smith and Epps each had four catches and over 50 yards. Dixon led the Tigers with 11 tackles and two sacks. Towson’s defense combined for five sacks in the win.

“We wanted to prove to everybody we got what it takes to be in this league and compete and make a playoff run,” Howard said. “It started with this game because they were undefeated, we were their first loss, so I’m really excited to keep it going.

Former Tigers safety Coby Tippett, now a senior for the Rams, returned to Unitas Stadium and had four tackles.

Towson held Rhode Island to 162 total yards of offense while the Tigers offense combined for 338 yards. Towson also led time of possession by 15 minutes with 37:30 compared to 22:30 for the Rams.

“It’s really nice to look at this football team and know that it’s an entirely different team, much more successful than the ones that lined up against Morgan State,” Ambrose said. “And that’s what you want to see from your team. You want to see your kids get better throughout the season.”

The Tigers return home Saturday, Oct. 30 against the University at Albany. Kickoff from Unitas Stadium is scheduled for 2 p.m.