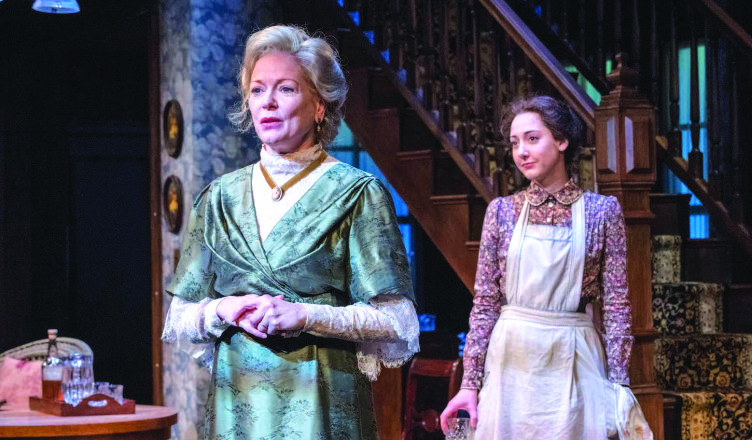 Towson University alumna Katharine Ariyan is stepping onto the stage of Everyman Theatre this spring for her role as Cathleen in “Long Day’s Journey into the Night.”

Ariyan graduated from Towson in 2015 with a B.F.A in acting. After graduation she moved to Baltimore City with a group of friends, and joined the Oven Theatre Company. Since then, Ariyan has been involved in many productions throughout Baltimore including “Hamlet” and “Hairspray.”

Ariyan praised Towson for its theatre program, and all it did to help her grow as an actress.

“Towson has an outstanding theatre program,” Ariyan said. “They really are able to focus on the individual and help every single person become who they want to become, and it was a wonderful experience. It helps you keep an open mind when working with so many other people who may have their own opinions and thoughts on different aspects of your work. Something Towson did was help us learn how to be adaptable.”

Something Ariyan’s work has taught her so far is how to keep evolving. Every theatre has their own aesthetic, and she often found herself changing to that aesthetic and learning from the new groups of people she worked with.

Since her days in college, Ariyan has been auditioning for roles at Everyman theatre. Upon moving to New York City, Ariyan found out she had booked a part in Everyman’s production of “M. Butterfly.” She quickly found herself returning to Baltimore for the role of Renee, a role that later earned her critical praise.

This spring, Ariyan is performing in her second production with Everyman Theatre, “Long Day’s Journey Into the Night.” In one emotional evening filled with “foggy, drink-laced demons,” the Tyrone family faces conflict when long-buried secrets become availed, and love doesn’t seem to be quite enough to protect them anymore. Cathleen, the role that Ariyan is portraying, is the family’s Irish summer maid.

“[Cathleen] is kind of this misunderstood character because she doesn’t completely fit in,” Ariyan said. “But she is very intuitive.”

The show’s script notes that Ariyan’s character is of Irish descent, with Everyman Theatre honing in on the region of Donegal, one of Ireland’s counties, as a more specific interpretation of the character’s accent. Ariyan has been working with Steve Satta, a professor of voice acting at Towson and dialect coach, in order to perfect her character’s voice. According to Jared Earley, the marketing and media relations manager for Everyman theatre, Ariyan’s dialect work has been quite a hit with audiences so far.

“This play is really long so it’s been a big one to tackle,” Ariyan said. “We started by doing a table read and the next day we were blocking for the stage. It’s been quite the process but I’m excited about it.”

“Long Day’s Journey Into the Night” will be running now through March 4 at Everyman Theatre in downtown Baltimore. Current full-time students are able to purchase tickets for $10 in B Location seating for all Sunday evening performances, subject to availability. Students must show a valid student ID when picking up tickets to receive a student discount.

Ariyan wants current Towson acting students to know “anything worth doing is worth doing well.”

“It’s important to just always work your hardest especially on projects you feel passionate about,” Ariyan said. “It’s a hard industry to work in but it’s incredibly rewarding.”