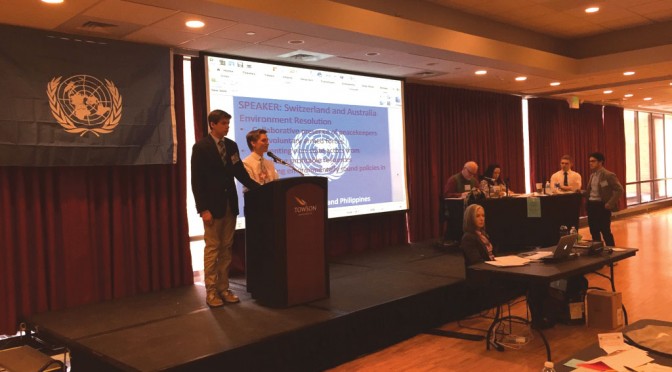 Faced with the daunting task of combating global terrorism, delegates from Switzerland and Australia stood before the United Nations General Assembly on Saturday aiming to pass a resolution to protect natural resources.

When the resolution passed by one vote, the Chesapeake Ballroom erupted in applause.

Coleman, from Owings Mills High School, was one of two students who represented Switzerland and this year’s Model U.N. Conference, co-sponsored by Towson University and Baltimore County Public Schools.

The first conference at Towson happened March 2003. Alison McCartney, a political science professor and faculty director for the Honors College, has played an integral role in organizing the conference since then.

“Towson students who are part of my Civic Engagement and International Affairs class every fall spend substantial time in and outside of class learning about international issues and their global/local connections and developing workshops on these subjects for the high schoolers for the fall Training Day,” McCartney said in an email.

Towson students volunteer personal and class time to prepare for the conference. McCartney said that the graduate assistant for the political science department, Michele Calderon, “should get a superhero cape” for the work she put in to help set up the conference.

This was Coleman’s first year at the conference, and he said that he’s already excited to come back. Coleman thought it was a valuable experience—both for the public speaking skills and for the imaginative work behind it.

“You have to see things from different perspectives,” Coleman said.

Students at the conference are supposed to behave like delegates from the countries that they are representing, even if those views do not line up with their own. Over 250 high school students participated in the conference—at little personal cost.

McCartney said that the conference has its origins in a 2002 meeting between herself and a social studies teacher at Woodlawn High School who was looking to provide a Model U.N. conference for low-income students.

“In the wake of 9/11, he felt that these kids deserved the opportunity to learn about international issues, just as those with money could,” McCartney said.  “He was inspired to become a high school social studies teacher because of his participation in Model UN when he was a teenager.”

The yearly conference has four fundamental components to its mission, including eliminating socio-economic limitations and meaningful participation by all students.

The participating schools pay $225 for a dozen students and one teacher and contribute an additional $20 for any more participants. The school system provides the transportation, the Honors College provides prizes and awards for students and the political science department, international studies program and the College of Liberal arts “pay for the rest,” including printing, tech support, breakfasts and room rentals.

This year, the TU Student Government Association paid for one of the breakfasts. Students or their families pay for their lunches in the Glen Dining Hall, which, McCartney said, was only $6 a day this year.

“I do not get paid extra for this work,” McCartney said. “I see it as part of my teaching and my service to the University, my students, and my community.  But I could never do it without the support and hard work of my colleagues, my students, and the department TA.”

Savannah Wilhelm, a Towson student who helped out at the conference, said she was “blown away” by how the weekend went.

“My favorite moments are when delegates ask myself and other Towson students such thoughtful questions we have to take a step back and really think,” she said in an email.

Wilhelm said it was an “unforgettable experience” and that she can’t wait for next year.

“When students become interested in issues our world faces now, I like to think it stays with them,” Wilhelm said. “That when they turn 18 they’ll be voting on some of these issues, that this experience will stay with them and encourage them to be active citizens.”