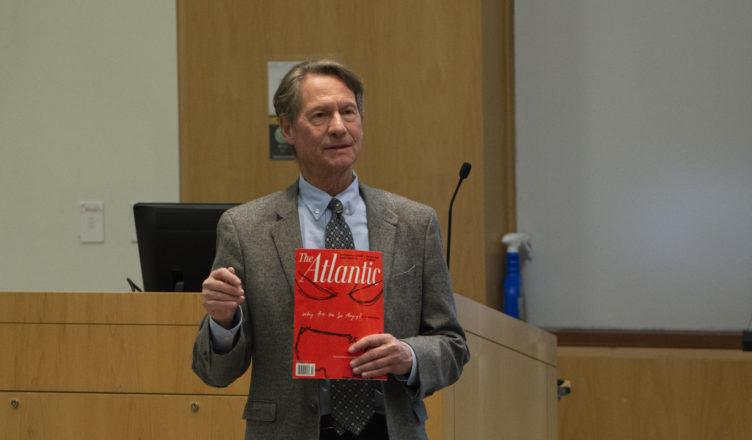 Towson University’s Journal of International Affairs hosted one of many segments in the Eric Belgrad Speaker Series on March 12 in an attempt to shed light on international issues.

Jack Fruchtman, a political science professor at TU, discussed the history of the American political system in his presentation “‘Just One Race Here:’ Foreign Law and International Norms in Constitutional Interpretation.”

Fruchtman discussed the British, Greek and Roman influences that have shaped the formation of American politics, as well as the idea behind the separation of power in the three branches of government.

Later, he related these topics back to his overarching theme by discussing times when he believed that presidents, past and current, had taken action that overstepped the boundaries of the executive branch.

“I changed the topic to something going on currently, and I wanted it to be more than just the history of the politics,” said Fruchtman.

Fruchtman said that politics and law have always been interesting to him.

“It is a moving topic, it is constantly changing, and you need to be on top of it,” Fruchtman said.

Paul McCartney, another Towson political science professor, said that Fruchtman’s speech was as outstanding as he expected. According to McCartney, Fruchtman is retiring soon and as such was invited to speak this time around.

“This was a good send off,” said McCartney.

Lindsey Robbins, a 2018 Towson alum, said what Fruchtman said was interesting, and she enjoyed the lecture.

“I was in the Political Science Department, and I knew he was a really good professor,” said Robbins.

Luis Sierra, the assistant director for civic engagement, said that the department decided to co-sponsor the event in order to help with event costs and keep it eco-friendly.

“We also try and partner with the faculty and student groups to spread the word for student engagement,” Sierra said. “With our relationship with Dr. Paul McCartney, he mentioned to Chris [Jensen, Director of Civic Engagement & Social Responsibility] about the lecture, and we discussed it and decided that it was way to be civically engaged.”

According to the journal’s website, the series was created in honor of Eric Belgrad, a Towson Political Science Professor who died in 2015.

Those who are invited to speak are encouraged to help guide the audience to think more clearly about the topic discussed instead of using “predetermined conclusions meant for the sterile kinds of ideological ‘debate.’”

The website also says that the series is held in the hopes that is will invite a wide variety of students to have conversations and participate in independent analysis.