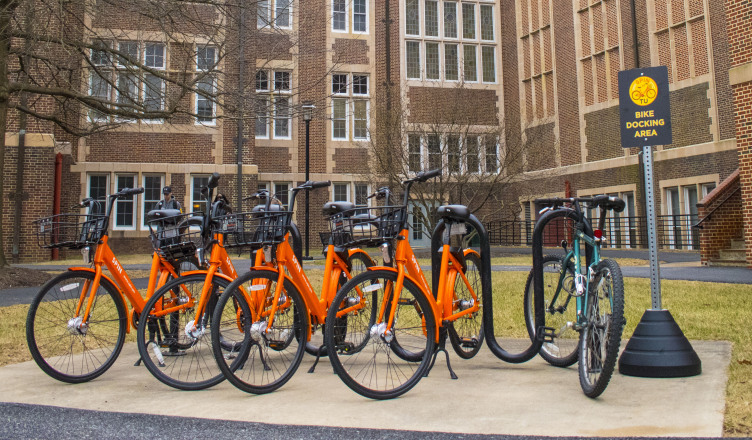 Photo by Zoe Huff/ The Towerlight

Towson University Parking and Transportation Services is managing a new bike share program on campus, which will allow students and faculty to rent bikes for as low as 50 cents per 30-minute trip.

Parking and Transportation Services is working with an app called SPIN on this new program.

According to Director of Parking and Transportation Services Pam Mooney, the University has been looking at different bike share companies to partner with for about five years now.

The University struggled in the past to find a bike share company that would be financially feasible. Most bike share programs would have required the University to purchase a bike rack, bikes, and locks, which Mooney said would have cost nearly $250,000.

That’s why when the SPIN app launched in July of last year, the University decided to start talking to the company.

SPIN is a rackless program, which means the University doesn’t need to purchase bike racks and locks because the SPIN bikes lock in a way that don’t require a rack.

To lock a SPIN bike, the rider simply presses down on a lever which secures the bike’s wheels from moving. Because of this, the new program only has “minimal cost” to the University in order to advertise and market the new program, according to Mooney.

Senior Nick Golden, who is a commuter, said he doesn’t think he will use the SPIN bikes.

However, Golden does see bike share programs as a “valuable investment” that are seen in bigger cities like New York and Philadelphia. He thinks Towson’s program could be a way to alleviate people’s parking stresses.

“I’m not trying to say Towson’s a big city, but a lot of people complain about parking, and things like that already, so bringing your car is already enough of a hassle,” Golden said. “But if there’s a way to get around campus without having to bring your car, like SPIN bikes, I think that’s a really good idea.”

In addition to the bike share program being convenient for students, the program was also launched with the thought of campus sustainability in mind.

Christian Piñeiro, the Student Government Association’s director of civic engagement and a member of the Alternative Transportation Sub-Committee of Parking and Transportation Services and the Climate Committee of the Office of Sustainability, advocated for the new program.

As a member of the committee, Piñeiro provided feedback on the bikes and test rode them when the SPIN company came to campus in October 2017.

“In these [committee] meetings, my department and I worked to find solutions and ideas for sustainable methods on campus, with the bike share program becoming a new priority to advocate for at the start of Fall 2017,” Piñeiro said.

“This bike share program will benefit the Towson community as agents of reducing pollutants of cars and shuttles while also being one accessible method of incorporating mixed-use transportation development on campus,” Piñeiro said. “Living in a car-centric campus, and with the growing concerns over Towson parking, SPIN bike will offer students, staff and faculty a fast and efficient way to get around campus if one is running late or simply for leisure.”

The Alternative Transportation Sub-Committee has been researching and preparing the campus for a bike share program for over a year. After drafting many resolutions, the sub-committee signed the final agreement this past December 2017, according to Piñeiro.

“In the past year, new bike share companies have been established that aim to eliminate the need for fixed bike racks, and their costs, across campus,” he said. “Instead, this new approach incorporates a locking system on individual bikes and allows more flexibility where bikes can be obtained and left at the end of a ride.”

Mooney described the bike share program as “Zipcar for bikes.”

“Towson will not make any money from having SPIN on campus as this program is similar to that of Zipcar, in that Towson partners with the company to provide a service to the campus community,” Piñeiro said.

Towson will distribute about 100 of SPIN’s bright orange GPS-enabled bikes throughout campus to start the program. Mooney indicated that the bikes will be distributed around campus in time for the start of the spring semester.

The SPIN bikes will be three-speed bikes to help riders combat Towson’s hilly terrain, according to Mooney.

To ride a SPIN bike, a person must first download the SPIN app in the app store. Next, the person will sign up for the program and make an account using their Towson email. After downloading the app, the rider can then see orange points on the map showing the GPS location of each bike on campus.

By using a Towson University email when signing up for the app, the rider will automatically get half-off the price of rides, making a 30-minute trip cost only 50 cents for students, staff and faculty.

Those not affiliated with the University can also take advantage of the new bike share program, but will not receive the half-off discount.

After signing up for the app and paying, riders scan the QR code on the bike, which will then unlock the bike for them to use.

Although the SPIN company advertises that riders may “park anywhere responsible,” Mooney said Towson will have signs up in certain areas around campus to tell riders where they can park.

Initially, there will be 18 “Bike Docking Areas” located across campus, according to Piñeiro.

“These locations may shift based on rider demand and preferences,” Piñeiro said. “The current bike guidelines will apply to SPIN bikes and the bikes are to be parked in designated areas to include bike racks and locations specifically signed as ‘Bike Docking Areas.’”

Mooney said that because the bikes are GPS-enabled, the SPIN app can monitor where the most popular start and end locations are for SPIN bike riders.

Mooney expects one of the most popular locations for the program to be people riding from West Village to the core campus.

“[The SPIN company] will be donating some money to the University to help with sustainability and to promote bike share,” Mooney said. “So, it’s a cool program from that aspect. It doesn’t really cost the University money, it’s easily managed, and it’s versatile in that if we see people who are moving things around and we find a spot where people are constantly trying to leave bikes, or they call us and say, ‘We’d really like to have a spot here,’ we can easily do that and move them.”

The SPIN company will manage the maintenance of the bikes.

SPIN also plans to employ Towson students who will redistribute bikes throughout the most used locations of campus and perform basic maintenance on the bikes. SPIN student employees will work with local bike shops if there’s any significant maintenance needed on the bikes, according to Mooney.

An advertisement for working for SPIN will be on Handshake, the Career Center’s online job database.

If a rider starts to ride a SPIN bike and notices the bike needs maintenance or is broken, the rider can report any issues on the app and the app will “lock down” the bike, making it unable to be rented until the bike is fixed.

Helmets will not be provided by the SPIN company or by Parking and Transportation Services for riders to wear. However, the University is planning on releasing a University Bike Policy in the near future which is currently being reviewed, according to Mooney.

Because Maryland law states that bike riders 16 and older are only encouraged to ride their bikes with helmets, Mooney said that it keeps the University from being able to enforce wearing a helmet, although she said it is “strongly encouraged.”

“Just be mindful of others when riding, as safety is our number one priority,” Piñeiro said. “Bikes are still considered vehicles so please be sure to follow all Towson University policies and Maryland state laws under Maryland Department of Transportation.”

Parking and Transportation Services is partnering with various student groups around campus to help spread the word about the University’s new bike share program including the SGA, University Residence Government, and sustainability groups on campus.

A bike lane going around the perimeter of the University is also in the University’s master plan as an effort to help make Towson a more bike-friendly university.

Towson University Parking and Transportation Services will be hosting an official kick-off event in April, according to Mooney.