The Towson University chapter of the National Association for the Advancement of Colored People encouraged spectators at Towson’s Oct. 8 home game against Stony Brook University to remain seated for the national anthem “as a symbol for peaceful protest to recent injustices,” according to a flyer that circulated online.

“The experiences of ethnic minorities, particularly African-Americans and Hispanic-Americans, is not reflected in the phrase, ‘the land of the free,’” Towson NAACP president Destini Collins said. “Today, that lack of inclusion is still relevant. We hope that students will reflect on the national anthem, a moment of patriotism, with a different perspective.”

This sit-in was a response to recent backlash against San Francisco 49ers quarterback Colin Kaepernick for his refusal to stand during the National Anthem before football games to protest racial oppression and inequality in the United States..

“I think it’s become so blatantly obvious that athletes and people in general have to react,” Kaepernick said, according to ESPN. “It’s not something that, with social media, there’s so many instances where it’s instantly to and you see these things every day, day after day and that’s hard.”

For a number of people, this brings them not only hope, but a sense that their concerns are being heard – for them, Kaepernick is their voice.

“As members of a community, we each have an individual responsibility to protect the rights and liberties of one another,” Collins said. “As an organization, our purpose is to educate, empower and engage our campus about issues concerning social justice and cultural competency.”

A group of faculty and students discussed the Kaepernick controversy during a New York Times Talk Oct. 7, hosted by the Office of Civic Engagement and Leadership.

Sports Management associate professor Ryan King-White explained that singing the national anthem during sporting events gained momentum around the time of the 1936 Berlin Olympic Games, when Adolf Hitler made a deal with the International Olympic Committee to play countries’ national anthems when they won a gold medal.

The conversation progressed into a discussion of what our national anthem means.

“We feel like that is part of our community that we all wanted to embrace being American after 9/11,” Faculty Professional Development Manager Wendy Gibson said.

One student posed the thought that, because of the immediacy of reporting, people are more quick to judge. Much of the group agreed, with students and faculty saying that the media can play a detrimental effect if people only read one source.

The discussion also covered how Kaepernick’s actions are affecting and influencing the actions of others, especially adolescents, as many students have begun to take a knee during their own sporting events.

Coordinator of Civic Engagement Kevin Albano posed the question of whether it is okay to use kneeling during the anthem as a form of protest.

“Something that sort of dismayed me a little bit about it, but didn’t necessarily surprise me about it at all, was that most of the talk surrounding it became about whether or not what he was doing was okay, until more people started doing it,” Albano said.

The next New York Times Talk will take place Nov. 2 in the University Union, Room 314. 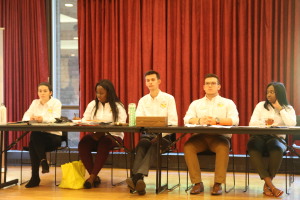