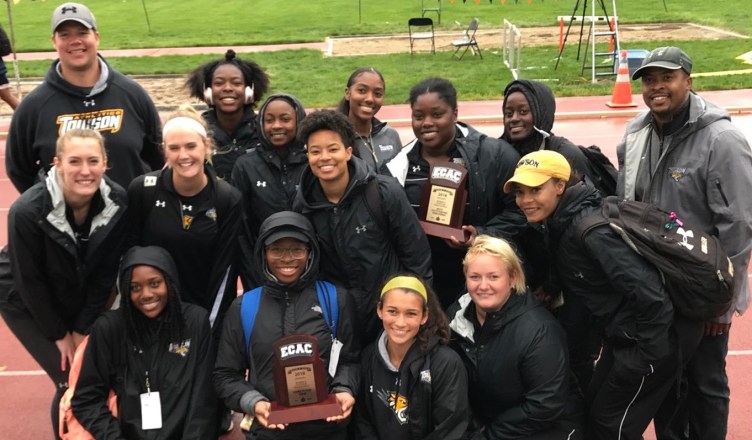 Head Coach Mike Jackson was pleased with his team’s performance.

“It was the very best performance in team history, so [I’m] really excited as the team finished on a high note,” Jackson said. “I think we really established respect within our sport.”

Towson was given a team trophy for its performance at the championships.

“They were even more excited than I was,” Jackson said. “Some of them didn’t feel that they had great individual performances, but it’s all about the team and they were really pumped up about it.”

Junior Lauren Coleman won the shot put and took fifth in the hammer throw with a personal best toss of 187-7, which ties her for 47th in the NCAA East Region.

“She was named the outstanding performer of the entire meet, so she did outstanding and she’s really primed and ready for NCAAs first round,” Jackson said.

Senior Ksenia Safonova placed second and set a new school record in the hammer throw with a 204-7 toss, which is 11th in the NCAA East Region and 28th nationally.

“She waited till the last meet before regionals to really show what she can do, so she’s been having a year where she’s just trying to get it together and she finished well with a personal best and school record,” Jackson said. “She’s been to regionals before and experienced it, so now she’s ready to try to qualify… for the national championships,”

Safonova, Coleman, Phontavia Sawyer and Megan Kelly will be competing in two weeks in the NCAA East Preliminary Round.

“We have four athletes who are qualified for the NCAA first round which is in Tampa, Florida,” Jackson said.

Jackson has high expectations for the four athletes who will compete at the University of South Florida Track and Field Complex in Tampa, Florida May 24-26.

“I expect them to compete to advance to the national championships to be able to keep represent Towson,” Jackson said. “They’ve been working for it all year and I know they’re excited about it, and I believe they’ll get the job done.”