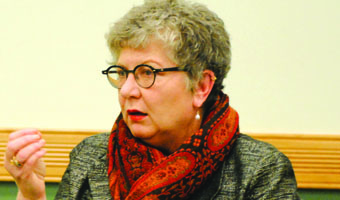 In a message to the campus community, Towson University President Kim Schatzel reiterated that the administration remains committed to creating a community that benefits all students — regardless of immigration status.

“We will continue to support all members of our community to the greatest extent possible within the law,” she wrote in her message.

According to Schatzel, the University is working to determine if any Towson University students are affected by President Trump’s ban on immigration from seven majority-Muslim countries.

The University System of Maryland issued guidance on Trump’s recent executive orders. According to the guidance, USM schools “may choose not to engage in voluntary immigration enforcement activities that are not required under applicable laws.”

Schatzel also reiterated five positions that TU is taking on issues of immigration, including not allowing federal immigration enforcement authorities on campus without a warrant.

The new announcement did not originally include an item that discussed detaining immigrants,  but has since been announcement has been updated. A TU spokesman clarified that it was an unintentional omission, not a signal of a change in policy.

In her message, Schatzel announced, “I fully concur and support” a statement from the Association of Public & Land-Grant Universities which states that the 90-day ban on green card and visa holders from certain nations should be “promptly reconsidered.”