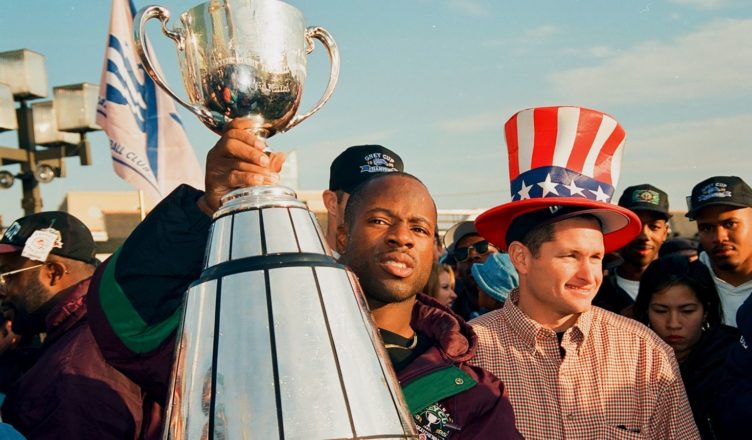 The City of Baltimore has a rich sports history. Legends with names like Johnny Unitas, Jim Palmer, Frank Robinson, Cal Ripken and Ray Lewis have contributed to the decades of success Charm City has celebrated.

But what about names like Don Matthews, Tracy Ham, O.J. Brigance, Mike Pringle and Elfrid Payton? These are the names of those who brought championship football back to Baltimore just when the city thought it would never return.

But just as quickly as they emerged, these names were gone. I’m talking about the Baltimore Stallions, the briefly seen, and often forgotten champions of the Canadian Football League.

For two years in the mid-1990s, the Stallions turned Baltimore into a football city again as they reached the 1994 CFL Championship, known as the Grey Cup, and then captured that championship in 1995, their last game as a franchise.

Ron Snyder, a former sports reporter in Baltimore and a journalism and new media professor at Towson University, tells the story of this small blip in Baltimore’s history in his book “The Baltimore Stallions: The Brief, Brilliant History of the CFL Champion Franchise.” A Baltimore native, Snyder interviewed numerous players, as well as reporters, members of the Stallions staff and fans of the team for this book.

Tim Klapac: What inspired you to write a book about a team that lasted only two seasons?

Ron Snyder: I was a sports journalist for many years here in town and I was always fascinated with the story of the Baltimore Stallions. I always felt like it was a “30-for-30” type of story. I was 5-6 years old when the Baltimore Colts left that snowy March day in 1984 and I was 18, a freshman at Towson, when the Ravens played their first season in town. So, I went my whole childhood without a professional football team to call my own.

When Baltimore lost out on expansion to Jacksonville and Charlotte, we here in Baltimore thought we’d never get a football team to call our own and we kind of gave up on having an NFL team. Then one day, this businessman named Jim Speros comes to town, says you know what, we are going to give you a football team.

They did everything we asked them to do as a sports team in town and they never got the right justice, we never gave them a proper goodbye. I always felt like it was a great story to tell because if you like sports, this has everything. It has drama, it has success, it has failure, it has everything you want in a sports story.

TK: How long did it take you to gather all of your sources for this book?

RS: Being as connected as I am in town, I started with Mike Gathagan, who is with Towson Athletics now, but he was the PR director for the Stallions. I told him about my interest to do this book and, next thing I know, within 10 minutes of me telling him I had this book idea, I had numbers for the 10 biggest players that were available.

Guys like Tracy Ham, Mike Pringle, Chris Armstrong, who is a high school football coach in town, Josh Miller, the punter who went on to win a Super Bowl ring with the Patriots, along with former Towson players like Dan Crowley, the great quarterback from the early to mid-90s for the Tigers. And then, those people said, “you need to talk to these people,” and I knew the reporters and sportscasters that covered the team.

Guys like John Ziemann, a great sports historian here in town that was the head of the Colts Marching Band, then the Ravens Marching Band, and at the time, the Stallions Marching Band, a great resource as well. Everyone was just so excited to tell this story and I ended up having more information than I actually needed, but I wanted to include it all.

TK: During your research, was there any information you discovered that surprised you?

RS: Combing through my research, there was a lot of angst in Canada among fans who weren’t excited to see the CFL expanding into the United States. They considered the CFL to be the Canadian Football League, not the North American Football League. Despite the fact that many of the players that were on the Stallions were bona-fide CFL stars prior to joining the Stallions, they didn’t like the fact that an American team could win the Grey Cup.

TK: One of the contributors to the Stallions success was timing, with no football in Baltimore and the MLB strike in 1994. Do you believe this franchise would’ve been as successful without that timing?

RS: I think it was a perfect storm. It was a combination of angst over losing the Colts, anger over the NFL for not getting an expansion team and [NFL commissioner] Paul Tagliabue famously saying maybe we should take that money and build a museum, and it was the baseball strike.

Back then, the Orioles were the only game in town, and we lost baseball to the strike. Maryland football was not relevant during that time, Maryland basketball was just finding their way under Gary Williams, Navy football was in a down period and there was no NBA team here.

So, at the end of the day, if you wanted to watch professional sports, or any sports for that matter during that time, especially in 1994, the Stallions were it.

TK: Do you see the Stallions success as a catalyst in bringing the Browns to Baltimore?

RS: I think the fan support for the Stallions in Baltimore was the icing on the cake.

Cleveland had trouble with giving [the Browns] a stadium, Baltimore had the funding in place for years and years through the Maryland Stadium Authority and the Lottery Fund. The package was there for someone to take. The fact that Baltimore showed that they could attract 30,000-40,000 fans to a CFL game helped.

Did it expedite things? Maybe.

Think of a generation that didn’t know what it was like to have a football team of their own. I was a Dolphins fan growing up because those were the games we got. At the end of the day, it taught Baltimore how to be an NFL city again.

TK: There are quite a few Towson University connections with the Stallions, including Senior Associate Athletic Directors Dan Crowley and Mike Gathagan. What does that connection say about the Stallions’ deeper roots with the Baltimore community?

RS: It was like a supernova. They came in like a ball of fire, they won and then they were gone as fast as they came, so we never had to deal with any of the downs. If this team had been the Las Vegas Posse, the Memphis Mad Dogs or the Shreveport Pirates, any of those other CFL teams that weren’t successful on the field, they would’ve just been a blip in history.

Not only that, they were in town, they went to the schools. Much like the [Baltimore] Blast who are out all the time, much like the Ravens are now, [the Stallions] were out in the community and they were approachable. These guys weren’t millionaires, they played for love of the game.

They had so many local connections, they had Crowley on the team, they had Mike Gathagan in the PR box. Mark Orlando, the great wide receiver for Towson, was also on that team. Irv Smith, who was a defensive back and is now a Montgomery County firefighter, was a University of Maryland standout.

They had their training camp on [Towson’s] campus, at what was then called Minnegan Stadium. Gordy Combs, the great football coach, was a volunteer there. It was something that the community embraced while they were here.

TK: What was your favorite takeaway in putting this book together?

RS: The thing that amazes me the most, that even 25 years later, and a lot of these players and executives, who went on to have great careers, whether in the CFL, in business, in the NFL, have said that the two years they spent in Baltimore were the most fun of their career. It was such a small portion of their careers, but anytime you want to let them talk about the Stallions, their face lights up.

What I love about writing books is you find stories off the beaten path.

TK: You mentioned that the Stallions never got a proper goodbye. What would you like to see done to honor them?

RS: I would love to see a way for those players to come in and those fans to give them the proper thank you that they didn’t get to give them 25 years ago, and for a new generation to see what that time in Baltimore was like.

I hope everyone picks it up and enjoys the book. This is a time when we’re all looking for a distraction, we’re looking for something that can take our minds off everything that is going on in the world right now. Now is a good time to take a walk back down memory lane and immerse yourself in what I think is a pretty good book.

Snyder’s book, “The Baltimore Stallions: The Brief, Brilliant History of the CFL Champion Franchise,” is available now on Amazon and through McFarland publishing.

This interview has been edited for clarity and brevity