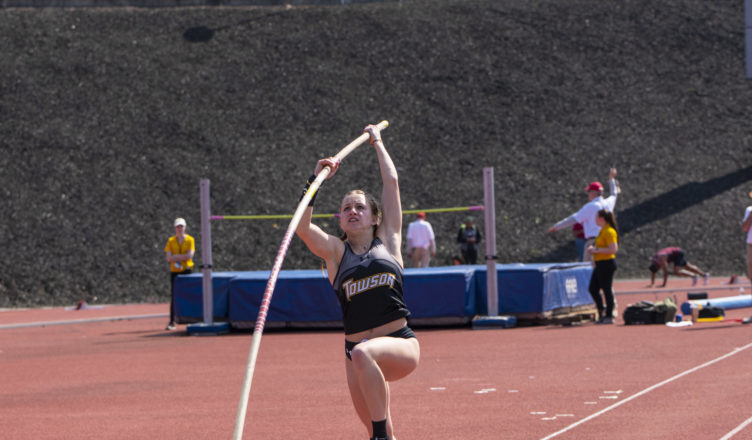 “We had some things that didn’t go our way, but there were some outstanding performances,” said Head Coach Mike Jackson. “We had a number of conference champions. We’re just disappointed. It stings a bit.”

Junior Michella Obijiaku set a new CAA record in the shot put with a toss of 16.23-meters. Obijiaku was named the Most Outstanding Female Field Athlete as she also became the first Towson athlete to win the hammer throw throwing 58.77-meters on Friday.

“It was special,” Jackson said. “She’s always special at championship meets and we’re excited to have her and excited that she continues to improve and gain confidence.”

“I talked to the team and we’ve never won a four by four in conference and they really had their game face on and made a chase in order of the relay,” Jackson said. “They competed extremely well and did something special and also broke a school record so I’m happy with how we started and finished the race. They never gave up.”

The 4×100-meter relay team of Reid, Waller and freshmen Shamika Burton and Crystal Johnson set a new school record with a time of 45.42 seconds, winning the event. This victory marks the second consecutive year that Towson has finished first in the 4×100-meter relay with Reid and Waller contributing in both years.

“We’ve been the best relay all season so that’s something we planned on doing, but there was some great competition from the other teams, but we were able to come out on top,” Jackson said.

Reid, who finished the meet with three gold medals and a bronze, became the first Towson athlete to win the 400-meter dash at the CAA Championship as she set a new school record timing 54.03 seconds.

“I told the team there was another athlete in the conference that was named track athlete of the meet and no disrespect to her. She did a great job, but in our minds Liz Reid is the track athlete of the meet,” Jackson said. “Just the sacrifice she made in that meet itself… every single event she had was a record. Liz Reid does what Liz Reid does and we’ll never replace her and she’s someone that’s very special to our entire program, the athletics department and the university.”

Towson won the 400-meter hurdles for a third straight year after Francis set a personal-record time of 59.11 seconds which became the second-fastest mark in school history.

Johnson’s winning time of 11.92 seconds in the 100-meter dash resulted in Towson’s third victory in this event in the last four seasons.

Freshman Hayley Horvath became the third Towson athlete in four years to win the pole vault as she cleared 4.1-meters in fewer attempts than Delaware senior Ashley Bailey on day one of the meet.

“It was quite possibly the best competition of the meet between her and another athlete from another school,” Jackson said. “She always battles and we’re just excited to have her and she is the best pole vaulter we’ve ever had in our program, but she’s going to just be one of the best athletes we’ve ever had in our athletics department.”

Towson finished day one of the meet with 36.6 points.

“It was great to see everyone come and be ready for their races and for their competitions and that’s what Towson does,” Jackson said. “Individually, it was a special weekend and we’re just extremely disappointed that we didn’t come out with a team win.”

Some Towson athletes will compete at the Eastern Collegiate Athletic Conference (ECAC) Division I Outdoor Championships on Saturday, May 11 and Sunday, May 12 in Princeton, New Jersey.

“My expectation is to win the whole thing,” Jackson said. “We got third [in 2018] and we’ve got a little bit of a chip on our shoulder right now and we’re planning on winning that championship, coming home with the team trophy.”