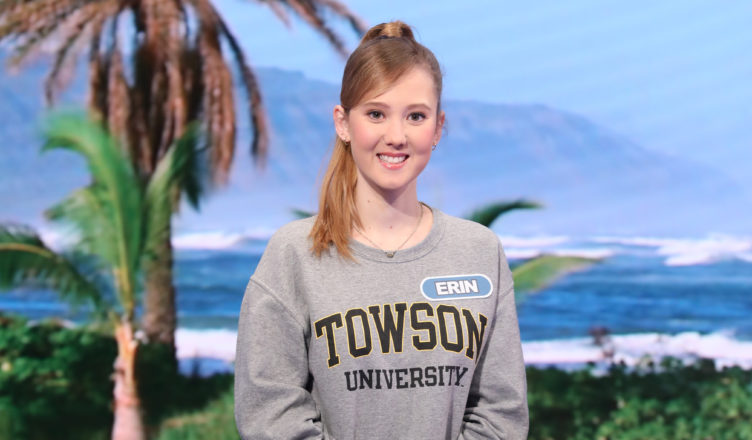 Erin Brockmeyer, a senior at Towson, will be appearing on Tuesday’s episode of “Wheel of Fortune” for their week-long “America’s Game” themed series.

Brockmeyer’s journey began when her mother, Shirley Brockmeyer, heard an advertisement on TV for a “Wheelmobile” event coming to the Maryland State Fairgrounds from June 8-9, 2019. She casually marked the event down on her calendar.

According to Erin Brockmeyer, she had gotten herself into a bad situation, picking up a job that got her up early in the morning, and kept her up late at night.

“With everything going on in my life I had forgotten about [the Wheelmobile event], but then I saw it on the calendar,” Erin Brockmeyer said. “I had work all day on Saturday, but only had one shift on Sunday, so after work I drove home, quickly changed and left without telling anyone at the house. I was going to enjoy at least one afternoon that summer!”

She added that she intended on making the event a mini vacation, since her schedule didn’t allow any other vacation time last summer.

At the event, which was spread across four hours, individuals could line up at the top of the hour, fill out an application, and if they got called, play minigames on stage. Brockmeyer shared that after going through this process twice, she still had not been chosen to partake in the minigames.

“Then my mother showed up and we got in line together, dropped our applications, and watched the mini games,” Erin Brockmeyer said. “Finally the hostess calls ‘Shirley Brockmeyer from Hampstead.’ I lost my marbles. I was so excited for her! She played her mini game, I cheered and took pictures.”

Anyone can submit an application, but not everyone will be randomly picked to go on stage and partake in the minigames. However, all of the applications they collect still get sent to the “Wheel of Fortune” team at Sony’s Studio in California, where they sort through applications and select people for auditions.

“It did not matter if you were on stage and solved the puzzle, or if you made a fool of yourself by cheering for your mother in the corner,” Erin Brockmeyer said. “Everyone had an equal chance to have their application reviewed in LA.”

A month had passed by, and it was now July, and Brockmeyer had completely forgotten about her application which was submitted that day, despite not making it on stage.

“I checked my email and there was a message about being selected for an audition,” she said. “I thought the email was not real!”

The audition was step two of three in Erin Brockmeyer’s journey to participating in a national taping, and it took place in a hotel in Baltimore. She described herself as having been more standoffish playing minigames with around 60 additional auditioners.

Four hours later, three contestant coordinators dismissed the lot, holding back around 20 people they hoped to interact more with, Erin Brockmeyer being one of them.

“We then played more mini games, but this time we were to stand in a line up front, spin the wheel as if we were really playing, and then give our introductions like we were talking to Pat Sajak on TV,” she shared. “I was so ready to play.”

For every contestant, the next step was to wait two months for notification on whether or not you are selected as a contestant.

“If two months go by and nothing is heard, then you know that they appreciated meeting us and have the amount of contestants they need,” said Erin Brockmeyer.

She was then tasked with returning to life as usual, as she was not allowed to tell anyone about her audition per the show’s request.

“I bet you can’t guess who got a letter,” she said. “It was a lovely congratulations letter basically saying I am in the contestant pool for two years. Within that two years they could call me two weeks before the recording date, or a couple days before. Thus, we waited again.”

This past January, just as she began getting ready for a full-time internship at an elementary school, taking Praxis exams and moving back onto campus, all while being co-president of the figure skating club on campus, Brockmeyer received an email with her taping date, set for this past February.

“I had a lot on my mind and then the universe threw me another one by sending me a glorious email saying ‘yay, we have a taping date for you,’” Brockmeyer recalls. “It’s a Thursday in February in Culver City. During internship? Oh no, terror ensues. I’ve really done it now boys.”

This time, Brockmeyer and her mom were headed to Culver City, California.

“One part that surprised me was how much larger the stage looks on television,” Erin Brockmeyer said. “The wheel was smaller than expected and there are so many different angles and monitors/screens you had to look at while playing. So, if you see me not looking in the camera like a gosh darn fool, it was because I was checking a screen!”

Also in awe of being on set, was Shirley Brockmeyer, who was a part of her daughter’s entire experience, and was ecstatic about the journey they went on together.

“It was a dream come true,” shared Shirley Brockmeyer. “An adventure I will never forget. Everyone involved was so friendly and patient. It was so surreal. I even saw a student from my very first class when I started teaching! He works for Sony Studios now with writing comedy shows and recognized us.”

For Erin Brockmeyer, her experience playing the game went by very quickly.

“During commercial breaks, the lovely make-up ladies would come over and fix my odd face the best they could, and we had our own designated water bottles, which got used,” she shared. “I was sick, so I loved the commercial breaks because I needed to cough the entire time. I know that sounds gross, sorry.”

While contestants can’t reveal if they received any prize money until after the taping, considering everyone on her episode was a college student, Erin Brockmeyer says the consensus seemed to be pretty clear.

“The joke throughout the day was we would all use potential earnings to pay student loans, and I would want to use the prize money for purchasing teaching materials for upcoming years,” she said.

Amanda Molino, a sophomore at Towson University, is excited to hear a fellow Tiger will be representing Towson on Tuesday.

“I feel like that’s really cool to be able represent the school on such a big platform,” said Molino. “That’s a really cool opportunity for her and her personal accomplishments but also for our school to be represented.”

“I hope she recognizes chances that are once in a lifetime and goes for them,” said Shirley Brockmeyer. “Take what life presents and have the courage to go for it.”