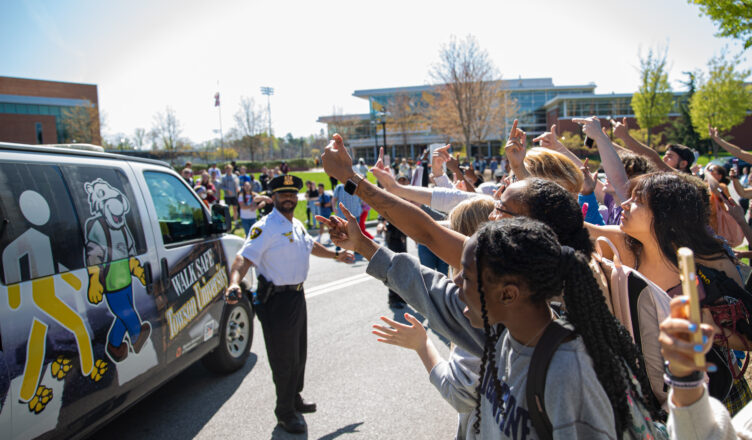 A group of five people occupied a spot on Towson University’s (TU) campus on Wednesday, April 20, holding up disturbing signs that TU students protested against. “Jesus or hellfire,” “Women belong in the kitchen,” and “Jesus still kills people,” are some of the signs that were held up.

A non-denominational Christian group called Key Of David arrived on campus to begin preaching out front of Burdick Hall shortly after noon. The group, led by Aden Rusfeldt, was comprised of Rusfeldt’s wife, his two young daughters, and two older men. Once Rusfeldt began preaching outside of Burdick Hall, the TU Police Department asked the group to relocate to public property not far from their original position.

As the group settled on the sidewalk along University Avenue, Rusfeldt became louder and students began to gather in opposition to him. Students representing the Student Government Association (SGA), Events and Conference Services, and the Tiger Advocacy Advisory Team were amongst the crowd handing out “Not At TU” pins as well as informational flyers about free speech on Towson’s campus.

“An event like this can make a student knowledgeable about their free speech and First Amendment right,” said Jordan DeVeaux, SGA president. “It is really important for students to be out here so they know that at an institution like this, we are in support of civil [discourse].”

Not long after a group of roughly 20 students exchanged with Key of David, TUPD advised Rusfeldt to move across the street onto the grass out front of the Towsontown parking garage next to the Liberal Arts building. The group moved because the crowd was growing.

“This is what students have the right to do,” said Phillips Hornbuckle, the Director of Center for Student Diversity. “This is how we are going to maintain safety and protect everyone, but the students have been excellent.”

Barriers were set up to separate students from Key of David with an eight-foot buffer zone, where SGA Director of Communications Elias Rodriguez threw “Not At TU” shirts and pins into the crowd and Anna Dieme, the Director of Health and Wellness, set up a Planned Parenthood information board.

Students engaged with the group for nearly three hours as organizations from all over campus arrived in support of each other.

“You’re seeing students from every walk of life out here and there is unity amongst all of us students and we are sharing the love because we all love each other, it doesn’t matter who you are,” said senior Kobe Highter. “This is home.”

Rusfeldt and his wife continued to wave signs regarding the LGBTQ+ community, accusing students of sexual misconduct and urging students to “read the Bible,” all while their two daughters played with toys under umbrellas in lawn chairs.

“I don’t necessarily agree with this as a way of preaching but I am game, I am a preacher, that’s why I tag along with Aden,” said Ron, one of the two men that were a part of Rusfeldt’s group. Ron would not provide The Towerlight with his last name.

Once students were able to figure out Rusfeldt’s first and last name, they began to ask him about $3.2 million dollars he was ordered to pay in restitution for fraudulent omissions in connection with ETF (exchange-traded fund) trend trading.

“That is fake news, not true,” Rusfeldt responded.

The two men that were with the Key of David group left after learning about Rusfeldt’s fraudulent past. When asked about the $3.2 million dollars he was ordered to pay, Rusfeldt smiled and said, “I wasn’t always a Christian.”