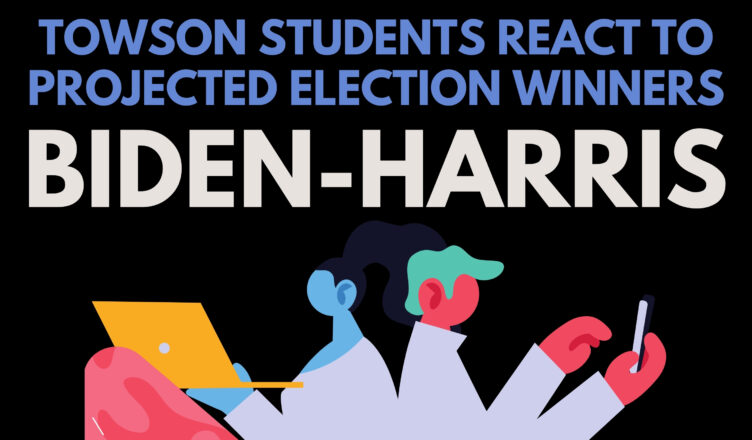 Democratic presidential candidate Joe Biden is the presumed president-elect after various news sources have announced Biden as the winner of swing states Pennsylvania (PA) and Nevada (NV), along with Vice President-elect Kamala Harris. The wins bring the Biden-Harris ticket to 290 electoral votes, while current President Donald Trump currently stands at 214.

The election results came after a tumultuous voting process caused by the pandemic, which led to an increase in mail-in and absentee ballots, delaying voting counts for states like PA and NV. The race against Trump has fueled divisive opinion, including those at Towson University.

“These results show that the people have spoken and that democracy has won,” Sarapi said. “We look forward to seeing how President[-elect] Biden will lead the country through COVID-19, climate change, and the human rights issues that have been overshadowing the true values of the United States.”

TU President, Kim Schatzel, took to Twitter to reflect on the historical significance of the election.

“In an election that produced many historic firsts for our nation, @JoeBiden set voting records on his way to being declared President-elect & 46th President of the United States,” Schatzel tweeted. “@KamalaHarris opened the door that has been closed to so many since the founding of our country — as she was elected the first Black, first Asian-American and first woman to serve as our nation’s Vice President.”

Senior Kenny Dustin is a registered Republican who was in support of Democratic primary candidate Andrew Yang. Dustin feels that one of the main concerns in this election is the possibility of voter fraud*.

This concern stems from claims made by Trump that wide-spread voter fraud tied to mail-in ballots has occurred, particularly in states which have flipped from red to blue, such as PA and Michigan (MI).

“I think voter fraud could be a serious issue in this election,” Dustin said. “I think we should do our best to recognize and prevent discrepancies in our electoral process. Whatever the outcome, if the election is decidedly free and fair according to the courts, I’ll be happy with the results.”

TU Alum, Dashiell Timothy, made light of the situation on Twitter.

“Trump better be glad he didn’t live on campus at Towson … HRL would have sent him an email saying he got until the end of the day tomorrow,” he tweeted.

Sophomore Sarah Skordas defines herself as a left-leaning moderate, and shared that the results have lifted anxieties she had.

“This is a lot to process,” Skordas said. “After the anxiety of the past four days I almost can’t believe this is real yet.”

Ashlee Daniel tweeted that the news of Biden’s PA win gave her two things to be excited for.

“BIDEN WON AND I GOT ACCEPTED TO TOWSON, TODAY IS A GOOD DAY,” she tweeted.

“We look forward to the Biden presidency and for [Harris,] our woman vice president to represent women of all backgrounds in the White House,” she said.

*As of now, no such voter fraud has been confirmed, though the Trump administration is still in the midst of legal battles in key states such as PA and MI. So far, election officials have cited the flip as a result of more Biden supporters opting to vote by mail, the batch of votes being counted now, with Trump earning more in-person votes, which were accounted for first.

– The Towerlight will continue to follow the election, and community feedback, as votes continue to be counted across the U.S.