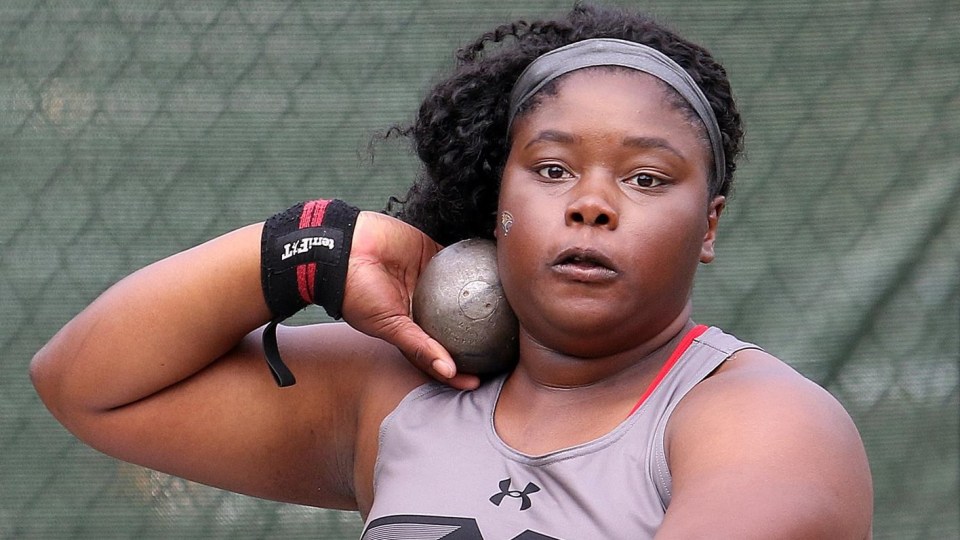 Junior Lauren Coleman won gold in the shot put for a second consecutive year with a 51-0 mark. She was named Most Outstanding Field Performer of the Meet.

“She’s been great all year and it culminated into this championship,” Head Coach Mike Jackson said. “She also stepped up in the discus, which is probably her favorite event, and has really done a great job. She’s a champion, so she deserves the accolades that she’s getting.”

Senior Megan Kelly also secured a gold medal as she posted a time of 59.30 seconds in the 400-meter hurdles, earning a gold medal in the event for the second year in a row.

“It’s something to be said about having done it before,” Jackson said. “When you’ve done it before you know that you have an opportunity to do it again, and she did show that she is one of the best in the conference in her events. She works hard. She works for it and there’s no surprise that she was going to do it.”

Junior Victoria Jones-Alleyne took gold in the 100-meter hurdles with a time of 13.84 seconds. She is the first Tiger to win this event since Ashley Adams in 2010.

“She’s very talented,” Jackson said. “She’s gone under 14 seconds a few times this year, so she’s done an amazing job with her work ethic, and she’s serious about being successful and she showed why she’s so good.”

Sophomores Jamila Brown and Helnsarah Penda along with juniors Liz Reid and Arianna Waller took gold in the 4×100-meter relay for the first time in school history with a school-record time of 45.65 seconds.

“They’re talented,” Jackson said. “We had been running a lot of different combinations of relay and this was no different, but this seems to be our best team and we had a great performance on the right day and finally were able to win a relay at conference.”

Northeastern won its first CAA Championship in just over a decade with 150 points while Elon placed second with 148.50 points. Delaware finished fourth with a total of 116.50 points.

“Everyone gave effort and [it’s] definitely disappointing when you don’t win,” Jackson said. “We were third by 14 points. I think we have established respect in the conference and around, and as a program we always want to compete hard and give our best.”

Up next, some of the team’s athletes will travel to Princeton University to compete at the Eastern College Athletic Conference (ECAC) Division I Outdoor Track and Field Championships. The event runs May 12-13.