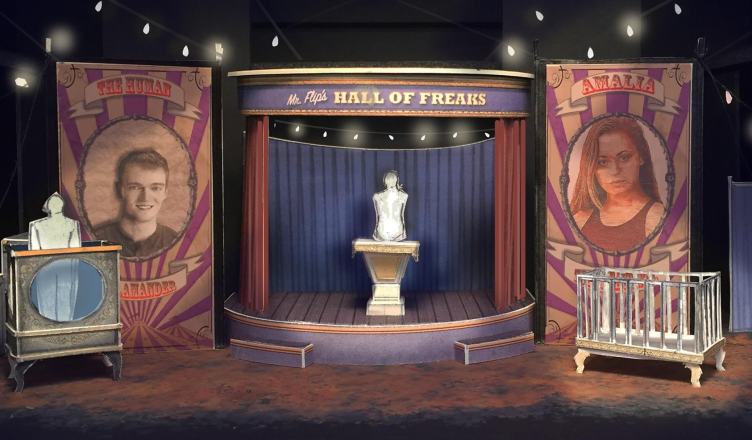 Towson theatre professor Steve Satta is directing “Freakshow,” a play by Carson Kreitzer that will hit the Center for the Arts’ Studio Theatre in early December. The following is a Q&A with Satta regarding Towson’s production of “Freakshow” and how the play might fit into our lives—personally, politically and otherwise.

What is “Freakshow” about?

The plot is pretty simple in many ways. It’s a play about a freak show, Mr. Flip’s Freak Show and Traveling Jungle, which meant that in addition to the freaks—I’ll just keep using that word because it’s the word the play uses, although we all know we don’t call people with abnormalities or physical disabilities ‘freaks’—that in addition to the freak show, there were also animals and other kinds of curiosities. So it was somewhere between a circus and a freak show. And these were really popular at the turn of the last century and the late 1800s, P.T. Barnum made them really popular. So it’s Mr. Flip’s Freak Show and Traveling Jungle, and the world of the play is the freak show itself. And the characters in the play are dealing with personal challenges. Some of them are done being a part of the freak show and want to move on and feel like they can’t. Some of them are going to continue to be part of the freak show because they really don’t have any other options, and they’re dealing with what that means in terms of their perception of self and their perception of their ability to be self-determined in their life. What are your options if you have no arms or legs? And of course this is all a really big allegory for all of us in life who have to make choices about the extent we will work to fit in, the extent to which we don’t desire to fit into the mainstream, and the extent to which we feel like we can enter the mainstream but continue to be who we are. So it’s really about otherness, and it’s really about personal determination — self-determination of your life. You make choices that allow you to move forward in the world while still maintaining what is unique about yourself.

The play is extremely female-centric. I initially would refer to it as a feminist piece, but I think that’s not quite right. While all discussions of otherness are inherently political, I would say that the women in the play are very strong. They present a very non-patriarchal society, but the play itself isn’t political. The play itself does not make broad political statements. They’re much more personal statements and much more primal, or anthropological, rather than political statements about women and how women are often perceived and how women actually have to move through the world and so on.

I read the play five or six years ago and just fell in love with it because I felt like it was a beautiful story. A story that had a lot to say about what it means to be the Other in a society, what it means to create community, without getting overly political, without being thinly-veiled references to communism or any of those things. It really works on a very personal and human level. And in that way, I think it’s timeless and the audience will see the connections it needs to see between the story of the play and their current situation, or our current political or social moment, without feeling like they’re being preached to.

Do you want audiences to connect the story of the play to our current political situation?

Why did you choose to direct this play now?

I’m hesitating because there are so many reasons. Some of which are particular to the end of 2016, and some of which are ongoing interests that I have artistically, and ongoing issues in our country, things that have been going on, things we’ve been talking about for the entire 50 years I’ve been alive. So I think otherness is always an important thing for us to talk about as a society, with the rise and visibility of the transgender movement, with the sudden visibility of the Muslim faith, that as a nation of immigrants, it’s always important to continue to expand our embrace of The Other. And to keep checking in with our very human tendency to fear or shy away from people that are other than we are.

I think very few people can honestly say, “Wow, when I meet someone that’s nothing at all like me, all I want to do is talk to them and find out about them.” Most people tend to be like, “Oh that’s interesting. But I’ll look at that from over here. I don’t want to get too close,” which is what the freak show is. I’ve always been interested in otherness, and I think that’s always an important topic. It’s a very important topic on the college campus. [For] a lot of students, it’s their first time away from home, their first time meeting people from different countries, different faiths and so on, and how do you navigate that?

I also liked the play for our students because many of the people in the play are quite young. There aren’t a lot of characters that are like, 60 and 70, so for a student actor, that’s not a stretch they have to make. And even the characters that are older, clearly significantly older than our students, what that age really results in is a different kind of knowledge about the world. It’s not about being old. It’s about having had certain experiences that our students can reach toward. So it’s a good play for student actors, I think.

With all the talk in the past couple of years about female playwrights and how few female playwrights are produced on Broadway and on major regional theaters…Carson Kreitzer being a female playwright and this being a very female-centric piece, that’s something I’ve been interested in lately, to sort of shift that balance of power in the theater.

What do you want Towson students in particular to take away from this play?

There are several moments in the play that have very specific sexual language. I think all of those moments are very important to the play—they’re not extraneous, they’re not there for shock value. They’re there because they’re saying something very specific, particularly about women and their sexuality. So I would, first of all, hope that students look past that specific topic to look at the larger thing that’s being said about gender, about sexual power, about sexual agency — how sex fits into life as an integrated and healthy part. And at this moment in time, I really hope people on campus take away the extremely powerful and positive femininity that’s presented in the play… Given everything that’s been happening around women’s rights, how women are treated, perceived, I hope that people come away from that with a kind of understanding and a depth of thought around those issues that will help them personally navigate what we are continuing to navigate as a society.

For the purposes of our play, we had to land in a more specific time frame because we had to know how to dress everybody for costumes. So doing some research, I decided to put it in 1905, because 1905 was a pretty significant moment in what was known as the American eugenics movement.

The eugenics movement was about people becoming aware of the idea of the gene pool, and being aware that there were elements in our society that were less than healthy, in their view, for our society. And people began to look at this scientific idea of Darwinism as a way to remove unwanted elements of the society. So people who were physically disabled, people who were mentally deficient—part of that movement was trying to use eugenics to rid the world of poverty, the idea that people who were living through poverty, families that had generations of poverty, that was somehow a genetic defect. [And] things like prostitution and alcoholism—so there was this scientific principle they thought could solve all the ills of society, and it was very interesting to see what they perceived as a social ill. That went beyond just the idea of people whose bodies were not formed sufficiently for them to live in the world, or people whose minds weren’t strong enough—people who would move through the world needing constant help, who couldn’t be independent. And so I think it’s very interesting to put a freakshow against that background.

Unfortunately, since we made that decision, that idea is becoming more and more relevant.

Things like systemic poverty, prostitution — it’s a little like the Magdalene Laundries of Ireland, where when young girls were either too pretty or too sexually alluring, or they seemed too confident and aggressive toward the boys they were interested in, they would just be packed off. Because a woman who’s aware of and finds power in her own sexual agency is dangerous to the world. So they would be shipped off to these homes for the feeble-minded.

It would be great if we could say that all those ideas were relegated to the dustbin of history and we all realize how completely corrosive they are. History repeats itself. Those who don’t know history are doomed to repeat it. So maybe if this brings up some history lessons for some folks, that wouldn’t be a bad thing either.