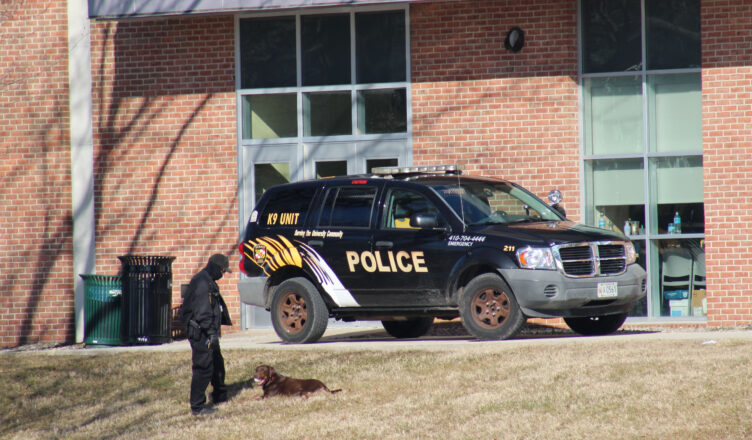 Through federally secured funding from the U.S Department of Justice, TUPD began equipping officers with body cameras in April 2021. All sworn-in TUPD officers, including supervisors and plainclothes investigators, are required to wear body cameras when interacting with the TU community.

The new body camera policy is a change from TUPD’s previous stance on body cameras. In 2016, under its former Police Chief Bernie Gerst, TUPD stated that the Towson University (TU) community did not have a necessity for body cameras on campus, and that they were too costly to implement at the time.

Sophomore Samira Jaouad believes the implementation of body cameras is a positive action by the department.

“I feel like requiring body cams for TUPD is a good step in general for safety reasons,” Jaouad said. “It might help reduce police violence due to them being recorded at all times.”

Although TUPD is implementing body camera usage on campus, some believe that this is not an end-all for systemic police-related issues. Sophomore Jane Charmatz does not believe that TUPD getting bodycams is not enough to prevent crime.

“I don’t think it will make an overall huge difference because reformation of the police system starts with prevention and caution of who we choose to be officers in the first place,” Charmatz said. “Body cameras will catch situations and be staple evidence, but in my opinion that does not reduce the risk of police brutality and more reformation needs to be done.”

Junior Erik Nilson says he has noticed a lack of information online on how to report student-officer incidents.

“With lots of incoming freshmen and new students on campus, I think it’s really important that students are educated on how to hold officers accountable if there is ever a situation that arises,” Nilson said. “Transparency is vital to a healthy relationship between the police and the community they serve.”