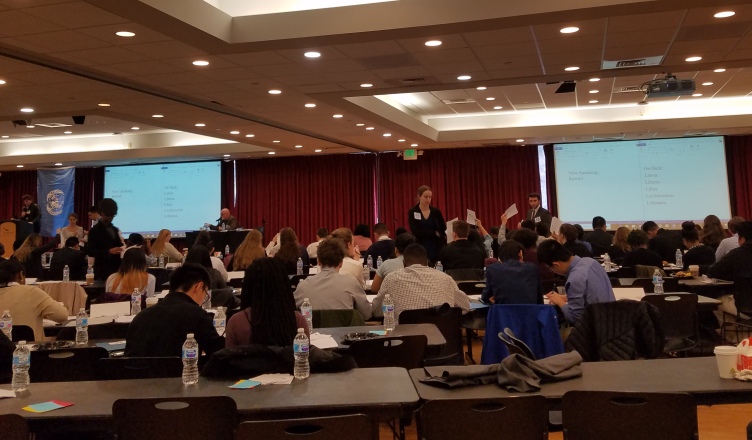 Over 200 high school students packed into the University Union Chesapeake rooms to negotiate solutions to civil war and refugee crises during the 16th annual Model United Nations conference at Towson University on March 3.

Unlike other Model UN conferences, Towson’s conference does not charge an individual student fee.

Kearney approached Towson University’s political science department in the summer of 2002 with the idea of creating a Model UN program that would accessible to students of all socioeconomic backgrounds, including those who could not afford the expensive entry fees of other conferences.

“The purpose of this opportunity is to give everyone, regardless of financial need, an opportunity to participate in Model United Nations and to have the eye-opening experience that people who go to the larger, very expensive conferences get,” Kearney said.

According to McCartney, students do not pay any fee, but each school pays a flat fee of $225 for up to 12 students and one teacher to participate in three days of Model UN events: the training day in November, and the two day conference in March (one conference day this year). For any additional students or teachers, schools can pay an additional $20 per person.

“I didn’t realize how big it would get,” McCartney said.

Although the conference was planned to be a two-day event, it had to be condensed into one day after Baltimore County schools closed on March 2 due to inclement weather conditions.

Still, the conference plowed ahead Saturday as 110 of the 193 countries that are part of the actual United Nations were each represented by two student delegates.

McCartney said she hopes the high school students gain an understanding of how difficult international negotiations can be.

“Every year, very few resolutions pass and [the high school students are] always surprised,” she said. “There have been years where nothing has passed and they wonder if they’ve failed. And I say ‘no, you haven’t failed. They didn’t pass for good reasons. They didn’t pass because you played the part that you were supposed to play and didn’t make unrealistic trade-offs.’ So I’m hoping they get this better understanding of the real difficulties in coming to agreement on an international stage.”

McCartney also hopes the conference will help students sharpen their skills when it comes to researching, writing, debating and learning about their assigned countries and other nations.

In addition to those traditional academic goals, McCartney wants students to come away with a can-do attitude as they approach their college careers.

McCartney said “building this sense of efficacy is really important, especially for kids at this age,” but that it has also been a valuable learning experience for Towson University students.

“When [TU students] are able to take the knowledge that they have developed here and teach others, they are also developing that sense of efficacy,” she said.

McCartney teaches a class called “Civic Engagement and International Affairs” which works directly with the high school students to prepare for the conference.

After the high schoolers found out who their assigned country was in November, they visited TU’s campus for a training day. Towson students gave the high schoolers an overview of the UN with group-based learning activities on current issues in the UN, and negotiation and diplomacy workshops. The high school students also gathered in regional groups to learn about that region from TU professors, according to McCartney.

Towson students from McCartney’s class also visited high schools in December to present projects on an organ or associated agency of the UN in which they evaluated the success of the agency’s mission and explored global-local connections of that agency.

TU sophomore and political science major Madeleine Henderson said she has enjoyed getting to interact with the high schoolers in the months leading up to the conference.

“We got to train the students last semester and they were all really cute and excited about Model UN and I really liked that,” Henderson said.

“They all have to get up and talk, which they’re really nervous about…. They have to talk about very difficult issues. This year they’re talking about civil war and refugees. They’re going to learn a lot,” she said.

Carver Center 11th grader Molly Gaither said this is the second year that she has participated in the Model UN conference. Gaither, who represented North Korea, said the conference has helped her become more comfortable with speaking in front of people.

“Before the conference, especially last year, I had a lot of public speaking issues,” she said. “But I feel like I’ve overcome that a lot. I went and read the preliminary statement today.”

TU junior Ezihe Chikwere, who is majoring in international studies and political science, said Model UN prepares students to be civically engaged citizens and members of the international community.

“I feel like people often confuse civic engagement with only doing volunteer work and community service,” Chikwere said. “But really civic engagement is just participating in political discourse or any type of discourse. For the students to be able to come together and discuss worldly topics that they don’t even realize apply to them, and me being able to help initiate that, is everything.”

Jacob “Kitchi” Lev, a 10th grade student at Western School of Technology and Environmental Science, represented Austria in the conference. Lev said being part of Model UN has expanded his worldview.

“I see most people in high positions of power as very singular, and so they don’t often think about what they do before they do it,” Sunday said. “But this brings a new light as it shows that people often have very varied ideas before doing something.”

Towson’s Model UN program is especially close to the heart of Hayley Ressler, a world history and U.S. history teacher at St. Charles High School. Ressler has been part of the conference as a high school student participant, a Towson University student volunteer and now as a high school teacher.

“I love seeing the types of students who come out and do a really good job,” Ressler said. “You always have the students who are very passionate and people who have done their research and people who are kind of just winging it but still doing a good job.”

Regardless of whether students go on to pursue careers in international relations, Kearney said the conference broadens their cultural understanding of the world.

“With a worldview, they become more informed voters and better informed in terms of understanding the world on a day-to-day basis where they might not have that broader cultural understanding having not participated in [the conference],” he said.

Kearney has seen how far the Model UN conference has grown and how the students have grown with it over the years.

“It’s always nice to see the variety of kids that participate, and them stretching their minds and grappling with the issues,” Kearney said. “I think Towson has done a wonderful job in supporting us, as has Baltimore County, and I hope it continues for many years to come.”

McCartney credited the Model UN conference’s success over the past 16 years to the close collaboration between Towson University and the Greater Baltimore community.

“I would never have looked for any of this if [Kearney] hadn’t come to us with a need,” McCartney said. “I didn’t realize the need was there. But what has been wonderful at Towson, once that need was identified, was the ability here at Towson to fill that need…. This program really proves that we are indeed invested in our students and in our community, and you just don’t see that everywhere.”