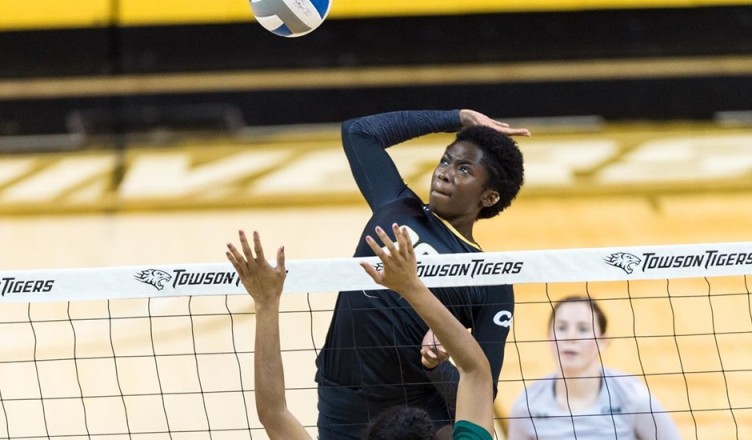 The Tigers are off to their best start in program history after sweeping the competition in the five-day Tiger Invitational at SECU Arena.

“We knew that coming into this weekend it was possible,” Head Coach Don Metil said. “The girls played very well and fought out, staying in a tight match and a match that went over the allotted amount of points.”

Sophomore outside hitter Annie Ertz led the way with a double-double while junior Jocelyn Kuilan added 13 kills from her right side position.

The Tigers tied the best start in school history with a 3-1win over Eastern Michigan (7-5) in the first game of Sunday’s double header.

“We knew we would have a couple difficult matches, the most difficult [being] Eastern Michigan,” Metil said.

Ertz and junior Peyton Moyles both recorded a double-double in the match. Wonders added 32 assists and Holehouse registered 21 digs.

“We are giving them the confidence to work through some things before we jump up, panic and call a timeout,” Metil said. “It’s a young team that will need to learn to handle these situations on their own for times we can’t call a timeout.”

In the third match of the weekend, Towson kept its hot start alive with a 3-0 sweep against Quinnipiac (1-12) Saturday night.

The Bobcats rushed out to an early 6-0 lead, but the Tigers charged back to tie the first set 8-8. Later in the set, the Tigers took a 14-9 lead before completing the comeback with a 25-16 victory.

Towson won the next two sets 25-20 and 25-14, respectively. Wonders put on an impressive performance with a match-high 22 assists.

Wonders led the team with 18 assists, while putting up eight digs. Holehouse finished with 11 digs and six assists.

Towson opened the weekend with a 3-0 sweep of California State Fullerton (4-6) behind  double-doubles from Wonders, Moyles and Biver.

The Tigers showed a balanced effort in the win. Nine of the 11 athletes to appear in the match recorded at least one kill, while holding the opponent to a .017 hitting percentage.

The Tigers return to competition on Friday, Sept. 15, as they travel to Rochester, Michigan, for the Golden Grizzlies Invitational. They will look to stay undefeated as they open play in the afternoon against Fort Wayne.