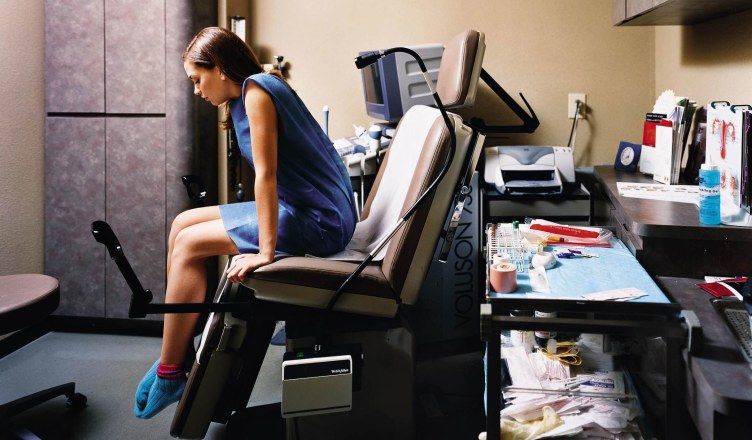 When I was about 16 years old, I tried to put in a tampon for the first time.

I had my period for several years at this time, but used pads as my form of protection. Using tampons was a much more difficult method for me, and I didn’t know why. I asked my pediatrician for advice, but to no avail. My mom brought me to her gynecologist to make sure everything was okay.

Lying on that table at such a young age, pants and underwear on the chair beside me, staring at the ceiling with a bright light at my private areas – it was humiliating. I was so young and naive. The gynecologist told me there was nothing wrong, I was “just anxious.” She suggested I try using tampons again but on a later, heavier day of my period. Surprisingly, this didn’t work either.

It wasn’t until I started seeing Maryam Awan, MD, an obstetrician and gynecologist in Cecil County, that I finally found some relief. She made me feel comfortable and safe on the cold inspection table. My legs in the stirrups felt completely normal after she assured me that it is. She was the doctor that decided to put me under full anesthesia in order to examine me properly. I was not able to handle the speculum or even her gloved fingers.

It wasn’t until later on that I learned that it wasn’t just me being “anxious,” that my difficulties were beyond my control due to a medical condition: vaginismus.

Vaginismus, a common but not well-known condition, occurs when a woman is unable to tolerate penetration in her vagina. Women with vaginismus cannot tolerate sexual intercourse, and in some cases, gynecological exams or tampon insertion.

According to Rosemary Basson, MD, a clinical professor at the University of British Columbia in Canada, vaginismus is the “involuntary contraction of muscles around the opening of the vagina…with no abnormalities in the [organ].” This happens even if the woman desires intercourse.

Basson continues, explaining that vaginismus can occur constantly in women with no relief, and develop gradually over time for others. For example, if a woman’s first time having sex is particularly painful, her body may react in the same fashion during any subsequent sexual encounters.

As someone who lives with vaginismus every day, I wish to share my experiences with the public to normalize the condition. It took three different doctors and nearly four years to diagnose me, claiming that I was “just anxious” or “scared of intimacy” when this is not at all the case.

There are two types of vaginismus: primary and secondary. Deborah Wilson, MD, a gynecologist certified by the American Board of Obstetrics and Gynecology, explains that primary vaginismus occurs “when vaginal penetration has never been achieved,” and secondary vaginismus is “when [penetration] was once achieved, but is no longer possible.” She says this is potentially due to trauma, radiation and sometimes issues with surgeries.

Bottom line: there’s no real cause or reason for vaginismus.

There are many treatment options for this condition, including education of sex, therapy and exercising. Relaxation techniques and hypnosis are other common therapies used to treat vaginismus. Feeling relaxed can help the woman feel more comfortable and safe with intercourse.

Relationships are tricky enough as is. When you add in the inability to have penetrative sex, a whole new barrier can create ridges. What’s important is to keep communication open and honest. Many women attend counseling with their partners as part of their treatment to not only educate partners, but to create a safe space for honesty.

My boyfriend has been so careful and understanding through this process. At 18 years old, we were eager to explore our sexualities. Now at the age of 22, we know what is and what is not possible for us right now. Keeping open communication and letting each other know what feels good and what doesn’t has made a world of difference in our personal relationship.

Vaginismus is not the end of the world. There are plenty of other ways to be intimate with a partner. According to a 2017 survey by Women’s Therapy Center, of 1,460 women with vaginismus surveyed, 40 percent were single or in a relationship and 60 percent were married.

If you have vaginismus, you are not alone. Women’s Therapy Center estimates nearly 947,000 women suffer from vaginismus. Women just don’t talk about it. So speak up and spread the word that this is a totally normal condition and nothing to be ashamed of.