When most people hear the word, “rape,” they become unsettled, uncomfortable and disturbed. Even just reading it is a little startling. But Roosh Valizadeh isn’t like most people.

Valizadeh is an author, supposedly from Maryland, who writes about picking up women, sex, and “neomasculinity,” according to his website, Return of Kings. He wrote a blogpost about rape, in which, to summarize, he stated that in teaching men not to rape women, we are teaching women not to care about rape, i.e., not to protect themselves. Kind of a hefty claim.

His solution to this “problem”? Make rape legal if done on private property. Yikes.

Let’s back up a little bit to see how such an idea formulates in someone’s mind. For starters, Valizadeh isn’t happy with modern women and feminism at all.

As he states in an interview with Ezra Levant, “sheep need to follow a shepherd,” but that the sheep, (women), “are being led astray by the wolves,” (feminists). That “women are now being taught to go against their natural roles, feminine, nurturing, motherly roles, to become a beast of something where they mutilate themselves, become masculine, they color their hair green, they argue with men…”

He continues his misogynistic rant by saying that, “Right now we have the most irrational, illogical breed of women. They are lost.” He says that women could have been “pleasant mothers, wives, would have taken care of a nice home, and instead they’re tattooing their bodies” and “sleeping with a lot of men.”

Sleeping with men AND arguing with them? How dare women act like humans capable of formulating opinions and desires. For shame.

Now, this interview and the blogpost took place back in August. So why is this relevant? Because Valizadeh scheduled an “international tribe meeting,” on Feb. 6 for men to meet up and discuss these issues. That was this past Saturday, and two meetings were to take place in Maryland.

However, the meeting was canceled because the men didn’t feel safe. The men, being lead by a man who thinks the rape of women should be legal, did not feel safe. How about that.
Roosh Valizadeh is currently in hiding after his unsettling opinions reached the public eye.

Apparently people aren’t too keen on a guy who suggests that rape should be in any way legalized, and he’s been receiving death threats. I guess he didn’t realize just how scary wolves can be. 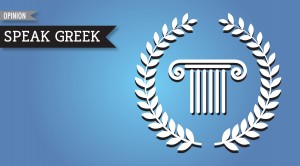