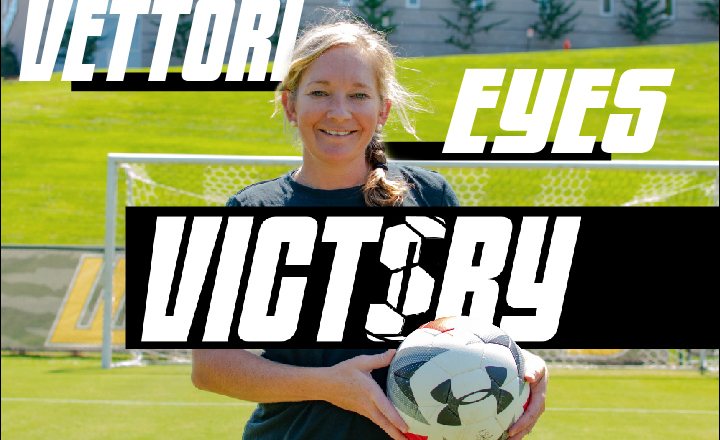 Head Women’s Soccer Coach Katherine Vettori was in the midst of an olympic soccer festival during her senior year at Duke University when she got a call from an unfamiliar voice.

Patrick Baker, the women’s head soccer coach for the University of Pennsylvania at the time, reached out to Vettori to convince her to join him at the school as an assistant coach.

Over two decades later, she still refers to her entrance into the coaching world as an accident, but interacting with a variety of players over time has made her 22-year coaching career a happy accident.

“The soccer piece is really small,” Vettori said. “It’s the relationships that last a lifetime. When my former players drop by with their babies or I get invited to weddings and baby showers, that’s what brings me the most joy.”

Not only was Vettori’s first coaching job achieved in an unorthodox fashion, but her initial desire to pursue soccer happened unexpectedly as well. She said that her parents knew nothing about the sport, but she was drawn in just from playing the sport in school and with other kids around her neighborhood.

Vettori started working at soccer camps at the ripe age of 14, and continued to do so throughout college as well.

Once she accepted Baker’s offer to become an assistant coach at the University of Pennsylvania, she also took on the duty of being an assistant academic adviser. She worked with the head of academic advising to monitor the academic progress of 34 sports at the school including football, basketball, soccer and crew.

In her second season on the job, she helped lead the team to their first ever ECAC Championship on top of an impressive 14-5 record. Following two years at Pennsylvania, Vettori moved on to join the University of Maryland as an assistant coach for three years.

She said that early on in her coaching career, University of Oklahoma’s Head Women’s Basketball Coach Sherri Coale was a huge influence.

Vettori said she played basketball under Coale for four years at Norman High School in Oklahoma. She said that Coale instilled determination and a relentless pursuit of competition during her time in Oklahoma.

“She was so motivational,” Vettori said. “There would be a point where I was self motivated. I didn’t need her motivation. I’d be so motivated that I’d start the game and she’d take me out to have to put me back in check. She pushed me in ways I’ve never been pushed before.”

After her stint at the University of Maryland, Vettori spent seven years as a director of coaching and player development for the Soccer Association of Columbia (SAC), which is based in Columbia, Maryland.

She said that overseeing the development of approximately 3,200 girls improved her ability to evaluate talent and the wide age range of SAC gave her an opportunity to interact with a diverse group of people.

Vettori stressed that seeing players grow on and off the field is always satisfying. She said that she remembers coaching a girl named Imani Dorsey when she was seven-years-old and recommending her to travel teams.

Now, Dorsey is a professional soccer player for the Sky Blue FC of the National Women’s Soccer League.

“It’s so rewarding when someone like that who is a great, humble, hard-working kid goes on to be an All-American and is playing professional now,” Vettori said. “That brings joy [and] brings it all full circle.”

After her time with SAC, Vettori got her first head coaching job at Loyola University Maryland. In five seasons at the helm, she led the team to four Metro Atlantic Athletic Conference (MAAC) title berths in five seasons including two titles in 2009 and 2012.

During her tenure at Loyola, Vettori also served as the director of coaching and player development for the Towson United Girls Soccer program, which provides recreational and travel soccer teams for the Baltimore area.

Vettori said that the program started with seven teams, but is now up to nearly 20 teams. She said that it has been enjoyable to watch the organization grow, but the development of the players is the most gratifying.

“The future is early and it’s bright for a lot of these kids,” Vettori said. “We’re getting them early and started right with a lot of technical training. It’s going to be fun to see them grow.”

Due to Vettori’s roots with local college coaches and youth players, VESA recently began to integrate college placement into the program to help guide athletes to fitting schools.

“It’s giving me the best of both worlds [being able to] stay in touch with the youth while I can and being connected with the college side,” Vettori said.

In January, Vettori was named the head women’s soccer coach for Towson and she said her main priority is to establish a culture of competing with high energy. The Tigers have posted a 24-40-12 record over the last four seasons and look to rebound this season.

She noted recruiting as a significant factor in turning the program around, sharing that she wants the best local players and is willing to bring in international recruits as well.

Vettori said she understands that there will be growing pains, but argued she is hopeful that results will come in due time.

“Establishing [positivity] and joyfully participating every day and looking at stepping on the field as our recess [is the goal],” Vettori said.