After a weekend on the road, Head Coach Don Metil is looking at his team’s most recent performances with a “glass half full” attitude after the Tigers defeated Hofstra on Friday afternoon but fell to Northeastern Sunday.

The Tigers got off to a slow start in Hofstra, dropping the first two sets to the Pride. Down          2-0 in the match, they turned things on in the third round and started to claw their way back.

Seniors Jocelyn Kuilan and Olamide Sonuga each contributed with a pair of kills, and junior Olivia Finckel helped to dominate the right side.

In the fourth set, Towson was down 22-20 and on the verge of losing the match until they went on a 5-1 run to secure another win and force a fifth set.

Towson went on to win the fifth set thanks to another 5-1 run and shut down defense by Sonuga, who had seven block assists throughout the match. The win at Hofstra means that the Tigers finished 1-1 against them this season.

At Northeastern, Towson came out firing, but dropped the first set 26-24. The Tigers won the next two sets thanks in part to a strong showing by junior Annie Ertz who had 22 kills.

Up 2-1, the Tigers couldn’t hold on, and they dropped the next two sets to the Huskies. In the fourth set, the competition was close with multiple ties before either team reached 20 points. The Huskies pulled off a 6-2 run at the end to pull off the win and force a fifth set.

Late in the fifth set, the Tigers were down 13-12, but the Huskies put two more points on the board and secured the win, which denied Towson a chance to even out their record against the Huskies who previously beat them in late September.

“We’re in a position where we are still hoping the team will fire on all cylinders at the same time,” said Mitel. “We’re kind of just right in the middle, still trying to keep our heads above water.”

The team travels to Delaware State University on Wednesday, Oct. 23, before they embark on their southern trip when they face the College of Charleston and the University of North Carolina Wilmington. 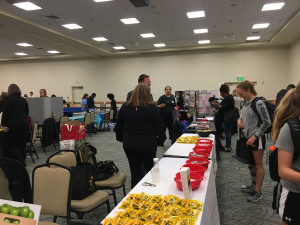