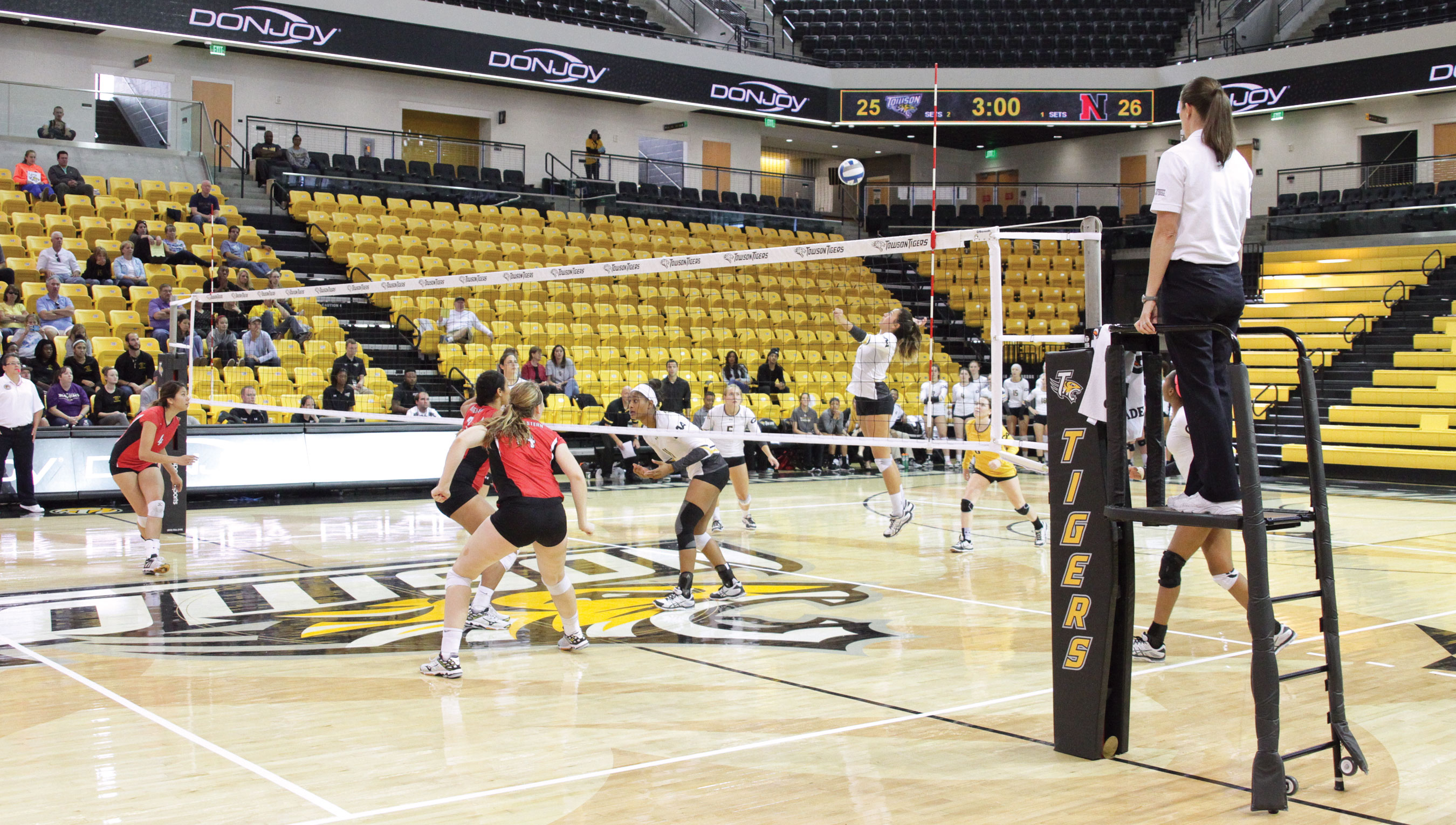 “It’s really awesome when we get to play at home,” redshirt junior Candace Steadman said. “I think it’s a really good environment to play in and the fans really help out with how we play.”

Later in the set, the Tigers went on a 5-0 run to take a 22-16 lead and won eight of the last nine points to clinch the victory

“We can’t really take anyone lightly,” Steadman said. “We just come out and play hard as we always do and try to get a win.”

In set two, Towson and Northeastern exchanged points and were tied 3-3 early. However, the Tigers went on a 5-0 run in the middle of the set to take a 14-7 lead before clinching the set 25-16.

“Northeastern definitely has a really good outside,” Head Coach Don Metil said. “They run a lot of crossing patterns so we had to find their attackers and make sure our blockers blocked accordingly.”

The Tigers jumped out to an early 4-1 lead after going on a 3-0 run. However, the Huskies battled back, forcing the Tigers to go on a 3-0 run to close out the set and earn the win.

In Friday’s victory over the Hofstra Pride, Towson won 3-0.

In the middle of the set, the Tigers and Pride remained neck and neck until Towson went on a 4-0 run and scored on six of its last seven opportunities to earn a 25-23 win.

“The first thing I saw was a lot of sloppiness, we had so many careless unforced errors,” Metil said. “It was amazing that we were in the game through the middle of the set. Luckily we turned things around and played a little bit better but there is no need for us to come out and be that tight in our own gym.”

“In the second set we just had to call a timeout because we were trading points,” Metil said. “It was just a reminder to take care of the ball and to be error free. After the timeout they came out and were more efficient.”

In set three, Towson took an 8-3 lead over the Pride thanks to an early 6-0 run. While the Tigers took an early lead, the Pride battled back and took a 15-14 lead in the set. However, the Tigers earned a 25-22 win.

“In the locker room postgame I said if anyone doubted us inside or outside of our own program, I think we made believers out of a lot of people tonight,” Metil said. “Even in our own team we have the ability to go a long way in postseason play if we are fortunate enough to make it there.”

Towson will be back on the road next week and will take on UNC Wilmington Friday and College of Charleston Sunday.