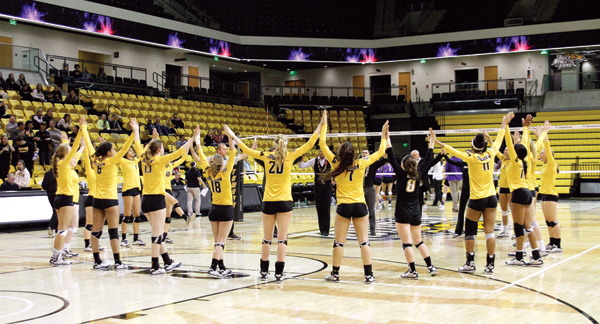 Towson was crowned the Co-Champions of the Colonial Athletic Association and earned victories over Delaware State Sunday and James Madison Friday.

“We accomplished a lot,” Head Coach Don Metil said. “We proved that we are one of the best teams in the CAA, but we still have a little bit of work to do.”

Sunday, the Tigers defeated the Hornets in Dover, Delaware, 3-1.

While the Hornets cut the Tiger’s lead to just two points after going on a 4-0 run, the Tigers won seven of the last eight plays to earn the win.

Later, Towson went on a 5-0 run to take a 19-11 lead before senior Haley Pa’akaula secured the match with a game-ending kill.

Friday, the Tigers swept James Madison on senior night on their way to a 3-0 victory.

“It was awesome,” Pa’akaula said. “SECU Arena is such an amazing place. I am going to miss playing here but it was good to go out like this.”

In set one, Towson earned a 25-20 win over James Madison.

“It’s always nice to have breathing room,” Metil said. “I think that we were so efficient offensively tonight. James Madison played better as the night progressed, but we looked at the box score a couple times and in the second set and we earned 23 of the 25 points that were available. So our offense was pretty potent tonight.”

Late in the set, James Madison fought back and cut Towson’s lead to 20-15. However, Towson outlasted James Madison’s late push to secure the victory. Freshman Jocelyn Kuilan finished the set with five kills while junior Jessica Lewis was right behind her with four.

“They’re awesome as always,” Pa’akaula said. “Jocelyn and Jessica together just open up so many opportunities for other hitters. They are just amazing to play with.”

“We always talk to our girls about sticking to the game plan, and it’s hard because we give them a lot of information, but also the ability to modify the game plan if needed,” Metil said. “So, we were successful in the middle and all of the sudden James Madison started putting up a triple block and that was when we knew we could start moving the ball around in the middle.”

Towson opened up an early 3-0 lead over James Madison thanks to a kill and a service ace from senior Haley Pa’akaula followed by a fill from junior Jessica Lewis.

Later in the set, the Tigers went on a 3-0 run and extended their lead to 17-12 after a James Madison service error and kills from Pa’akaula and redshirt junior Candace Steadman.

Towson closed out the set and secured the win after going on a 2-0 run on thanks to a pair of kills from Steadman.

“After that second timeout, I spent some time at the bench just looking at data and found out who their weakest blocker was,” Metil said. “And we got that matchup with Jess, we shifted her over to the right and she was able to put that last ball away for us which was fantastic.”

Set three started similar to set one, as both teams battled back and forth for the lead. Early in the set, the Tigers and Dukes were tied 7-7.

However, Towson won five of the next six plays thanks to five kills to take a 12-8 lead over James Madison.

The Tigers eventually completed the sweep when Dukes server Janey Goodman committed a service error to end the game.

Saturday, Towson will take on the winner of William & Mary and UNC Wilmington in the semifinals of the CAA Championship tournament in Harrisonburg, Virginia.

If the Tigers win, they will move on to the championship game for the right to make an appearance in the NCAA tournament.

“It’s going to be an exciting team to watch in the postseason,” Metil said.