Towson competed in the Crowne Plaza Philadelphia West Penn Invitational this weekend and stretched its winning streak to ten games with victories over Fairfield, Penn and Binghamton.

“We’re definitely off to a good start, we know there’s going to be some adversity ahead with conference play just two weeks away,” Head Coach Don Metil said. “But the young kids are playing well and we have had other kids step in this weekend and showcase their skills.”

In game one of the tournament, the Tigers defeated Fairfield 3-1.

Towson took the first set of the match 25-19. The two teams traded a pair of 3-0 runs before the Tigers pulled away late in the match after going on a 6-0 run.

“We knew that they were going to be pretty heaving on the outside, a lot of their production and points comes from their outside hitters,” Metil said. “In our blocking in the Fairfield and Penn match we executed at a high level in regards to our ability to block the ball.”

“Blocking the ball was part of our game plan going in, we had worked on it all week and we definitely improved our ability to block the ball,” Metil said.

After dropping the third set of the match, Towson earned a victory in its fourth set 25-17. The Tigers used a flurry of three-point runs to increase their lead over Fairfield before pulling away late in the match.

In game two of the tournament, Towson defeated Penn 3-1.

“This weekend also allowed us to see some weaknesses that we still have to work on to continue to improve our consistency,” Metil said. “I think we’re playing decent volleyball, I don’t think we have played our highest level of volleyball we can just because of those circumstances we are still dealing with.”

Towson dropped game three of the match 25-20 but rebounded in game four to secure a 25-23 set victory and its ninth straight win.

Against Binghamton, the Tigers earned their 10th straight victory after sweeping the board winning all three matches against the Bearcats.

“They have one really good hitter that we were concerned about. It took our girls a little bit of time to follow and execute our game plan,” Metil said. “But as the match progressed we were able to remind them that even though the game plan might not feel like it’s working if we can do it over time we will be able to break them down.”

Towson will participate in its final tournament of the season, the Tennessee Tech Tournament next weekend in Cookeville, Tennessee.

“We need to get back in the gym and work on our ability to control the ball which we were very questionable at times doing this weekend,” Metil said. “We just need to work on our eye work and make sure we’re seeing the game and anticipating the potential shots or serves.” 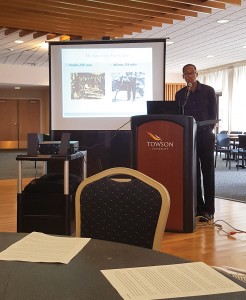