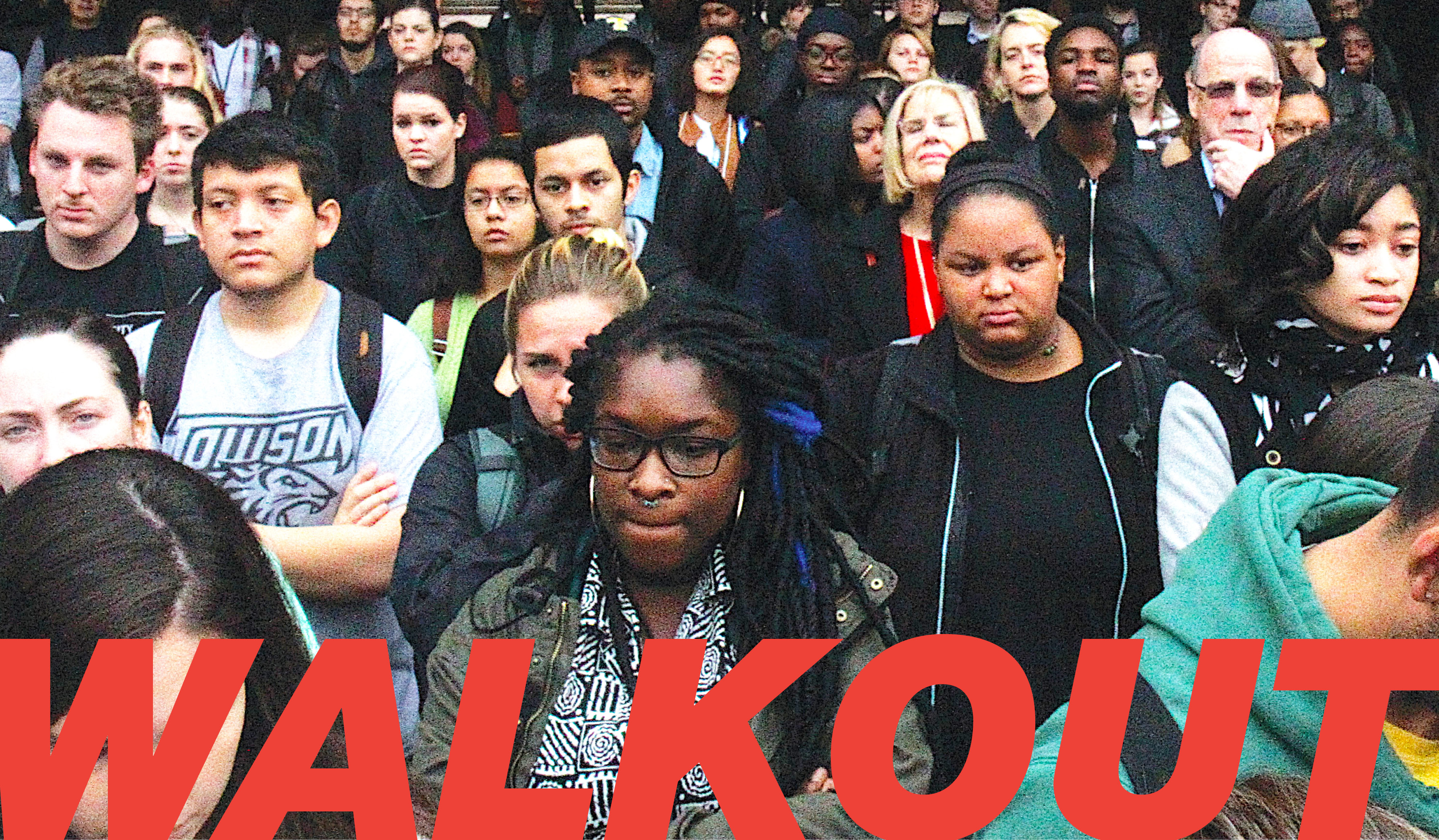 At Monday’s rally in Freedom Square to “stand against Trump’s hatred,” one student said what many must have been thinking: “If you voted for Trump, fuck you.”

And then, from a Trump supporter: “Fuck you too.”

For a brief few moments, the otherwise orderly gathering of faculty, students and staff, assembled because of the impending Donald Trump presidency, erupted into chaos.

The first student, Saraubi Harrison, had been railing against people who supported President-elect Trump, calling them selfish for not wanting to “share rights.”

At one point, the supporter, whose conversation with Gerst had been mostly drowned out by chanting from the crowd, could be heard saying, “they’re saying fuck you to people!” and looked like he was in disbelief.

After a few seconds, it appeared the man agreed to leave. There was a brief altercation between he and another student, so he, the Trump supporter, spoke with Gerst again.

As he was almost gone, someone yelled, “We’re here to support minorities, do your part!”

The Trump supporter turned around quickly, clearly frustrated. Gerst put his hand on him, but did not restrain him.

He was walked out by police, but not removed by them. Towson University officials said police were with him for his own safety.

Within five minutes, the rally was back on track. Students and faculty returned to sharing the space in Freedom Square to tell their stories and express their fears and worries about both the Trump presidency and the system of white supremacy that some cited as a cause for Trump’s election.

Simone Boyd, a freshman, said the gathering was “amazing.”

“As an African-American woman, it was very emotional,” she said. “It’s good to get the message out there and people need to be active, not just us.”

Towson University President Kim Schatzel was not present at the gathering, and some students were audibly disappointed when they learned she wasn’t.

Ray Feldmann, a spokesman for the University, said that TU “remains committed to its relentless pursuit of a diverse and inclusive campus and will not tolerate discrimination of any kind.”

Feldmann also reiterated the point that the rally was not organized or sponsored by the University. The Social Justice Collective, which is a group of mostly faculty committed to ideals of social justice, worked in alignment with various student groups to stage the walk-out.

Nicole Fabricant, an associate professor of sociology/anthropology and criminal justice, said she was “inspired” by what she saw.

“For years, my role on this campus has been quite frankly, to try to provide a space for students who, on a predominantly white campus, feel very much like there are things that other students say that are ignorant, or feel like the university doesn’t do enough to protect them,” Fabricant said. “So we’ve been seeing, and have been in, these kinds of struggles for a very long time on this campus, but I’ve never seen this many people come out.”

While the overwhelming majority of students in Freedom Square were opposed to the idea of a Trump presidency, there were a few students in Trump shirts or otherwise expressing their support for the president-elect.

Eric Hall, a sophomore, was carrying a paper sign that read, “Yes your president.”

“Basically, I’m trying to convey a message that we need to try to reunite,” Hall said. “I believe that is wrong to throw out these accusations that were being thrown out today because I don’t feel that it is right to brand 60 million people in this country as racist or hateful.”

Vice President for Student Affairs Deb Moriarty, along with a few other senior members of Towson’s administration, were present, but none spoke during the designated time.

“I felt like it’s not our event, right?” Moriarty said. “The faculty organized this, and they invited the students here, and it’s not about the administration.”

Moriarty said that the administration was working on organizing some programs, including a teach-in on Thursday, but that details were not immediately available.

“I think that we owe whatever students on this campus who are Trump supporters, we owe them the right to have their voices be heard,” Moriarty said. “We’re not going to know why ‘white America’ feels the way that it does if we’re not listening.”

In an interview earlier this week, Director of the Student Trump Coalition at TU Zack Stuehler said he thought protests against Trump’s election were frustrating.

“President-elect Trump has been elected. He’s going to be president. Nothing’s going to change that. That’s been set by our democratic process,” Stuehler said. “I feel like it’s really immature that  a lot of people just didn’t get their way, so they’re all out protesting in the streets.”

Student Government Association President Taylor James said she struggled with a long time determining what she would say if she spoke before the crowd.

“I just want to say to every person who has hate in their heart, there’s no space on this campus for you to be hateful,” James said during the gathering. “We’re not going to tolerate your hatred.”

James also called on students to speak up when they saw acts of discrimination or bias. If a bystander does nothing, she said, they are as much a problem as the person being discriminatory.

“The biggest thing was that I couldn’t go up there and be neutral,” James said in an interview. She said she felt like she had to take a stance and stand up for something.

In the coming weeks and days, different campus departments and student groups will be planning different actions, educational opportunities and other events. The Towerlight will update as often as possible with that information.

The Towson Freedom School, a student-led group that meets to “provide a space for Black Studies”  is scheduled to meet at 6:30 p.m. on Thursday to discuss white supremacy.

With reporting by Sarah Rowan and Taylor DeVille

One thought on “Walking out, standing up”